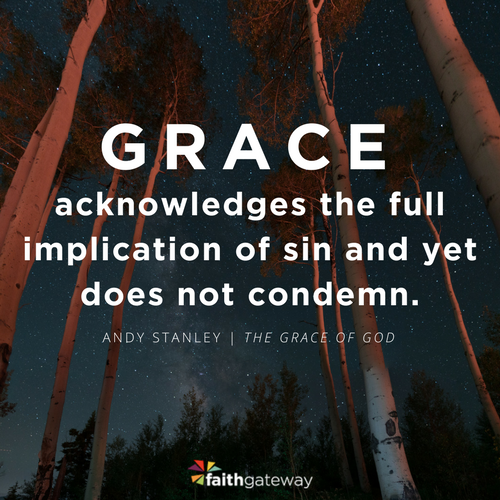 It’s what I crave most when my guilt is exposed. The very thing I’m hesitant to extend when I’m confronted with the guilt of others — especially when their guilt has robbed me of something I consider valuable.

Therein is the struggle, the struggle for grace. It’s this struggle that makes grace more story than doctrine. It’s this struggle that reminds us that grace is bigger than compassion or forgiveness. This struggle is the context for both. When we are on the receiving end, grace is refreshing. When it is required of us, it is often disturbing. But when correctly applied, it seems to solve just about everything. Contrary to what is sometimes taught, the opposite of grace is not law. God’s law is actually an extension of grace. The opposite of grace is simply the absence of grace.

To say that someone deserves grace is a contradiction in terms. You can no more deserve grace than you can plan your own surprise party. In the same way that planning voids the idea of surprise, so claiming to deserve voids the idea of grace. You can ask for it. You can plead for it. But the minute you think you deserve it, the it you think you deserve is no longer grace. It is something you have earned.

But grace can’t be earned.

To earn something is to find an equivalent. There is no equivalent where grace is concerned. Grace is birthed from hopeless inequity. Grace is the offer of exactly what we do not deserve. Thus, it cannot be recognized or received until we are aware of precisely how un- deserving we really are. It is the knowledge of what we do not deserve that allows us to receive grace for what it is. Unmerited. Unearned. Undeserved. For that reason, grace can only be experienced by those who acknowledge they are undeserving.

From the beginning, the church has had an uneasy relationship with grace. Yet history has shown that the church and Christianity in general fare best when characterized by grace. The church is most appealing when the message of grace is most apparent. Yet grace is often an early casualty in the world of organized religion. The gravitational pull is always toward graceless religion. Instead of defining itself in terms of what it stands for, the church often takes the less imaginative and easier path of defining itself in terms of what it is against.

The odd thing is that when you read the New Testament, the only thing Jesus stood against consistently was graceless religion.

The only group He attacked relentlessly was graceless religious leaders. So we should not be surprised when we get to the end of the Gospels and discover that the people who crucified Him were those who claimed to know God but knew little of grace. In doing so, they confirmed everything He said about them.

As we are about to discover, grace is not a New Testament idea. Grace didn’t begin with Jesus. But it was certainly personified by Him. John tells us that He was “full of grace and truth” (John 1:14; emphasis added). Not the balance between, but the embodiment of. John speaks of “the fullness of his grace” (John 1:16), the idea being that in Jesus we get as clear and as close a look as we will ever get of what grace looks like in an otherwise graceless world.

In Jesus there was no conflict between grace and truth. It is that artificial conflict that throws so much of Christianity into disarray. It is our misunderstanding of grace, as modeled and taught by Jesus, that leaves us feeling as if grace allows people to “get by” with things.

Grace acknowledges the full implication of sin and yet does not condemn.

The story of grace includes a broad range of characters — rich, poor, powerful, and powerless. For all of them, it is God’s grace that tips the scale in their favor. In some ways these stories are our stories. For like the individuals who populate the pages of Scripture, we, too, need grace.

But not just any grace. The grace of God.

None of us will ever deserve grace. Yet when we actually deserve condemnation and rejection, we’re extended God’s unrelenting grace every single day. And we’re invited to join Jesus in the lifestyle of grace even towards those who deeply harm us. Are you ready to be fiercely gracious? Come join the conversation on our blog! We want to hear from you! ~ Devotionals Daily