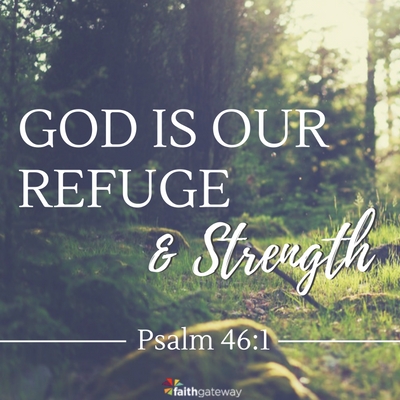 Victoria and the girls have been in a wreck,” my son-in-law, Ethan, told me over the phone. He said their van had veered off the road, slid down a hill, burst through a fence, and slammed against a tree. One of the kids found a cell phone on the floorboard and called him, saying, “We’ve had a wreck and Mommy’s asleep.” Paramedics were on the way, and so was Ethan, who suggested I head to the hospital.

It’s hard to describe the fear one feels in such moments. I struggled to stay calm enough to think, to tell Katrina, to find my keys and billfold and to pull out of the driveway. But just as the worst scenarios were stampeding through my mind, a passage of Scripture came to me. It was a chapter I’d been re-memorizing — Psalm 46:

God is our refuge and strength, a very present help in trouble. Therefore we will not fear… (NKJV)

Those words became my lifeline, and by the time I got to the hospital I was functional again — still frightened and upset, but able to respond to the situation. I identified myself to paramedics who were exiting the building and asked, “How are they?”

“They’ll be all right,” came the welcome answer.

My heart was still pounding like a sledgehammer as I visited one after another in their emergency cubicles, and it took a long time for us all to calm down. I hope to never again encounter such fear; but, of course, we can’t always avoid uninvited trauma. Events come unwelcomed and unexpected. But on that day, I was grateful for Psalm 46 and the strength it gave me as it rang inside my heart.

Words as robust as those of Psalm 46 don’t flow from ordinary events.

Something dramatic must have prompted the man who composed them. Many Bible scholars believe this psalm was written against the backdrop of the Assyrian invasion of Judah about seven hundred years before Christ.

In those days, a godly king named Hezekiah sat on the throne of Judah, and the prophet Isaiah preached regularly in Jerusalem. A sense of revival was in the air, but also a growing sense of foreboding. Rumors were reaching Jerusalem of a vast empire to the east, marching slowly but inexorably toward them — the invincible forces of King Sennacherib of Assyria. These invading legions represented the greatest military machine the world had seen — and the cruelest. Events were closing in. War seemed unavoidable, defeat inevitable, and everyone knew the Assyrians were merciless toward their victims.

When they reached the borders of Israel, the Assyrians swarmed in like locusts. The Northern Kingdom quickly collapsed and was destroyed forever. The Southern Kingdom of Judah was breached, the forward cities fell, the defensive perimeters crumbled, and the nation was occupied. Only Jerusalem remained, its residents trapped. According to the Bible, the city was surrounded like a hut in a cucumber field. Isaiah described the armies of Assyria as a flood that swirled over the land, passed through it, and reached up to its neck (see Isaiah 1:8 and Isaiah 8:8). Sennacherib had his own metaphor.

He had trapped Hezekiah, he said, like a caged bird.1

With victory imminent, Sennacherib sent an envoy to Hezekiah with terms of surrender. But Hezekiah wasn’t about to capitulate. In one of the most poignant scenes of prayer in the Bible, he took Sennacherib’s letter to the temple, spread it before the Lord, and beseeched God for help, saying,

It is true, Lord, that the Assyrian kings have laid waste these nations and their lands. They have thrown their gods into the fire and destroyed them, for they were not gods but only wood and stone, fashioned by human hands. Now, Lord our God, deliver us from his hand, so that all the kingdoms of the earth may know that you alone, Lord, are God. — 2 Kings 19:17-19

That’s the night God turned history on its head.

That evening a lone angelic warrior descended from the ramparts of heaven and destroyed the Assyrian army. In one night, 185,000 enemy troops mysteriously perished without a shot being fired. Secular historians cannot explain it. When I was last in London, I visited the exhibitions in the British Museum related to Assyria and King Sennacherib, including the Taylor Prism, in which Sennacherib later wrote of this event. He never explained why he didn’t take Jerusalem, capture its king, or defeat the nation of Judah. It’s a remarkable fact of ancient history that the steamrolling Assyrians somehow failed to capture Jerusalem or to make tiny Judah a province of mighty Assyria.

The Jewish nation never became part of the Assyrian Empire, which may explain why Sennacherib was later assassinated in his own house by his own sons.

Many scholars believe Psalm 46 was written to commemorate Judah’s deliverance, and that would explain its intrepid tone. That also explains why it’s so powerful for us.

If God could save Hezekiah and his city from annihilation, He can surely help you and me in the distresses and distractions of life.

If a single angel could rescue a nation, think of how the Lord and His angelic hosts can strengthen you. God is our refuge and strength, a very present help in trouble.

Excerpted with permission from The Strength You Need by Robert Morgan, copyright Robert J. Morgan.

Today, let’s memorize Psalm 46:1 and keep it with us for times of trouble when we’ll need to be reminded that God is our strength and we do not need to be afraid. Come share your thoughts with us on our blog. We want to hear from you about asking God for help when trouble comes. ~ Devotionals Daily