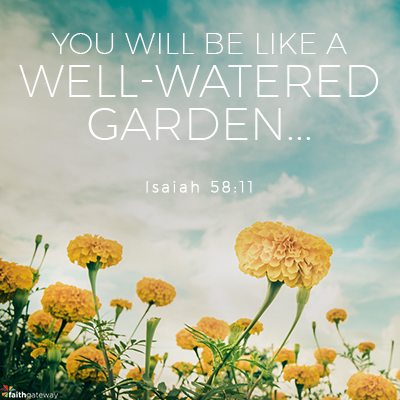 The Best Kind of Blessings

Isaiah ended his message by describing the best kind of blessings — what God will do in the lives of those who reflect His mercy.

Then your light will break forth like the dawn, and your healing will quickly appear; then your righteousness will go before you, and the glory of the Lord will be your rear guard. Then you will call, and the Lord will answer; you will cry for help, and He will say: Here am I.

If you do away with the yoke of oppression, with the pointing finger and malicious talk, and if you spend yourselves in behalf of the hungry and satisfy the needs of the oppressed, then your light will rise in the darkness, and your night will become like the noonday.

The Lord will guide you always; He will satisfy your needs in a sun-scorched land and will strengthen your frame. You will be like a well-watered garden, like a spring whose waters never fail. — Isaiah 58:8-11

As I analyzed this passage, I numbered ten different benefits that flood into the lives of those who exercise the right kind of compassionate faith.

First, your light will break forth like the dawn (Isaiah 58:8). You’ll be a bright and luminescent person, and the sunlight of the gospel will glow from your life.

Second, your healing will quickly appear (Isaiah 58:8). You’ll be able to stay emotionally healthy and look forward to eternal health and strength.

Third, the Lord will go before you and behind you (Isaiah 58:8). He will mop up all the problems of your yesterdays and precede into all the potential of your tomorrows. This reminds me of Psalm 139:5, which says,

You both precede and follow me and place Your hand of blessing on my head. — TLB

Fifth, your light will rise in the darkness and your night will become like the noonday (Isaiah 58:10). You’ll be noticed; you’ll have influence; in the darkness of this world, you’ll make a difference. The world will see your good deeds and glorify your Father in Heaven.

Sixth, the Lord will guide you always (Isaiah 58:11). He will show you what to do and help you with your decisions. I once listened to a young lady — a teenager — who had been rescued from certain death as an infant in the Ukraine and adopted and raised by a missionary family. During her testimony she made a statement so compelling I pulled out my pen and paper and wrote it down. She said,

Never be afraid to trust an unknown future to a known God. 1

You can trust Him with the days ahead, for He has promised to guide you.

Seventh, He will satisfy your needs in a sun-scorched land and will strengthen your frame (Isaiah 58:11). This is what Isaiah said earlier in chapter 30: “In quietness and confidence will be your strength.” This is what he said in chapter 40: “Those who wait upon the Lord will renew their strength.” This is what he said in Isaiah 41:10: “I am your God. I will help you, I will strengthen you, I will uphold you by My right hand of righteousness.” This is the promise of personal strength, which is why it’s at the heart of this book.

Eighth, you’ll be like a well-watered garden and like a spring whose waters never fail (Isaiah 58:11). Drive down the street during a drought and notice the difference between gardens that have been irrigated and those drying up. Those who practice the right kind of faith will flourish, for they have a divine Gardener with ever-flowing, overflowing streams of rejuvenation and refreshment. He keeps us emotionally hydrated and healthy.

As followers of Christ, we go by many names. Christians. Believers. The Church. The Body of Christ. Disciples. Children of God. Saints. When I was in college, we were called Jesus Freaks. But here in Isaiah 58, we have one of the greatest titles we could ever wear.

Finally, our lives will be flooded with joy (Isaiah 58:14). We’ll find our joy in the Lord, and God will cause us to ride in triumph on the heights of the land and feast on His inheritance (Isaiah 58:14).

These truths from Isaiah 58 are what motivated Alan and Dorothy Graham. After confronting dire human suffering in Romania, Alan told me, “I began reading in the Bible all God had to say about the poor and helping the needy. I saw what Isaiah said in chapter 58 about the true fast. It is to take care of the poor, and so Dorothy and I prayed about this and God spoke very clearly to us about returning to Africa. We had been there many years before. We hadn’t been Christians at that time, and I became an alcoholic there. My wife was going to divorce me, but then we turned to Christ and He turned our lives around. Now, years later, we felt God’s call to Zimbabwe.”

Alan and Dorothy secured a work permit, which in itself was a political miracle, and they entered a nation gripped in racism and turmoil. The country had descended into violence during the era of Robert Mugabe, and things had gone from bad to worse. Alan and Dorothy traveled into the countryside to teach at school, accompanied by their translator. The area was tense because disaffected war veterans were angry with white farmers and landowners, one of whom lived behind gates near the school. As the Grahams returned from teaching and passed the farm, their truck was suddenly surrounded by about 120 enraged men who began chanting political slogans and shoving their vehicle from side to side.

“Well, if we’re going to die,” said Alan, “let’s go out preaching the gospel.” He jumped into the back of the truck and coaxed the unwilling translator to join him while Dorothy prayed in the cab.

Alan shouted to the mob, “I’m not here to talk about Mugabe or about the opposition,” which further inflamed the throng. “But,” he said, “I’m here to talk about Jesus, and if you’ll shut up and sit down you might learn something.’”

In telling the story, Alan turned to me and said, “In a situation like that you’ve got to take authority, you see.”

Alan gained their attention long enough to preach the gospel. He told them Jesus was the answer for Zimbabwe’s problems and that Christ alone was the answer to their personal needs and problems. When he gave the invitation to receive Christ, twenty of the men indicated they wanted to receive Jesus as their Savior.

“I prayed with them and gave them New Testaments and booklets. Then I sent them home, and I said, ‘If anyone else wants a booklet, come and I’ll give you one.’ The men got in a line and I gave out all my material. As I bent over to retrieve the last booklet for the last man, the leader stuck a gun in my neck and said, ‘Pastor, it’s time to go back to Harare [the capital].’”

“Take your gun away,” said Alan. “I’m from Northern Ireland and guns don’t really scare me. Why do you have a gun to my head?”

“We want you going back,” said the soldier. “We don’t want you staying here.”

“Do you know what I do? I preach the gospel and help the poor.”

“We know. That’s why we’re giving you a chance to go back to Harare.”

The Grahams went back to Harare and learned the next day the remaining mob had murdered the nearby farmer after they left. But, undeterred, the Grahams went on helping the needy, feeding the poor, clothing the naked, providing school uniforms for children. They dug wells to provide water to communities. In one village they drilled a well and planned a day of dedication for the new water supply. A national pastor preached about the living water of Christ, and a thousand people received Jesus as Savior. “There’s a church of a thousand there now,” Alan told me.

A few years ago, Alan heard that in one community near Harare a sewer had become clogged and workers were sent to clear it. They found the bodies of twenty-five babies who had been thrown away, down the sewers.

“There’s a lot of incest and rape in Zimbabwe among the poor,” said Alan. “These little girls are having babies and they don’t know what to do. That deeply disturbed me, and shortly afterward I stood up in a church in Napa Valley, California, where I was speaking, and told them I was going to open a home for abandoned babies in Harare.”

Sitting in the audience, Dorothy was startled, and as soon as the service ended she said, “Alan! What are you doing? How are we going to start this with no money?”

Just then a lady tapped Alan’s shoulder and asked, “How much will you need for that?” He said he had no idea, to which she replied, “I’ll give the first $100,000 dollars to get it started.”

That was the beginning of the Jabulani home for abandoned babies. 2

“Isaiah 58 is a chapter I live by,” Alan told me. “God will strengthen those who keep His true fast — helping the poor and wrapping the gospel in a sandwich for the hungry. As I do what God tells me, my life is changed, I become like a well-watered garden, the Lord strengthens my frame, uses me, and Jesus is glorified.” 3

We can’t all move to Zimbabwe, but somewhere near you is a need you can meet, an orphan you can love, an elderly soul you can visit, a cause you can support, an empty stomach you can fill, or a disabled person you can assist.

The Lord strengthens those who strengthen others.

The Lord will guide you always; He will satisfy your needs in a sun- scorched land and will strengthen your frame. You will be like a well-watered garden, like a spring whose waters never fail. And you will be called, “The Repairer of Broken Down Lives.”

Excerpted with permission from The Strength You Need by Robert Morgan, copyright Robert J. Morgan.

Have you experienced the miracles that the Lord delivers when compassionate faith is practiced? The Lord strengthens those who strengthen others! Who can you strengthen today? Come share with us on our blog. We want to hear from you! ~ Devotionals Daily 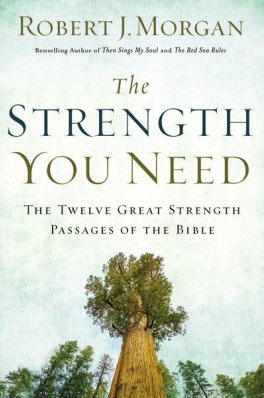