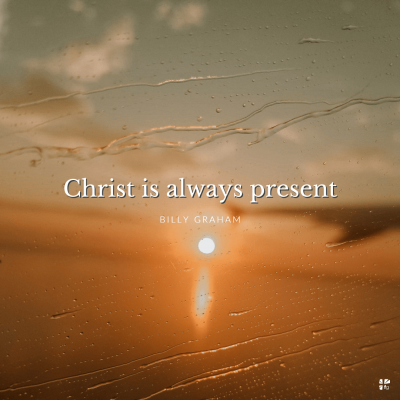 If we are followers of Jesus Christ, who are not compromising with the sinful ways of the world, we may be called upon to suffer in subtle ways which are inescapable.

Suffering, in its many-shaped definitions, is a part of life in a sinful world. Two Christians released from a country where the government was hostile toward Christianity were asked how it felt to be persecuted for their faith. They replied, “We thought it was the normal way for a Christian to be treated.”

The Christian who expects to escape life’s difficulties has an unrealistic attitude and has failed to understand the Bible or the history of the church.

We must suffer before we are rewarded. The concert pianist or master musician knows he cannot escape the hours, days, and months of grueling practice and self-sacrifice required before the one hour of perfect performance.

The student cannot escape the years of struggle and study before that great graduation day. The astronaut who hopes to participate in the space program knows it will require stern discipline to prepare for the exciting day on the launching pad.

The athlete who wants to be a member of the Olympic Team must count on years of training, discipline, and hard work. Several years ago a courageous and determined Japanese gymnast helped his team win a gold medal by performing some near-perfect gymnastic feats with a broken leg! Any star athlete will tell you that it takes pain and suffering to achieve success. But, as in the case of the Japanese gymnast, the pain and suffering are worth it!

Consider the apostle Peter tender message on the subject of suffering:

Dear friends, do not be surprised at the painful trial you are suffering, as though something strange were happening to you… If you are insulted because of the name of Christ, you are blessed, for the Spirit of glory and of God rests on you. If you suffer, it should not be as a murderer or thief or any other kind of criminal, or even as a meddler. However, if you suffer as a Christian, do not be ashamed, but praise God that you bear that name… So then, those who suffer according to God’s will should commit themselves to their faithful Creator and continue to do good. — 1 Peter 4:12, 1 Peter 4:14, 1 Peter 4:15, 1 Peter 4:16, 1 Peter 4:19

Persecution has been a part of the heritage of the Jews throughout their long history, but in the passage quoted above Peter was writing to both Jews and Gentiles to help them in their new faith in Christ and what it means to suffer as a Christian.

It is never easy to be a Christian. The Christian life can still bring its own loneliness, unpopularity, and problems. It is human nature to dislike, resent, or regard with suspicion anyone who is “different.” This is one of the great problems of the world today. Tribal differences, class differences, ethnic differences, cultural differences separate people. Such differences often lead not only to misunderstanding, but to war.

When the Christian brings the standards of Jesus Christ to bear upon life in a materialistic and secularistic world, it is often resented. Because the moral and spiritual demands of Jesus Christ are so high, they often set the Christian “apart.” This can bring about misunderstanding, fear, and resentment. When people do cross-cultural evangelism, they should learn to use methods in presenting and obeying the gospel through sensitivity without compromise in God’s truth. However, the redemptive, ethical, and moral aspects of the gospel can never be contextualized. They are the same in every culture, in every ethnic and racial grouping.

Persecution is also a test. One of the answers to the “why” of suffering is given in the Bible:

for a little while you may have had to suffer grief in all kinds of trials. These have come so that your faith — of greater worth than gold, which perishes even though refined by fire — may be proved genuine and may result in praise, glory and honor when Jesus Christ is revealed. — 1 Peter 1:6-7

The great fire of Rome began on June 16, A.D. 64. Christians were blamed and persecuted. But Peter was not necessarily writing about those Christians, but the ones who were suffering from reproach. Peter was also looking ahead and saw the intense fiery trial shortly to come upon the church. I am convinced that the current popularity of evangelical Christianity in America will be short-lived. The Bible teaches, and history confirms it, that it never hurts the church to go through the furnace. Peter indicated that persecution is not a “strange” happening as far as Christians are concerned. He tells his readers, “Don’t be surprised when it comes. Be surprised if it doesn’t come!”

In fact, everyone who wants to live a godly life in Christ Jesus will be persecuted. — 2 Timothy 3:12

Persecution for the Christian has many benefits. It gets us praying. It drives us deeper into the Scriptures. And it burns away the sins and the dross in our lives. Everybody of significance in the Bible experienced suffering.

When you are identified with the name of Christ you will go through it. The Scriptures teach over and over that we need to be tested and purified.

We can endure persecution because we know the purpose behind it which is to glorify God. Sixteen times in 1 Peter the apostle talks about the glory of God. He says in effect: I’ll tell you what you really need. Go through the furnace, and when you go through the furnace to the glory of God, the Spirit of God comes upon you, and there is a joy in your heart and you glorify God.

Through persecution we also partake of the sufferings of Jesus Christ. When a man has to suffer and sacrifice for his faith, he is walking the way Christ walked, and sharing the cross that Christ carried. The Scriptures teach that if we “share in his sufferings… we may also share in his glory” (Romans 8:17). In Philippians 3:10 Paul says,

I want to know Christ and the power of his resurrection and the fellowship of sharing in his sufferings, becoming like him in his death.

Many times Paul returns to the thought that when the Christian has to suffer he is in some strange way sharing in the very sufferings of Christ (2 Corinthians 1:5; 2 Corinthians 4:10-11; Galatians 6:17; Colossians 1:24).

However, it is also wonderful to think that in our Christian life the power of His resurrection precedes the fellowship of His sufferings. In other words, the power of His resurrection is available to us from day to day through the Holy Spirit. We enjoy the sense of God’s presence in the midst of suffering here and now. I have talked to people who are experiencing deep pain or severe difficulties, and they have said, “I feel God is so close to me.” When Stephen (Acts 7) was on trial for his life and when it was certain that he would be condemned to death, his face appeared to the onlookers as if it were the face of an angel (Acts 6:15).

When the three Hebrew children were thrown into the fiery furnace and the king looked in, he saw a fourth who was like unto the “Son of God” (Daniel 3:25, KJV).

No believer is ever left to suffer alone. Christ is always present.

There is a legend of a pioneer missionary to some distant island who led his first convert to Christ. Later the converted man was tortured to death by his fellow natives. Years later when the missionary himself had died and gone to glory, he met this martyred convert and asked him how it felt to be tortured to death for Christ. The man looked at him a moment and then replied, “You know, I don’t remember!”

To suffer as a Christian takes many different forms. Some persecutions may be of the more subtle types.

What did Jesus mean when He said, “Blessed are those who are persecuted because of righteousness, for theirs is the kingdom of heaven” (Matthew 5:10). Among other things, Jesus may have been referring to hassles that Christians endure from the world because they live differently from the world, and are persecuted in many different forms. The Bible says that Christians are distinguished as aliens in a worldly society. This causes the non-Christian to feel guilty or antagonistic, seeking ways to retaliate in some way toward those who live according to a higher standard — the standard of Christ.

How different are you? Is there anything that distinguishes you from the secularist, the agnostic, or the atheist? In His parable of the sower, Jesus describes those who fail to maintain their stand for righteousness:

Since he has no root, he lasts only a short time. When trouble or persecution comes because of the word, he quickly falls away. — Matthew 13:21, italics mine

However, Jesus makes it clear that there is a reward for faithfulness in the face of persecution or deprivation.

‘I tell you the truth,’ Jesus told Peter, ‘no one who has left home or brothers or sisters or mother or father or children or fields for me and the gospel will fail to receive a hundred times as much in this present age (homes, brothers, sisters, mothers, children and fields — and with them, persecutions) and in the age to come, eternal life.’ —Mark 10:29-30

In very plain terms Jesus reminds His disciples in John 15:20:

Remember the words I spoke to you: ‘No servant is greater than his master.’ If they persecuted me, they will persecute you also.

When we are persecuted for our faith, we are in good company!

Excerpted with permission from Who’s in Charge of a World That Suffers? by Billy Graham, copyright The Billy Graham Literary Trust.

Are you suffering right now for Jesus? If so, then you are in great company! It’s no surprise for Christians to go through terrible troubles and trials. We should expect them and prepare for them. When we do, we can know that Jesus is worth it! ~ Devotionals Daily