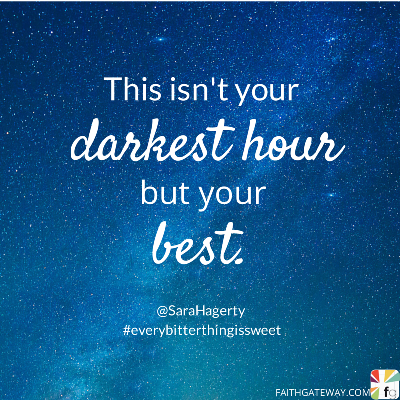 It came as a series of text messages, before texting was commonplace. I was buried deep in my Bible, and God was singling out my husband.

First, Nate alerted me that “the business financials are bad.”

At the time, our dark season of waiting for children was lingering longer than we’d anticipated. We’d had infusions of hope, but circumstances were unreliable. One day we’d see movement with our adoption that made us ready to declare a new day, and then the next day came another delay. Just as with my father’s diagnosis and death, circumstances were like sand in our hands.

The day before Nate’s text, I’d thought, Now we’ve hit bottom. It can’t get worse than this.

So when the text came, I didn’t brace myself. It can’t be that bad, I thought.

I was sitting before God. This place had become familiar. It was steady. I could shut the door to the unpredictable around me and seek out this One who, though also not predictable, was consistently available to give me a framework for all this external mess. I’d come to know Him as friend, available for me here, in times just like this.

For many years pain caused me to shut down. I had ready access to activity, and this activity became my diversion when I didn’t know what to do with an ache that surfaced in front of me. He was distant, then, and I was on the move.

But one or two instances of sitting, not running, when life hurt, introduced me to a new way. Sitting before Him when our adoption stalled and asking the questions that a little girl asks her daddy when life isn’t what she expected made it all the more easy to go there again when another month passed and my womb was empty. When my dad died, I found that place again.

I could talk to God. More than talk, even, I could expect an exchange in which I came, barren, and He responded with something so other that the instance itself was overshadowed by what He was offering me. It was as if I could feel the rise and fall of His chest simply by pausing enough to rest on it.

God was revealing this kind of availability to me in both the big aches and the everyday small ones.

The nearness of God in this new way was alluring enough that I’d made a habit of it, such that when more news came, I wanted back in that place with Him.

The second text, and then the third, revealed the details.

This was worse than we’d thought.

We met for lunch after this revelation, he stunned and I unnaturally steady. God had been reconfiguring me, early, before I had language for what would transpire here.

“We’ll dance on this,” I said. “This isn’t our darkest hour but our best.” I spoke words I’d only just begun to believe for myself and was surprised to hear myself say them. It was as if speaking them reinforced my belief in them.

Nate had wrapped his arms around me during my unraveling for years, and now it was my turn to hold him during his. It was my turn to remind him we were blessed, not cursed.

With circumstances spiraling and hearts still tangled in perplexity, we were seeing His goodness. This — all this mess — was fodder for discovering His love anew.

Every single dark day was an invitation.

Excerpted with permission from Every Bitter Thing Is Sweet: Tasting the Goodness of God in All Things by Sara Hagerty, copyright Zondervan, 2014.

Are you suffering in relationships, your marriage, business, with your children, Church family, finances, or other area of your life? Do you feel like this is your darkest hour? What do you think of Sara’s declaration “We’ll dance on this”? Are you sitting before God in quiet, especially during your most difficult times? If you know someone who is in the middle of dark days, wrap your arms around them and pray for them today! Come join the conversation on our blog! We would love to hear from you! ~ Devotionals Daily 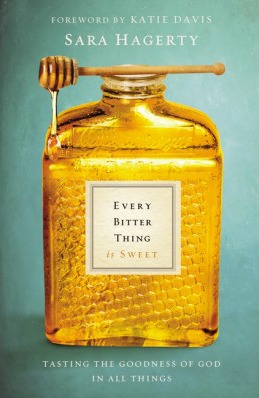