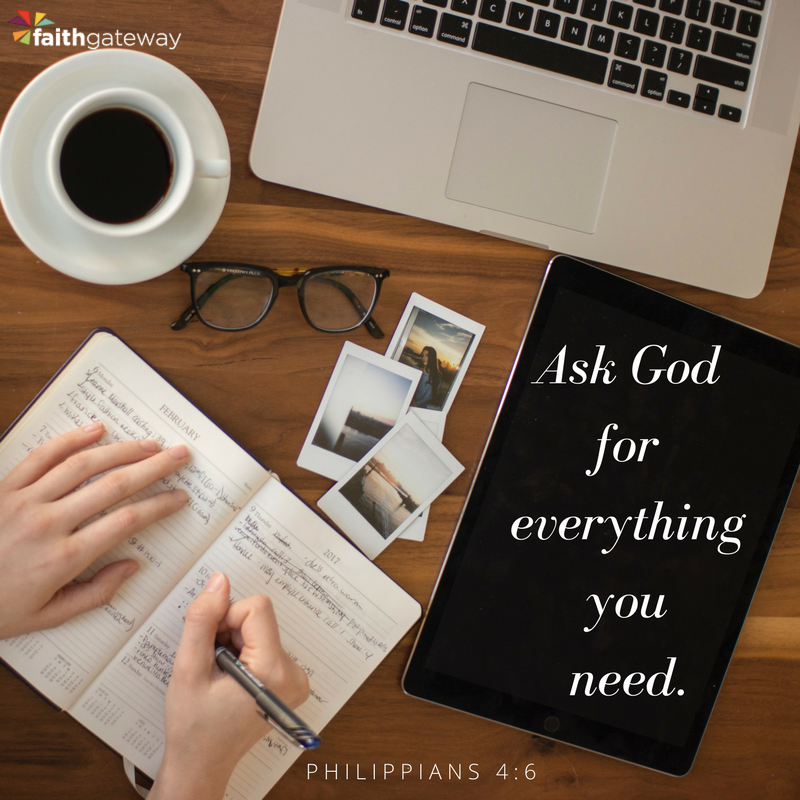 To keep me from becoming conceited because of these surpassingly great revelations, there was given me a thorn in my flesh, a messenger of Satan, to torment me. Three times I pleaded with the Lord to take it away from me. But He said to me, “My grace is sufficient for you, My power is made perfect in weakness.” — 2 Corinthians 12:7-9 NIV

Here is the scene: You and I and a half-dozen other folks are flying across the country in a chartered plane. All of a sudden the engine bursts into flames, and the pilot rushes out of the cockpit.

Good thing he knows where the parachutes are because we don’t. He passes them out, gives us a few pointers, and we stand in line as he throws open the door.

The first passenger steps up to the door and shouts over the wind, “Could I make a request?”

“Sure, what is it?” “Any way I could get a pink parachute?” The pilot shakes his head in disbelief. “Isn’t it enough that I gave you a parachute at all?” And so the first passenger jumps.

The second steps to the door. “I’m wondering if there is any way you could ensure that I won’t get nauseated during the fall?”

“No, but I can ensure that you will have a parachute for the fall.”

Each of us comes with a request and receives a parachute.

“Please, Captain,” says one, “I am afraid of heights. Would you remove my fear?” “No,” he replies, “but I’ll give you a parachute.”

Another pleads for a different strategy, “Couldn’t you change the plans? Let’s crash with the plane. We might survive.” The pilot smiles and says, “You don’t know what you are asking,” and gently shoves the fellow out the door. One passenger wants some goggles, another wants boots, another wants to wait until the plane is closer to the ground.

“You people don’t understand,” the pilot shouts as he “helps” us, one by one. “I’ve given you a parachute; that is enough.”

Only one item is necessary for the jump, and he provides it. He places the strategic tool in our hands. The gift is adequate. But are we content? No. We are restless, anxious, even demanding.

Too crazy to be possible? Maybe in a plane with pilots and parachutes, but on earth with people and grace? God hears thousands of appeals per second. Some are legitimate. We, too, ask God to remove the fear or change the plans. He usually answers with a gentle shove that leaves us airborne and suspended by His grace.

The Problem: When God Says No

ask God for everything you need. — Philippians 4:6

All you want is an open door or an extra day or an answered prayer, for which you will be thankful.

No answer. You pray and wait.

May I ask a very important question? What if God says no? What if the request is delayed or even denied? When God says no to you, how will you respond? If God says, “I’ve given you My grace, and that is enough,” will you be content?

Content. That’s the word. A state of heart in which you would be at peace if God gave you nothing more than He already has. Test yourself with this question:

What if God’s only gift to you were His grace to save you. Would you be content?

You beg Him to save the life of your child. You plead with Him to keep your business afloat. You implore Him to remove the cancer from your body. What if His answer is, “My grace is enough.” Would you be content?

You see, from Heaven’s perspective, grace is enough. If God did nothing more than save us from hell, could anyone complain? If God saved our souls and then left us to spend our lives leprosy-struck on a deserted island, would He be unjust? Having been given eternal life, dare we grumble at an aching body? Having been given Heavenly riches, dare we bemoan earthly poverty?

Let me be quick to add, God has not left you with “just salvation.” If you have eyes to read these words, hands to hold this book, the means to own this volume, He has already given you grace upon grace. The vast majority of us have been saved and then blessed even more!

But there are those times when God, having given us His grace, hears our appeals and says, “My grace is sufficient for you.” Is He being unfair? In God Came Near I’ve told how our oldest daughter fell into a swimming pool when she was two years old. A friend saw her and pulled her to safety.1 What I didn’t tell was what happened the next morning in my prayer time. I made a special effort to record my gratitude in my journal. I told God how wonderful He was for saving her. As clearly as if God himself were speaking, this question came to mind: Would I be less wonderful had I let her drown? Would I be any less a good God for calling her home? Would I still be receiving your praise this morning had I not saved her?

Is God still a good God when He says no?

That’s quite a question, isn’t it? It’s a lot to chew on today. Is God still a good God when He says no? How has that question played out in your own life? How have you answered it? Come share with us on our blog. We want to hear from you!