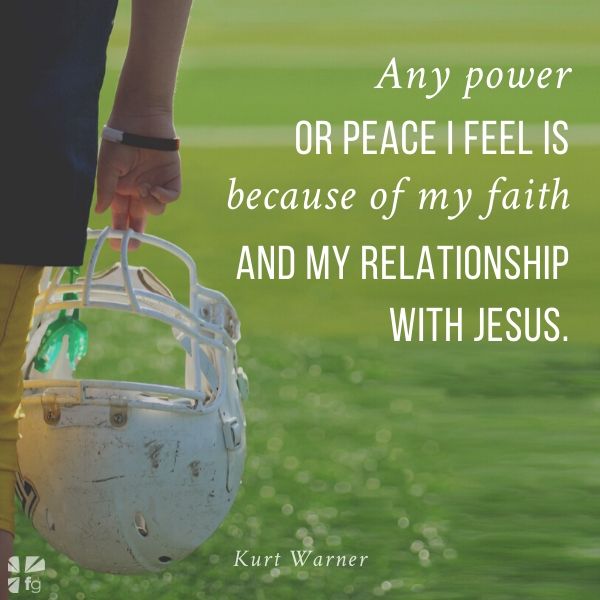 Editor’s Note: In 1999, Kurt Warner had gone from being a nobody stocking groceries to the MVP of the NFL, leading his team to a Super Bowl victory. His book All Things Possible recounts his refusal to relinquish his dream or his belief in God’s guiding hand throughout his improbable Hall of Fame career journey… and during even greater adversities faced by his family. Enjoy today’s excerpt.

Just before I threw the biggest pass of my life, the sideline bomb that won the Super Bowl and completed one of the wildest slingshot rides you’ll ever see in sports or anywhere else, I closed my eyes, savored the moment, and felt nothing but sincere, honest-to-goodness joy.

It was a strange feeling to experience at the time, because my St. Louis Rams teammates and coaches were nervously pacing the sidelines, and there wasn’t a whole lot of exhaling going on around me. By all rights, I should’ve been a stressed-out mess. The dream I’ve had since I first got out of diapers was slipping away like a football caked in Vaseline, but for some crazy reason, I couldn’t stop smiling.

I had helped give my team a 16-0 advantage in Super Bowl XXXIV, but now the Tennessee Titans had made up the deficit, and 72,625 fans at the Georgia Dome — and about 800 milllion watching TV across the world — were wondering whether we’d fold. The Titans had a bounce in their step, and for good reason: they had stopped our offense cold on the previous two drives, and for the third consecutive possession their offense had ripped through our extremely tired defense. As my teammates and I watched Al Del Greco’s forty-three-yard field goal sail through the uprights to tie the game at 16-16 with two minutes and twelve seconds remaining, the oxygen on our sidelines grew dense, and the mood grew extremely tense.

One mistake, and our incredible, worst-to-first season would be obliterated. It was a daunting situation, but I wasn’t worried about the possibility of pulling the biggest choke job in Super Bowl history. For one thing, I’d been confronted with far more intimidating circumstances in the past. When you’ve helped your soul mate throw her parents’ ashes to the wind after they were killed in a freak tornado, when you’ve walked alone through the snow, digging your freezing hands into your pants pockets and trying to dredge up quarters for gas money while the woman and young children you love sit stranded and shivering alongside a freeway on-ramp, losing a football game — even that football game — doesn’t qualify as a disaster.

By the time that chilling conclusion was playing out, most people watching knew that five years earlier I’d stocked shelves at the Hy-Vee Supermarket in Cedar Falls, Iowa. But those long nights on the graveyard shift were hardly the lowest moments of my life; at least then I didn’t have to worry where the next meal would come from, because I knew whatever goodies my co-workers and I dropped and damaged would go straight into our stomachs. Back then, I was struggling not only to resuscitate my football career but also to help provide for a young woman, Brenda Meoni, and her two young children, one of whom was mentally disabled. Brenda, who was my girlfriend at the time, did her shopping at the Hy-Vee — and paid for her groceries with food stamps.

One snowy Sunday afternoon, when the four of us were holing up in the cold, dank basement of her parents’ apartment, we decided to get into my GMC Jimmy and go for a ride. The Jimmy, purchased with the signing bonus I’d received from the Green Bay Packers a few months earlier, was the one luxury item I owned, and taking a drive seemed like the cheapest form of entertainment.

A few miles into our outing, two problems developed. The gas gauge hit empty, and we had no money to fill up the tank. It was one of those times late in the month when we were trying to stretch the pennies while waiting for a paycheck to come in, and now we were out in the cold. We figured we had enough gas to make it home, so we headed back toward Highway 218 and pulled on the on-ramp. The car coughed, wheezed, and made that horrible noise, then chugged to an inglorious halt on the shoulder. The kids were in the backseat, shivering and crying. It was car-cleaning time.

We scrounged around the vehicle, searching the floors and digging through the glove compartment, and scraped together as much change as we could — about a dollar ninety-five. I grabbed a gas can and hiked back toward the nearest filling station while Brenda and the kids froze their tushes off in the car. Fortunately, we were only a few blocks from a gas station, and I was able to buy enough fuel to get us home. But I’ll never forget that walk, because I didn’t have any gloves with me, so here I was, getting snowed on, shivering, with numb hands, rushing back while worrying that the kids were going to catch pneumonia.

Thankfully, we escaped from that predicament — and so many other trying times — with an even stronger sense of what our faith, priorities, and motivation should be. It’s all about perspective, and when you’ve walked a few miles in my cleats, blowing a sixteen-point lead in the Super Bowl is nothing to get freaked out about. Besides, it wasn’t as though I was a helpless bystander. The ball would be in my hands, and ever since I became the reluctant quarterback of my freshman team at Regis High School in Cedar Rapids, Iowa, that has usually been a good thing.

Five months earlier, the few sports fans who even knew who I was regarded me as a marginal journeyman who was lucky to be in the NFL. Then our starter, Trent Green, went down with a knee injury in the preseason, and I stepped in and became the league’s Most Valuable Player. I had thrown forty-one touchdown passes in the regular season, the third-highest total in history, and seven more in the playoffs.

One more, I told myself, and the dream will be complete.

This was all I’d ever wanted — a chance to prove myself under fire — and I wasn’t going to let nerves get in the way of glory. I started grinning like a guy who figures out the ending to a thriller before anyone else in the movie theater.

Here it is, I thought. Here’s your dream, the way you’ve always imagined it, the ball in your hands and the chance to lead the winning drive in the biggest game of all. Then I had a vivid flashback. Suddenly it was 1989, and I was back in the family room of the small house in Cedar Rapids that I shared with my mother and older brother. We were watching Joe Montana, maybe the greatest quarterback ever to live, work his two-minute magic in Super Bowl XXIII in Miami. I remembered him hustling onto the field with time running out and his San Francisco 49ers trailing the Cincinnati Bengals by three points. Montana was so cool on that drive, he paused in the huddle to point out John Candy, an oversized actor who was sitting in the front row. Then Montana pulled off one of the sweetest endings in history, giving the Niners the victory on a perfect slant to John Taylor in the back of the end zone with thirty-four seconds remaining.

Now it was time for me to pull a Montana and produce a fantastic finish. Cool, I thought, but let’s get on with the show. After a career of patiently waiting my turn, it was time for some instant gratification.

As I surveyed the stands, John Candy, God rest his soul, was nowhere to be found. No problem. I spotted a small woman with spiked hair and a metallic blue shag blouse and felt warm and fuzzy inside. Over in the corner of the far end zone the former Brenda Meoni, now my wife, was on the edge of her front-row seat. I thought about all we had been through together — the joy we’d shared with our three children, the time I’d foolishly broken up with her to search for something better, the way God had used her to strengthen my faith. Looking at the love of my life, not to mention one of the strongest people I know, I felt a surge of power rush through my veins. For a split second, football was the furthest thing from my mind.

Brenda was there for me when I excitedly joined the Packers in 1994 and got fourteen measly plays to prove myself in five weeks of training camp. She was supportive after I got cut and went back to Cedar Falls to work out with my old University of Northern Iowa teammates by day and stock shelves at the Hy-Vee by night. Back then, when I talked about making it to the NFL, she was probably the only person on earth who didn’t think sleep deprivation had sapped me of my sanity. Now, more than anyone, she understood the sacrifices I’d made and the inner fire I’d displayed to get to the brink of an NFL championship. As remarkable as people think my story is, Brenda’s story, in my eyes, is far more compelling and incredible. Winning this game would be a triumph for both of us, and I relished the opportunity to do it.

Then I began to pray — for focus, for strength, for protection. I’m a man who is driven by faith, and any power or peace I feel, on the football field or otherwise, is because of my faith and my relationship with Jesus. A lot of people are turned off when athletes talk like this, so let me come right out and clarify my position: I’m not trying to preach or be overly judgmental, and I’m not in any way claiming that God is some sort of football grand pooh-bah who hands out touchdowns and sacks to the faithful like winning lottery tickets. I’m just trying to give people a sense of what works for me and how it has helped me achieve success in sports and in much more important endeavors. To put it simply, any sharpness, clarity, and grace under fire I’m able to summon are a result of faith and God’s presence in my life.

All season long, I had sensed that my efforts were part of God’s plan — that He wanted to use me to give Him glory and spread His gospel to others. That doesn’t mean that God would call plays, go through progressions, and throw passes for me, just that He would help give me the confidence and focus to tap my potential and go after my dreams. Week after week, situation after situation, I’d tell myself, God is faithful; He finished what He starts.

As I stood on the sidelines, waiting for the final act of sensational drama, I looked up to the sky — well, okay, the top of the dome — and said it again: He’s gonna finish what He started. He has finished it in every other way, and now this is my moment. It’s time for me to win this game.

Excerpted with permission from All Things Possible by Kurt Warner, copyright Kurt Warner.

“But seek first His kingdom and His righteousness, and all these things will be given to you as well.” — Matthew 6:33

In what area of your life do you need to be reminded of God’s faithfulness? How does Kurt’s story remind you that He is with you even in adversity?