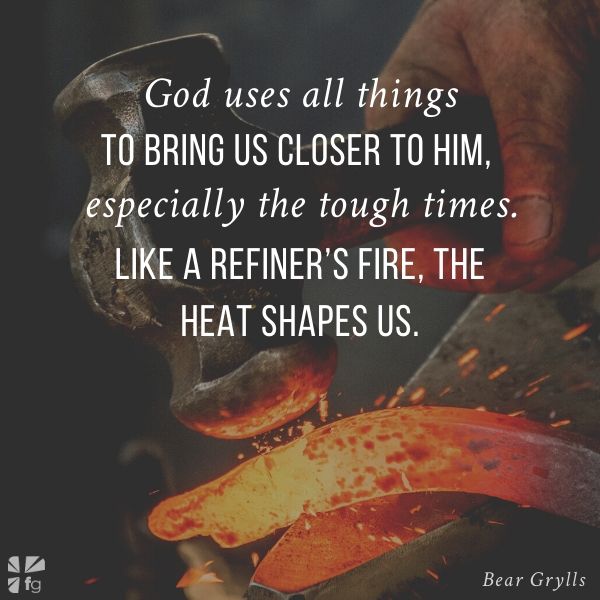 Editor’s note: Bear Grylls is a survivor. You’ve likely seen him on one of his many survival and adventure TV shows, such as Man Vs. Wild, You Vs. Wild, The Island, and Running Wild with Bear Grylls. In his life, Bear has served with British special forces, climbed Everest, crossed the north Atlantic unassisted, and he currently holds the record for the longest indoor freefall! But as much as Bear knows about adventure and survival, he’s come to realize that a deeper source of strength is needed in this life. As Bear says, “I find the journey hard. I often mess up. I feel myself teetering on the edge more often than you would imagine. So for me, starting my day with God really helps. It is like food. Like good fuel for the soul.” In his  book Soul Fuel, Bear Grylls offers up 365 devotions, many of which he wrote on his phone during his countless adventures. Enjoy today’s selection from Bear in Soul Fuel.

The storm was a monster. It was nighttime, and we were four hundred miles off the coast of Greenland, facing subzero, gale-force 8 winds, and waves as big as houses. Five of us were attempting to cross the frozen North Atlantic in a small, open rigid inflatable boat, and we were struggling.

It felt as if it was only a matter of time before one of the walls of roaring white water that were repeatedly smashing over us would soon capsize our little boat, and that would surely spell death so far from rescue in those arctic waters.

All five of us were truly terrified. I will never forget that sickening feeling when you know you have truly screwed it up—and you are going to die. Anticipating a horrible death was a genuine reaction to our situation.

We had been sticking to our order of rotation, taking turns at the wheel, desperately trying to outlast the storm and endure the night. But we were exhausted, tight on fuel, and hundreds of miles from any civilization.

I knew that the times when we changed over the helm were always our most vulnerable moments. It was those dangerous few minutes as the new helmsman started a fresh battle to feel the rhythm of these huge waves in the pitch dark. One slow reaction and we would be over.

Twice we came so close to capsizing at this critical handover point, and instinct told me we might not get so lucky a third time. I made the decision to carry on and helm the boat myself, in a desperate attempt to see the storm through. It was hard to explain, but I just knew that this voice was telling me to keep steering.

Fear can totally break people, but it doesn’t have to be the final answer. Courage steels people, but we have to find it from somewhere. Courage isn’t the absence of fear. On the contrary, without fear we cannot truly be courageous. To be brave we must first be afraid.

I remember so vividly asking Jesus to be beside me in that storm, to steel me, to sustain, strengthen, and deliver me. And He was there, so much so that one of our crew, Nigel Thompson, who had never known faith in his life before, swore that he saw an angel calmly sitting on the front of our small boat throughout that storm.

Still the winds and waves roared—if anything, they got worse. It was one of the longest, most high-risk nights of my life, but never once did I feel alone. Christ promises never to abandon us. And as dawn broke and the storm subsided, we finally saw the coast of Iceland in the distance. We had been steeled and delivered.

In the moments when we need it most, if we ask, God will supply us with the courage we need. Fear and anxiety might shout louder. But isn’t it just like God to answer in the still, small voice of calm? When we ask, Christ will always be beside us, with His angels if necessary. I don’t know all the ins and outs of theology, but I know the presence and the courage that God has provided in the tightest of moments.

And that is enough for me.

Henry Ford was right: “When everything seems to be going against you, remember that the airplane takes off against the wind, not with it!”1

Struggles are a part of life, and we all need renewed courage from time to time. So it’s comforting to read words like these from someone as great as King David: “I am in trouble,” he wrote. “My eye is clouded and weakened by grief, my soul and my body also” (Psalm 31:9 AMP). Nobody can go through life without moments like these. But if we read on we see another essential truth: in the tough times we find out the most about where our trust lies.

The pages of your Bible are full of stories of great women and men who faced battles and learned the hard way (is there any other?) that God was on their side. I’ve lost count of the number of times I’ve been terrified or brought low — so many of those moments when I mutter in desperation, “Help get me through this one, somehow.” But in the storms, let’s remind ourselves yet again of Paul’s encouragement to us:

We know that in all things God works for the good of those who love Him, who have been called according to His purpose. — Romans 8:28

God uses all things to bring us closer to Him, especially the tough times. Like a refiner’s fire, the heat shapes us. If we want to develop courage, we’re going to have to face some tough times. Courage means not running from the battle or hiding from the struggles. It means facing them with Christ beside us. It means trusting that what shakes us today will shape us tomorrow and that every storm is a school. Every trial is a test. Every experience is an education. Every difficulty is for our development.

Blessed is the one who perseveres under trial because, having stood the test, that person will receive the crown of life that the Lord has promised to those who love him. — James 1:12

Where in your life do you need courage today? Where do you need to trust the One who calms the storms? We’d love to hear your thoughts in the comments!