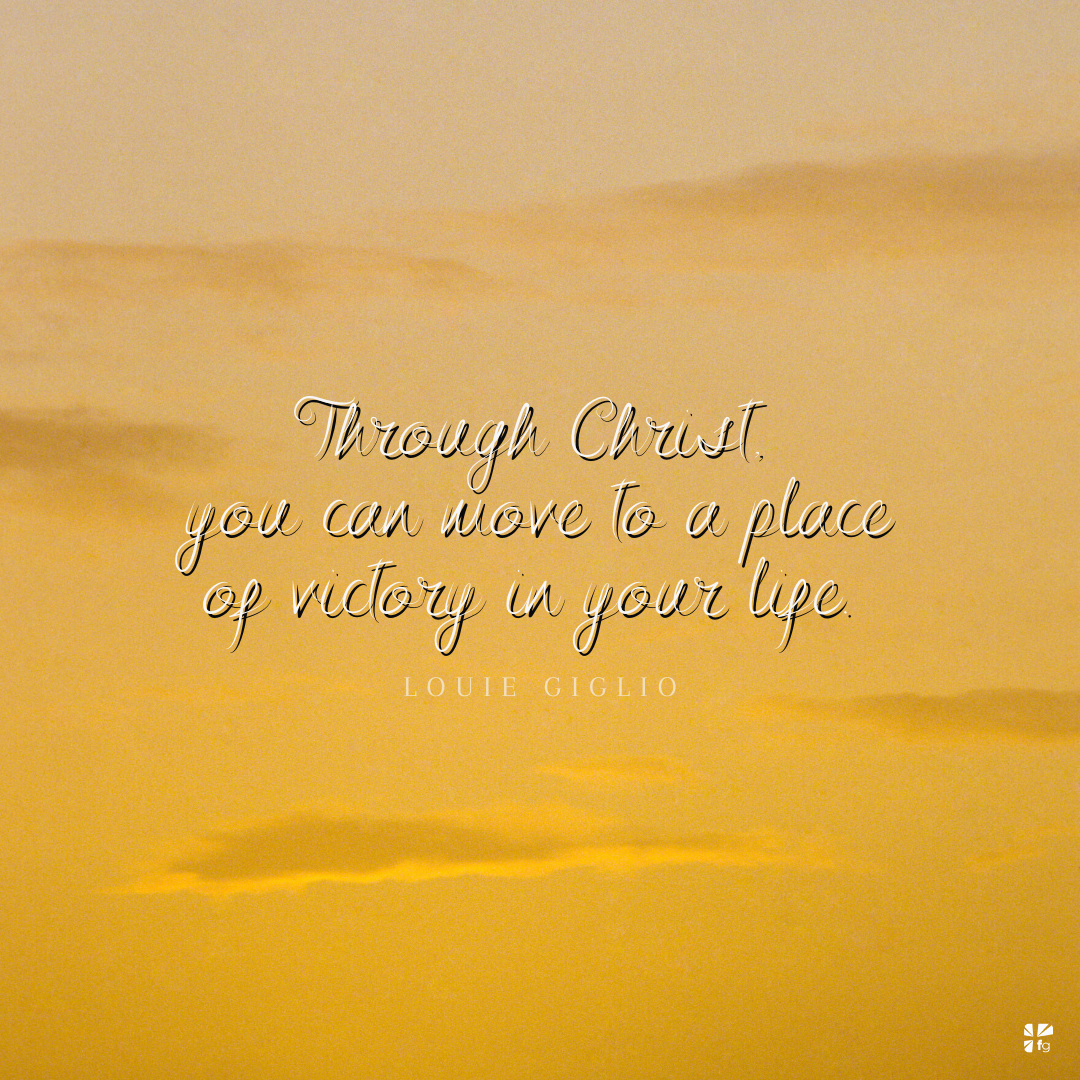 I’m a college dropout. Not because I’m not smart enough. But because when I was eighteen years old I was losing the battle of my mind. The Enemy had gained a foothold in my life, and that foothold was called laziness. I could sleep through morning classes like a champ. If there had been an Olympic competition in skipping class and making excuses, I’d have gold medals hanging on the wall. Eventually, the letter arrived from the dean of my program requesting that I kindly take some time off from pursuing my university education.

No worries, I thought. I’ll enroll at the junior college in town.

Not long after, I received a similar notice from them. I had succeeded in failing out of two schools in the same year.

Talk about the Enemy sitting at your table and eating your lunch!

All the while, I still had huge dreams. Through a powerful experience of being called to ministry, I knew God had big plans for my life. I could clearly see my future. But I had lost sight of what it was going to take to get there. I was pumped about eventually going to graduate school for further ministry training. I had just lost interest in the undergraduate grind necessary to get there.

Once the light bulb came on and I connected the two steps, I literally took the next exit on the freeway and within an hour was sitting in that same dean’s office, begging him to let me back into Georgia State. He was gracious, and I was awakened to my future plans and what it was going to take to get there. My identity wasn’t being a college strikeout. I was called by God to preach His Word. I had the capacity to sleep through class, for sure. But, as I demonstrated, I also had the ability to crush two years’ worth of classes (crush in the very best way) in a little over a year. I graduated with my original freshman class and enrolled in grad school on schedule.

I won the battle of my mind. I woke up every day convinced God was going to accomplish through me all He had called me to do. I believed I could be who He created me to be.

Can you see where you want to be?

Perhaps the Enemy has convinced you that you can’t move from where you are to where you want to be. You’ve listened to the voices of fear. You’ve been caught in the spiral of sin and temptation. You’ve convinced yourself you have no value. Your mind is clouded by worry and uncertainty. The Enemy has accomplished this by sitting down at your table, but you don’t need to let him stay there and get comfortable. You do not have to entertain the Enemy’s voice.

Through Christ, you can move to a place of victory in your life.

This happens when you learn to win the battle for your mind. The Enemy knows this. One of his main ploys is to go after your thought life. He’s patient too. In the garden of Eden, the serpent didn’t shout his temptations to Eve over a loudspeaker. He planted seeds in her mind and waited. He prompted her to question God’s goodness. He coaxed her to wonder if God was withholding something good from her. Eventually Eve relented and let those seeds take root. Eve acted out what she had been thinking about.

That’s how the Enemy works. If he can win the battle for your mind, then he can win the battle for your life. In Numbers 13, when Moses dispatched the twelve spies to explore the land of Canaan in preparation for Hebrew conquest, ten spies returned with a fearful, faithless report. “We can’t attack those people,” the ten spies said, shaking in their boots. “They are stronger than we are…. We seemed like grasshoppers in our own eyes, and we looked the same to them” (Numbers 13:31, Numbers 13:33).

Hang on. How did the ten spies know what they looked like in the Canaanites’ eyes? Did the spies ask their enemies, “Hey, what do you think of us? How small and puny do we look to you?” No, a seed had been planted in the spies’ minds. They tended that seed and let it grow and acted on it, and as a result, they wandered in the desert for the next forty years. They never tasted the promises of God for their lives.

It didn’t have to be that way, in the wilderness never tasting God’s promises — not for them, and not for you and me today.

Victory can be yours. Right here. Right now. Victory is about examining the seeds that have been scattered in your mind and not letting them take root. It’s about pulling up and throwing away the thoughts that do not coincide with the heart of God. It’s about changing the way you think. And one prayer helps in particular.

READINESS FOR THE POWER PRAYER

Maybe one of the seeds planted in your mind is doubt. You don’t know if any of this teaching is going to work for you. You’ve tried other ways to change before, and none of them worked, so why should this? Or maybe some change will come, but it won’t last because it’s never lasted before.

Already the Enemy has influenced your mind. Seeds can be scattered in your mind anytime, anywhere, and particularly when you read a book such as this. Before the truth can set you free, you need to see the lies that are holding you hostage. Ask the Holy Spirit to reveal to you which lies you’re believing. Ask Him to be specific. Are you having any of the following thoughts?

None of those thoughts came from God! Jesus Christ, the Good Shepherd of John 10 and Psalm 23, did not tell you that you’re a failure. He doesn’t prompt you to worry. He doesn’t provoke you to fear. He provides clarity, not chaos. He doesn’t stick your nose in the vomit of sin. He provides green pastures, not dry wastelands. If any of these things are in your life — fear, worry, temptation, feelings of worthlessness, feelings of confusion — guess what? The Enemy has shown up and dropped a seed in your thinking. He knows that if he can lodge a deceptive thought in your mind that goes unchecked, it will eventually take root and settle into your heart. If you harbor a deceptive thought and let it take up residence within you, in time, you will act on that thought.

Maybe you’re saying, What’s the big deal? It’s just a thought. Nobody sees it except me. It’s harmless. No. All the thoughts we entertain in our minds eventually get played out. Either our attitudes will reflect those deceptive thoughts or our behaviors will.

One way or another, those thoughts will harm us.

That’s why it’s so important for you to step into your new identity in Christ immediately. Jesus is already in the story of victory, and He has invited you into this story with Him. The way you step into that story is by reminding yourself of these truths:

Stepping into these truths changes your mind. All twelve of the spies knew that the promised land was good. They all viewed the abundant milk and honey. They all saw a single grape cluster so big it took two men to carry it on a pole (Numbers 13:23). But ten of those spies didn’t believe they could get to the promised land.

How about you? Do you believe you can live in victory? If the answer is no, the deceiver is winning the battle for your mind. He’s real, and he has a real plan. He’s circling your table, ready to sit. So keep this in mind: the stakes are high. This is your life we’re talking about. This is your now. This is your future. This is your family. This is your sanity. Your peace. Your success. Your calling. Your destiny. This is everything God has made you to be. The Devil wants to destroy you. He has no mercy, and he has all the time in the world.

Fortunately, any seeds the Enemy scatters in your mind don’t need to remain for more than a millisecond. Seeds do not need to take root. Any new seeds can be immediately removed. Even seeds that have been there for years can be removed. And it’s not about you using your superpowers. I want to drive this point home. Victory is not about something you do. That’s not the message here. The message is the gospel of Jesus Christ. It’s about what Jesus does for you.

Jesus won the total victory Himself. God makes the way.

Excerpted with permission from Don’t Give the Enemy a Seat at Your Table by Louie Giglio, copyright Louie Giglio.

The enemy doesn’t have the power to think your thoughts for you; he only has the power to toss seeds at you. What are you going to do with them? What you think is important! Victory can be yours in Christ Jesus! ~ Devotionals Daily