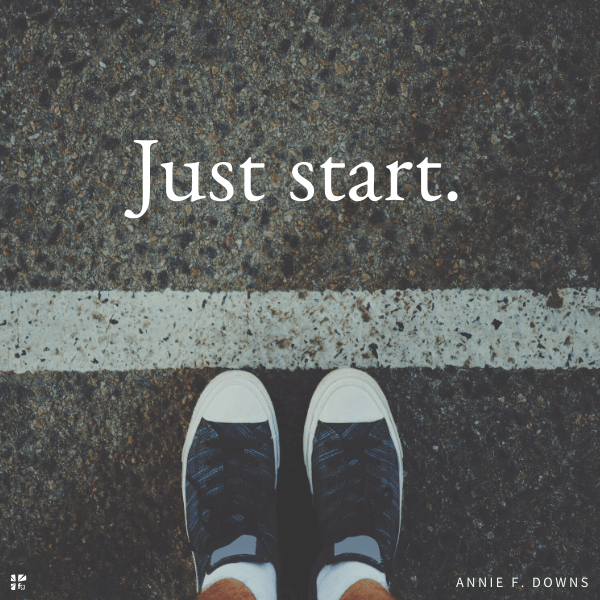 I didn’t plan to write books. Today’s call to courage? I need to be willing to write about some things I don’t want to share but feel nudged by God to do so. But in 2006, when this whole journey began for me, it looked like eight pages.

I had to start somewhere.

The day I finished Beth Moore’s Believing God study, I sat down at my computer and pounded out an eight-page document of my life as a storyteller — from a childhood full of exaggeration to an adult life of wanting to be full of truth but telling the BEST stories. I wrote about how God was revealing to me, through Mrs. Beth’s teaching, that this was the direction my life was about to go.

God’s brave moment for me that day in February 2006 was to write out what I was feeling with regard to sharing stories. He knows me. He knows you. He knows we need dreams in pieces because we would be too scared of the whole puzzle. Had I known I’d be an author and a speaker back then, I probably would have crawled under my covers and stayed there for a year or five. I’m here today because of the little starts and the brave moments dotted throughout my writing career that have grown into this.

I think of King David, way back when he’s a kid checking on his brothers in the battle against the Philistines. When he gets there, everyone is scared to death of Goliath, this beast of a man who is fighting for the other army.

Young David the shepherd tells King Saul he’ll go against Goliath. Everyone is stunned because David is a kid and the rest of the Israelite army, full of adult dudes, is afraid of him. David’s response shows us the importance of the daily steps of courage that lead to the bigger story.

But David said to Saul, “Your servant has been keeping his father’s sheep. When a lion or a bear came and carried off a sheep from the flock, I went after it, struck it and rescued the sheep from its mouth. When it turned on me, I seized it by its hair, struck it and killed it. Your servant has killed both the lion and the bear; this uncircumcised Philistine will be like one of them, because he has defied the armies of the living God. The LORD who rescued me from the paw of the lion and the paw of the bear will rescue me from the hand of this Philistine.” Saul said to David, “Go, and the LORD be with you.”
— 1 Samuel 17:34-37

And go he did! You can read what happened in this epic battle between David and Goliath in the rest of 1 Samuel 17. It’s worth a read, even if you’ve known the story your whole life.

David, as a shepherd boy, fought a lion. And a bear. And rescued his sheep. He never killed the lion in preparation for the bear. He didn’t kill the bear in preparation for Goliath. He just chose to be brave at every turn — to do his job and protect the sheep. And as the challenges grew in scope, so did David’s belief in the ways God had uniquely created him, and more importantly, David believed wholly in who God is and in the reality that David had a role to play on this planet that would require courage. Just like me. Just like you.

In 2006, I wasn’t dreaming of writing books. I could barely imagine writing out the story of how I wanted to tell stories! Then I started a blog that took courage every day to write. Then I wrote a Bible study for a group of high school girls who came over to my house on Monday nights. Then those printed-out lessons became Perfectly Unique, a book read by thousands of girls around the world. And then came my next book, Speak Love. And now we are here. You and I. And we are fighting against the fear.

David wasn’t done after Goliath. I am not done being brave either. Neither are you, I hope.

My prayer for you today is that you will open the eyes of your heart to the map and the next brave thing and the step you need to start. Tell someone your dream. Maybe even write that first step. Make that first move to research or learn or pray about the thing that is like a God-struck match lit on your insides.

Maybe for you, it’s writing a note. Singing a song. Making a phone call. Having a conversation. Composing a story. Writing a check. Booking that trip. Sending an email. Going on a date. Reading a book. Signing up.

I’m trying to list as many options as possible, but you know the thing God is doing in your life better than I do. It’s time to get quiet before the Lord and ask Him what it looks like for you to live a life of courage today. To start.

Adapted from Let’s All Be Brave: Living Life with Everything You Have by Annie F. Downs.

Open the eyes of your heart. What is the Lord saying to you? What is He calling your into that you never dreamed of before? Just start. Take the first step! Come share your thoughts with us! We want to hear what’s next for you! ~ Devotionals Daily