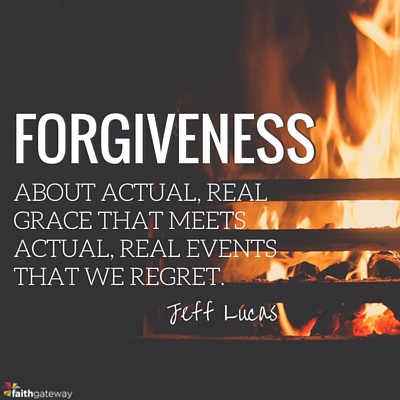 When they landed, they saw a fire of burning coals there with fish on it, and some bread. Jesus said to them, “Bring some of the fish you have just caught.” So Simon Peter climbed back into the boat and dragged the net ashore. — John 21:9–11

A beach fire is a welcome sight. The warmth of it beckoned the weary but exhilarated disciples, the smell of the broiled fish wafting across the beach. As they landed their boat at last, they realized that Jesus had been busy while waiting for them: breakfast was almost ready. Food always tastes better when shared in the open air, and it was just what they needed for their growling stomachs.

But look again at that fire. Peter certainly did.

Just days earlier Peter had denied that he even knew Jesus. Having vehemently disassociated himself from his friend and rabbi, weighting his words with curses, perhaps he was shocked at himself, stunned because he had crumbled so quickly.

He hadn’t endured a terrible beating, the Roman verberatio, a horrifying ordeal where the prisoner was scourged with whips made with small pieces of metal or bone, which would literally rip the person apart, often causing death. It didn’t take that to melt Peter’s resolve.

Maybe his fear and his instinct for survival, stirred by the awful sounds he would have heard from within the high priest’s house, overrode his loyalty. Peter would have overheard the terrible sound of knuckles pummeling soft, yielding flesh; the mocking jeers: “Prophesy! Who hit you?”; the solid slaps and the gravelly sound of their throats as they hacked up and festooned him with spit. Peter had tried to be so brave back in Gethsemane, drawing a sword. This was the work of an impetuous but brave heart; he famously denied, but let’s never forget that he was the only disciple brave enough to follow the contingent to outside the high priest’s home, a dangerous undertaking.

He was trying to get close to Jesus in his time of need — to demonstrate that he was in fact loyal to him. But the adrenaline-powered courage that made him a warrior in that moment had deserted him.

Now, warming his hands by a brazier in the courtyard, the flames lit up his face. His heart raced as he noticed that a servant girl standing there was staring at him, realization dawning on her face. She points an accusatory finger and blurts out words that fill him with terror as she makes her indictment:

“This man was with him.”

He’s quick to try to shut her down, silence her speculations.

He rubbed his hands again against the cold and stared woodenly ahead, hoping that they wouldn’t see the fear in his eyes.

But suspicion had been aroused. Others chimed in.

First they muttered behind cupped hands, glancing his way; then some of the high priest’s officials and servants asked him outright. This time he was more emphatic, faking indignation, his voice loud with feigned outrage. Finally a relative of the man who’d had his ear sliced off by Peter in the garden pressed him. In his account of Peter’s worst hour, John is at pains to let us know a vital detail: his betrayal took place at a fireside. Following the first denial: “It was cold, and the servants and officials stood around a fire they had made to keep warm. Peter also was standing with them, warming himself.”

And then John points out the second time that Peter insisted that Jesus was no friend of his: “Meanwhile, Simon Peter was still standing there warming himself. So they asked him, ‘You aren’t one of his disciples too, are you?’ He denied it, saying, ‘I am not.’ ”

And now, days later, Peter runs up onto the beach — and there’s another fire.

Peter looks down with amazement, not at his own hands as he had warmed himself that terrible night, but at the hands of a man who is busily preparing breakfast. These hands are like no other.

Hands like these usually belonged to the dead. Bloodied, bruised. They had holes in them.

Is Jesus taunting Peter, dragging him over the coals, so to speak?

I don’t believe so, although Peter might well have been shocked to see that fire. The fire was a reminder of Peter’s failure, but surely it was built to bring healing, not torment, because God’s grace and forgiveness faces the facts.

God’s forgiveness is not about airbrushing out the negative episodes in our histories; rather, it is about actual, real grace that meets actual, real events that we regret.

The gathered coals of the fire silently said this, loud and clear: the denials happened.

In forgiving us, God makes no attempt to minimize, excuse, or overlook our sins.

Peter’s failure was not brushed aside or deemed unimportant. But the fire shows us that in forgiving, Jesus looks squarely at our sin, names it for what it is, and then forgives. His view of our sin is not blinkered or blurred. Just as the crucified Christ looked at his tormenters and cried out to his Father for their forgiveness, so Jesus looks at the ugliness of our darkest sins and then chooses to pardon us, not with a grace that is forgetful, because our sin slips his mind, but rather because he chooses to remember our sins no more. The fire testifies that our sin is real — but the Jesus who sits at the fireside is just as real, and his verdict is trustworthy.

Excerpted from Faith in the Fog: Believing in What You Cannot See by Jeff Lucas, copyright Zondervan, 2014.

Can you imagine sitting by the fire that morning on the beach with Jesus being deeply burdened with your sins and failures? And yet seeing Jesus’ peaceful, forgiving face staring back at you? Can you imagine yourself with Him today as He knows the real you, all your worst, and yet chooses to remember your sins no more? Come join the conversation on our blog! We would love to hear from you! ~ Devotionals Daily