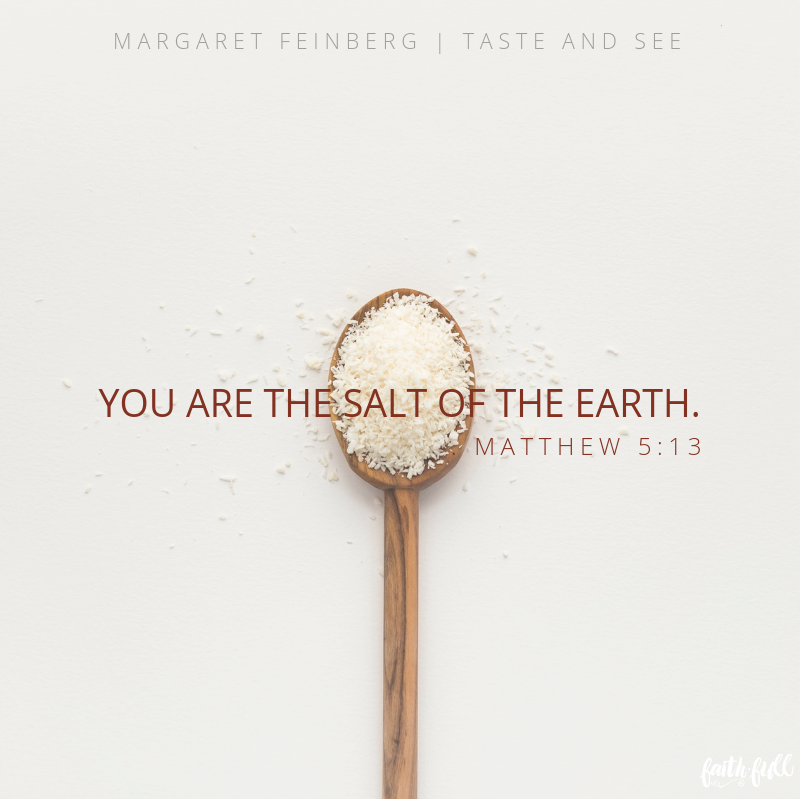 Much like the natural wonderment of the mine, salt glistens throughout the pages of the Bible. The first mention of salt in Scripture is also the most infamous. In Genesis, God rains down sulfur on Sodom, Gomorrah & Co. for debauchery and neglect of the poor. Lot’s wife cranes her neck for a forbidden glimpse of the startling sight and transforms into a block of sodium chloride.

Like Utah, Israel and the surrounding region boast high concentrations of salt in areas such as the Dead Sea, the City of Salt, and the Valley of Salt — areas largely recognized as places where nothing sprouts, nothing grows. Jeremiah leans into this wasteland imagery when he says those who turn away from God will reside in a “salt land where no one lives.”

The majority of salt’s mentions appear far more positive. Salt symbolizes new beginnings and a separation from the past. Elisha tosses salt into a spring to purify the waters and signal a fresh start. The curse on the water is no more. Abimelech dumps salt on a captured city to represent a break from the past to forge a new way forward.

Ezekiel alludes to a rather strange practice using the fine grains. He describes rubbing newborns with salt as part of a baby’s care after delivery. This is more than prophetic imagery: midwives of that time used salt as a natural loofa for removing any vernix, as well as to deter the growth of bacteria.

Salt is also added to the incense used in the tabernacle’s daily worship. The divine recipe includes spices and minerals like stacte, onycha, galbanum, frankincense — and sodium too. The sacred perfume stimulates the Israelites’ olfactory memories, signaling to their bodies, minds, spirits, and emotions the call to worship. God knew long before modern perfumers that salt unlocks a range of aromatic notes. Even today salt is added to scents to unearth fruity, floral, and citrus layers, as well as to accentuate the smokiness of woody aromas.

Moses tells the Israelites to add salt to their offerings, and in the process, the people agree to a “covenant of salt forever before the lord.” The Hebrew word for covenant, be ̆riyth, means an agreement between two parties, based in trust, to fulfill their ends of the deal. The two parties of the covenant, God and His people, exchange salt, a tangible symbol of loyalty and friendship, to show the permanent nature of their agreement. Through salt, God reveals His indissoluble relationship with those He loves.

The Jewish people have not forgotten their salt covenants with God. To this day, every Friday at sunset, many practicing Jews still dip their bread into salt to keep their agreement with God.

Perhaps my love affair with salt is a reminder of something bigger.

Jesus Shakes Our Understanding of Salt

The moment I pull the screen from the kitchen window, Leif looks concerned.

“Just a little project, no worries,” I assure him. He knows me well and appears unconvinced.

I gather the rest of my supplies: a hammer, safety glasses, clean cloth, parchment paper, disinfectant wipes, and a large salt rock. I use the parchment paper to create a clean surface. A self-professed germaphobe, I wipe down the hammer and screen three times with the wipes, then place the rock in the center of the paper, and wham!

The vibrations from impact cause salt granules and chunks to break free. Wham! Wham! The window screen doubles as a filter. I repeat the process of smashing then shaking the particles through the wire frame. Twenty-six minutes later, a cup and a half of freshly mined, freshly ground salt rests in my hand.

This collection is closer to what Jesus and His disciples enjoyed. None of the references to salt in Scripture refer to the highly refined, altered substance we’re used to — fortified with iodine and chemicals since 1924. Biblical salt was always sourced and harvested with its surrounding minerals.

You are the salt of the earth.

With these words, Jesus awakens each of us to our divine purpose. We are agents of preserving.

The curing practices that began in ancient Egypt quickly spread throughout Israel. Even the place where Jesus delivered this teaching as part of the Sermon on the Mount, overlooks the Sea of Galilee and Magdala, a town famed for the curing of fish. When Jesus mentions salt, everyone knew its primary role as a preservative.

In essence, Jesus tells His disciples and us today: We are agents of preserving. God has placed us in this culture, in this time, in this moment, in this slice of history, to preserve the ways, the teachings, the life, the power, the presence of Christ.

But salt does more than preserve; it also seasons, unlocking delicious flavor. While too much of a good thing can be a bad thing, the right amount of salt will create unforgettable dishes.

Yes, as the salt of the earth, we are an important preserving agent and a vital flavoring agent, but we’re also something more.

But if the salt loses its saltiness, how can it be made salty again? It is no longer good for anything, except to be thrown out and trampled underfoot.

Salt can, and does, lose its saltiness through the influx of other substances, he explained. When salt is overpowered, it loses its ability to perform as God designed, as an influencer.

We discover this as he frames Jesus’s teaching in slightly different terms.

Salt is good, but if it loses its saltiness, how can it be made salty again? It is fit neither for the soil nor for the manure pile; it is thrown out.

This is a new twist, involving dirt and… ahem… smelly stuff.

Gardeners often wince at the idea of applying salt to soil, because large amounts will impoverish the land. But the proper amount of salt will cause plants to flourish. That’s why both sodium and the salt substitute potassium chloride appear on the list of ingredients of Miracle Gro. It’s not only humans who require salt to live; plants and soil need it too.

The Luke passage suggests that salt plays a role in manure, too. Salt helps break down fresh excrement for better plant absorption. The mineral also prevents dunghills from rotting and becoming useless for providing nutrients to crops.

Luke clarifies that when Jesus warns of losing our saltiness, He’s not describing table salt; He’s describing fertilizer salt. Yes, as the salt of the earth, we are agents of human flourishing. Jesus is calling us to be fertilizer in His Kingdom. We are the salt poured on that which is foul in order to foster fresh, new life. We are created to help others blossom and bud as they pursue the life God intends. Flourishing lives demonstrate evidence of the Kingdom of God.

“Salary” and “salad” aren’t the only words derived from the Latin root sal, meaning salt. So too is the word “salvation.”

Sometimes the places Christ sends you will feel manure-like — the last places, the last people, the last situations you’d ever want to engage. Like Jonah, you may be tempted to resist the hardship, the discomfort, the awkwardness and stinkiness, to stay in your comfort zone. Yet, it’s your salty fertilizer that brings salvation to a dysfunctional and dying world.

And don’t forget the kind of salt the disciples used was harvested with its surrounding minerals. Those trace elements gave the salt its uniqueness. In the same way, God uses you with all your naturally harvested “minerals” — your specific upbringing and personality and giftings and weaknesses and quirks.

God leverages everything from your past wounds to your everyday work as He sprinkles you and other Jesus-followers throughout the world.

For me, it’s hard to know where to begin some days. I become overwhelmed by the sheer quantity of needs that flood my inbox and mailbox, my texts and social media feeds. In search of how to find a way forward, I once stumbled on wisdom tucked into some ancient Jewish writings known as the Talmud. There it says that if someone is suffering and in need, and you can take away 1/60 of their pain, then that is goodness, and the call to help is from God. This is a powerful expression of our being the salt — the preservers, the flavorers, the fertilizers — of the earth.

That fraction — 1/60 — is loaded with freedom. This liberates us from the pressured thinking that whispers, Everything depends on you. Your one little grain of salt can help with something someone else’s grain can’t. And when all the grains get mixed and sprinkled together, preserving and flavoring and helping others flourish occurs everywhere.

None of us are meant to preserve the whole earth, flavor the whole world, flourish the entire planet on our own. Yet you can begin today by simply asking God to bring to mind someone for whom you can ease 1/60 of their pain. And don’t be surprised if the person is closer than you think.

Take a few moments in prayer to ask God to show you someone for whom you can ease 1/60 of their pain, beginning today. Most people are simply waiting for you to invite them into your life and give them the gift of your presence.

Write the name(s) God brought to mind on a piece of paper, along with how you’ll ease their pain. Invite the person for coffee, a walk, a delightful activity. Send an encouraging note. Pick up the phone. Mail a care package.

We are the salt of the earth, sisters! We don’t have to be (and can’t be) everything to everyone. But, we can ease someone’s pain. Who are you serving today in a special way to love them like Jesus? We want to know! Come share with us on our blog. ~ Laurie McClure, Faith.Full

You’re invited on a delectable pilgrimage to discover the secret to savoring every day!

With Margaret’s delightful curiosity and whimsical humor, you’ll learn to:

-Nurture deeper connections around any table

-Learn how you were uniquely created to help others flourish

-Unlock the satisfying and fruitful life you’ve been created for