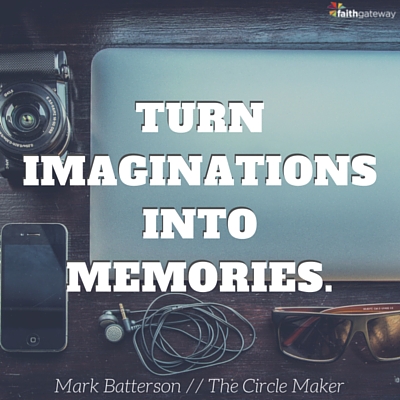 Goals are as unique as we are. They should reflect our unique personality and passions. And we arrive at them via different avenues. But these ten steps to goal setting can guide us as we circle our life goals.

Prayer is the best way to jump-start the process of goal setting. I highly recommend a personal retreat or season of fasting. I came up with my original life goal list during a two-day retreat at Rocky Gap Lodge in Cumberland, Maryland. The relaxed schedule gave me the margin I needed to dream big, pray hard, and think long.

If you set goals in the context of prayer, there is a much higher likelihood that your goals will glorify God, and if they don’t glorify God, then they aren’t worth setting in the first place.

So start with prayer.

If you set selfish goals, you would be better off spiritually if you didn’t accomplish them. That’s why you need to check your motives. You need to take a long, honest look in the mirror and make sure you’re going after your goals for the right reasons.

One of our goals — to create a family foundation — was inspired by my role as a trustee for a charitable foundation. The man who created the trust was tragically struck and killed by an automobile while visiting London, but he had written the trust into his will. It’s been almost two decades since his death, but his legacy is the hundreds of ministries that have received seed money in the form of a grant. No matter how much or how little money we make, that legacy of generosity is inspiring us to do something similar as a family.

It is hard to pull life goals out of thin air, so I recommend looking at the life goal lists of others. Don’t cut and paste someone else’s goals, but it’s a great way of getting your own ideas.

Another trick that has helped me is thinking in categories. My goals are divided into five categories: (1) family, (2) influential, (3) experiential, (4) physical, and (5) travel. The obvious omission is a category for spiritual goals, but that is by intention. All of my goals have a spiritual dimension to them. Some of them are obviously spiritual, like taking each of my children on a mission trip or reading the Bible from cover to cover in seven different translations, but running a triathlon with my son was a spiritual experience as well.

Just like our prayers, our goals need to be specific.

If a goal isn’t measurable, we have no way of knowing whether we’ve accomplished it. Losing weight isn’t a goal if we don’t have a target weight within a target timeline.

One of the ways I’ve increased the specificity of my goals is by attaching ages to them. I want to complete a triathlon in my fifties and sixties. Those are two separate goals that are time-stamped. I’ve also added nuances that make my goals more meaningful. I don’t just want to see the Eiffel Tower; I want to kiss Lora on top of the Eiffel Tower. It was extremely difficult to attach numbers to some of my giving goals and writing goals, but I decided it was better to aim high and fall short than to aim low and hit the target.

And it’s OK to make revisions to our visions.

I have a saying that I repeat to our family and our staff all the time: “The shortest pencil is longer than the longest memory.” If you haven’t written down your goals, you haven’t really set them. Something powerful happens when you verbalize a goal, whether in a conversation or in a journal. And it’s more than a good idea; it’s a God idea: “Record the vision and inscribe it on tablets.”

On more than one occasion, I’ve been able to achieve a goal almost immediately after setting it. A few years ago, I blogged about a new goal that I had just added to my list: visiting the Castle Church in Wittenberg, Germany, where Martin Luther posted his ninety-five theses and sparked the Protestant Reformation. The very next day I got an invitation to be part of a gathering of leaders and thinkers to discuss what the next Reformation might look like. The place? Wittenberg, Germany. And our gathering took place on Reformation Day!

At some point in the process of goal setting, you need to muster the courage to verbalize it.

That act of verbalization is an act of faith.

When you write down a goal, it holds you accountable. The same goes for a prayer journal. I used to think that written prayers were less spiritual because they were less spontaneous. I now think the opposite. A written prayer requires more faith simply because it’s harder to write it than to say it. But the beautiful thing about written prayers in particular and prayer journals in general is that you have a written record of your prayer. Too often we fail to celebrate an answer to prayer simply because we forget what we asked for before God answers!

I used to have a lot of personal goals, but I have replaced most of them with shared goals. Nothing cements a relationship like a shared goal. Goals are relational glue. And God set the standard with the Great Commission. If you want to grow closer to God, go after the God-sized goal He set nearly two thousand years ago. I’ve also discovered that when you go after a goal with another person, it doubles your joy.

Many of my goals revolve around my family. They are tailored to the unique personality and passions of my wife and children. Josiah is the biggest football fan, so he got in on the goal of going to the Super Bowl. My daughter, Summer, is a gifted swimmer, so I thought swimming the Escape from Alcatraz, a 1.5-mile swim from Alcatraz Island to San Francisco, would be a great goal for us to go after. And Parker has my adventure gene, so he went with me to Peru last year to hike the Inca Trail to Machu Picchu.

One of the most important life goals on my list is creating a discipleship covenant for my sons. I think I’ve made more mistakes than the average father, but I knew I needed to get this right. When Parker turned twelve, I had circled his birthday in prayer. I spent months praying and planning a discipleship covenant with three components: spiritual, intellectual, and physical. The physical challenge was training for and completing a sprint triathlon. The intellectual challenge was reading a dozen books together. The spiritual challenge included reading through the New Testament, identifying our core values, and putting together his first life goal list.

At the end of that year, we celebrated the completion of the covenant by going after a life goal on both of our lists: hiking the Grand Canyon from rim to rim. Those two days will forever rank as two of the most challenging and fulfilling days of my life. We made the 23.6- mile hike in July as temperatures climbed above 120 degrees Fahrenheit.

I lost thirteen pounds in two days! It was one of the hardest things I’ve ever done, but that is what made it so memorable. I’ll never forget the feeling as my son and I ascended the Bright Angel Trail and made it to the top of the South Rim. The first thing we did was get a vanilla ice cream cone at the concession stand. Then we just stood on the rim looking back at the trail we had traversed. No one can take that moment or that memory from us.

7. Celebrate along the Way

When you accomplish a goal, celebrate it. When God answers a prayer, throw a party. We should celebrate with the same intensity with which we pray. One of my favorite Hebrew words is ebenezer. It means “thus far the Lord has helped us.” When you accomplish a God-ordained goal, it is an ebenezer moment. You need to find a unique way to celebrate it and commemorate it. Whenever I write a new book, for example, our family celebrates with a special meal on the day the book is released. And I get to choose the restaurant!

Setting goals is the way you turn imaginations into memories, and once you do, you need to celebrate them.

One of my crazy goals is to make a movie. I have no idea how this goal will be accomplished. If I had to guess, it’s more likely I’ll write a screenplay than land a role as a stunt double. But who knows? I have no idea how it will happen, but this motivation traces all the way back to one of my earliest memories. When I was five years old, I put my faith in Christ after watching a movie called The Hiding Place. Somehow God used the medium of a movie to save my soul. I’d like to make a movie that does the same for someone else.

Most of us overestimate what we can accomplish in two years, but we underestimate what we can accomplish in ten years. If we want to dream big, we need to think long. Big dreams often translate into long goals. My goal of leading National Community Church to give $25 million to missions won’t happen next year, but if we give faithfully and sacrificially over the next twenty-five years, we’ll get there. And Lora and I want to lead the way with one of our long goals: giving away $10 million over our lifetime.

If you want to dream until the day you die, you need to set goals that take a lifetime to achieve.

And it’s never too late to start.

Excerpted with permission from The Circle Maker by Mark Batterson, copyright Zondervan.

Have you made a list of life goals? God knows the dreams that you have and the things you want to accomplish in life, so bring them before Him! Join the conversation on our blog! We want to hear from you about setting God-ordained life goals! ~ Devotionals Daily