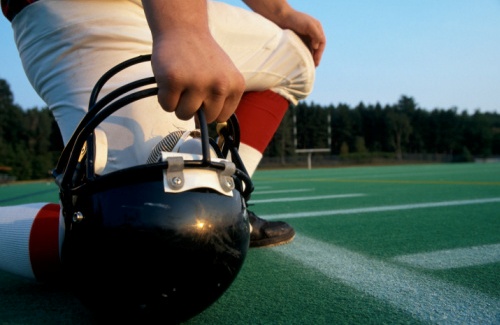 Editor’s Note:  Jeremy Williams captured the nation’s imagination by coaching his high school football team to unprecedented heights while combating ALS and caring for a son with spina bifida. America first met Jeremy and Jennifer Williams when Extreme Makeover: Home Edition rebuilt their Depression-era farmhouse into a beautiful, handicapped-accessible haven. This is an excerpt from his family’s inspiring story, Tenacious —a tender love story, a thrilling sports story, and an unforgettable testimony to the power of faith and grit in the face of almost overwhelming adversity.

Jeremy Williams loved having the opportunity to play out his faith as he played out his football, whether in victory or in defeat.

Jeremy saw football as a way to put his beliefs into action, to show how a Christian can behave with integrity.

He had many opportunities to let the message of the gospel shine through his actions.

For example, there was a game against Arkansas State during Jeremy’s junior year that seemed to be a fairly routine and easy victory. The Tigers ultimately won 37–7. But an incident during the fourth quarter became the talk of college football that day. Tiger receiver John Bush caught a pass and was tackled. But as he lay on the ground, an Arkansas State defensive lineman walked up, lifted his foot, and stomped on Bush hard enough that Bush had to be helped off the field later. By that time, chaos had overcome the game.

The stomping took place near the Memphis State sideline. It was visible enough to instigate a huge brawl within seconds. Players from both sidelines ran onto the field. Helmets were wielded as clubs. One player grabbed a metal cup holder and began brandishing it as a weapon. Brett Whiddon actually saw a player leap up and perform some kind of martial arts kick. The whole thing played out on ESPN SportsCenter later that night.

Groups of large, athletic, and angry football players can quickly become powerful and frightening mobs. But Jeremy refused to be sucked into the rising flames. Instead, he did what he could to keep teammates calm. He pulled his friends back toward the sidelines, shouting for them to stay out of the fracas. As a team leader, a voice of reason, he commanded respect.

At the end of the game, when time came for the traditional midfield handshake, officials and coaches were still trying to keep the teams separated due to fear of another brawl. But Jeremy began walking toward the Arkansas State sideline. He immediately heard the voices of the officials and coaches shouting at him: “Get back on your side! Turn around, 19!” But Jeremy kept walking until he reached Ray Perkins, the head coach.

Perkins had been the head coach at Alabama. He had coached in the NFL. Jeremy thought he deserved respect, so he reached out and shook his hand. He did it because he believed it was the right thing to do. He also hoped he could visit for a moment with an old teammate from Kendrick, Delray Stephens, who played for Arkansas State.

Jeremy’s action was one little ray of light during a dark moment on the gridiron.

The next season, 1993, would be Jeremy’s final one as a player. During that senior season, he played in a tough contest in Little Rock against Danny Ford’s Arkansas Razorbacks. Undertaken in a driving rain, the game was messy and hardplayed. Memphis State had been struggling that season, losing two straight and giving up 54 points to Louisville. But that day against Arkansas, Memphis brought one of its greatest defensive performances. The final score was 6–0 Tigers, the only shutout of Jeremy’s years in Memphis.

None of that meant as much to him as what happened after the final whistle blew. The Fellowship of Christian Athletes contingent from MSU came to the middle of the field for a prayer huddle. A few Tiger players had been doing this since Jeremy’s freshman year. The huddle had grown gradually over the years, from postgame to postgame. But this time the prayer warriors looked up to see the entire Memphis State team joining them—plus a number of Arkansas players. For the first time since Jeremy came to Memphis, the entire squad was united in prayer after a contest, locking arms with their opponent.

Three hours of physical ferocity were forgotten, and suddenly it was a field of wet, tired, but friendly young men, united in faith, seeking God together.

The fans, gathering their belongings and preparing to leave, suddenly fell silent as they saw what was happening down on the field. Razorback followers were sullen and disappointed over a frustrating loss, but the grimaces now melted off many of the faces. Having been emotionally consumed by a boys’ game, they were now reminded of what meant the most in life and where victory could be found even in the midst of smaller defeats.

It was one of those moments of perspective. No one who was there ever forgot it.

For Jeremy, that quiet incident summed up everything he loved about his college experience. This was his senior year, the end of the road for his football ambitions. He wasn’t going to play NFL defense at his size, no matter how great his heart was.

But he was still going to be a man.

And he still planned on surrounding himself with young men like these—young men who needed a living, walking Bible among them, in case they didn’t get around to reading the printed one.

Playing football was over for Jeremy Williams, but as far as he was concerned, all of that was just the pregame ceremony. The real game, which wasn’t a game at all, lay just ahead. His career was set to begin, and he knew in his heart that God had special plans for it.

Has God ever brought you into situations where you had to step up and be a light in dark times? Share your tenacious moments in the comments section below! We’d love to hear from you. 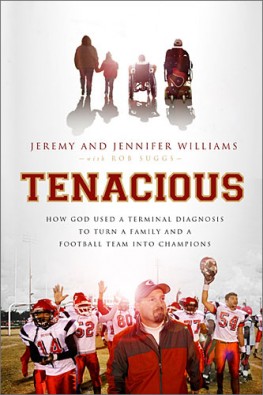