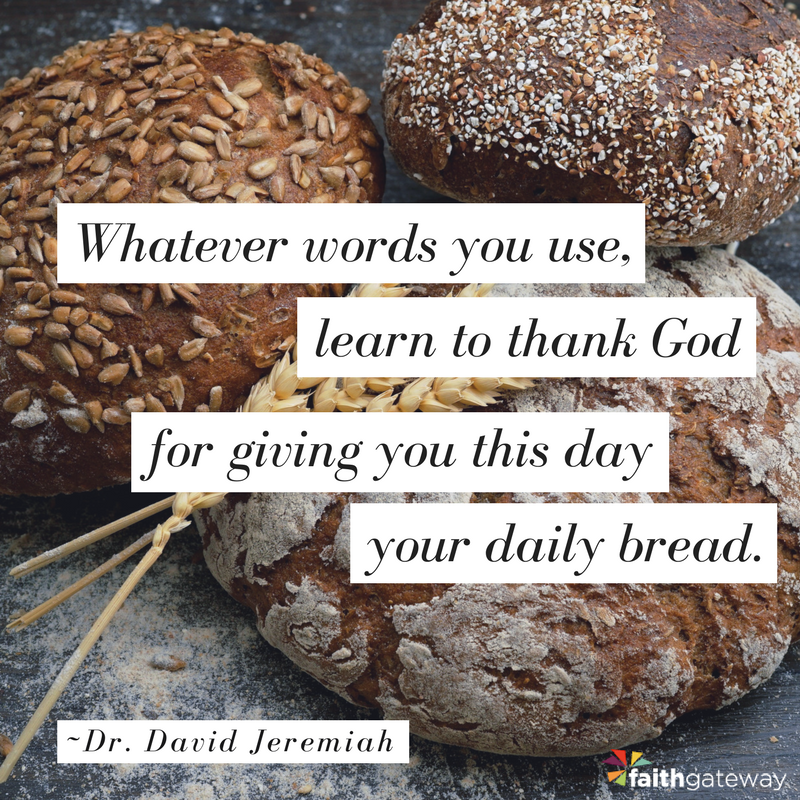 I’d Rather Be a Dog

Rev. William Biederwolf once shocked his audience by saying, “I’d rather be a dog with gratitude enough to wag his tail… than to be a man with a soul so contemptibly mean as to sit down at the table three times a day and gulp down the food God has provided and never once lift my heart in thanksgiving.”

We might not put it like that, but the point is well taken. When Jesus told us to pray, “Give us this day our daily bread,” He was teaching us dependence upon Him for daily provision (Matthew 6:11). Even our Lord paused to give thanks before breaking the bread in John 6.

“Saying grace” shouldn’t be a perfunctory act, and we shouldn’t use the same words each time.

Try praying an original prayer at each meal.

At breakfast: “Lord, thanks for giving someone enough wisdom to invent high-fiber cereal.”

At lunch: “Lord, thanks for this food, but keep me from eating too much of it.”

And at supper? Well, you could say, “Lord, I’d rather be a dog than fail to thank You for this meatloaf.”

Whatever words you use, learn to thank God for giving you this day your daily bread.

The Job of Thanksgiving

Heman and Jeduthun… were designated by name, to give thanks to the Lord. — 1 Chronicles 16:41

Perhaps you’ve never heard of these two men; they’re among the Bible’s more obscure characters. Yet their role was paramount. In the great worship choirs of King David, they were appointed to give thanks. Jeduthun and Heman “were under the authority of the king,” says 1 Chronicles 25:6. And they were designated by name to give thanks. It was their job!

Giving thanks is our job too. We’re under the authority of a King who commands:

Be thankful… Offer to God thanksgiving… Come before His presence with thanksgiving… Enter into His gates with thanksgiving… In everything give thanks; for this is the will of God in Christ Jesus for you. — Colossians 3:15; Psalm 50:14; Psalm 95:2; Psalm 100:4; 1 Thessalonians 5:18, respectively

This is one of God’s commands for healthy living. The Creator of the soul is the Master Psychologist. He knows that thanksgiving is not only appropriate but therapeutic. It’s hard to be both thankful and, at the same time, grumpy, cantankerous, critical, or ill-tempered.

Be a Heman. Be a Jeduthun.

We are appointed by the King to praise His name and to thank Him every day.

Are you thankful to God like it’s your job? If you’re feeling grumpy, cantankerous, critical, or ill-tempered, stop for a moment and give thanks! What are you thanking Him for? Come share with us on our blog. We want to hear from you! ~ Devotionals Daily