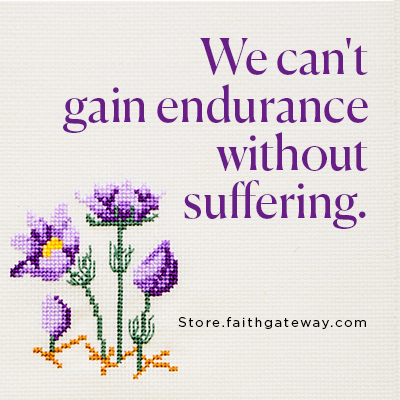 Life with Christ will not be pain-free. This is a prominent theme throughout Scripture. First, let’s just acknowledge how abnormal it is to embrace such a life.

When traveling from point A to point B, we enter the destination into our navigation system, expecting it will provide us with the shortest route. The one with the least amount of traffic and road construction. When we are moving toward something positive — adopting a child, for example — we pray against obstacles and roadblocks. And this is a reasonable request. But following Jesus may mean laying aside our obsession with productivity, efficiency, and timeliness. As we wind our way through each detour and trial, the lessons learned may be more valuable to God’s heart than the outcome ever was.

As much as it pains me to quote Miley Cyrus, she kind of had it right. “Ain’t about how fast I get there / Ain’t about what’s waiting on the other side / It’s the climb.”1

Along with Miley, someone else knew this well and wrote about it. In his letter to the Romans, the apostle Paul encouraged the Christians in light of the trials and tribulations they were facing. The church during this time was experiencing mistreatment at the hands of the Roman government, and storm clouds on the horizon signaled this would soon become full-scale persecution when Nero became emperor. Paul’s teaching for Christians in Rome is as relevant today as it was when he wrote these words:

Therefore, since we have been justified by faith, we have peace with God through our Lord Jesus Christ. Through him we have also obtained access by faith into this grace in which we stand, and we rejoice in hope of the glory of God. Not only that, but we rejoice in our sufferings, knowing that suffering produces endurance, and endurance produces character, and character produces hope, and hope does not put us to shame, because God’s love has been poured into our hearts through the Holy Spirit who has been given to us. — Romans 5:1-5

Notice from the outset that Paul is not telling us the secret to living a trouble-free life, or how to avoid trouble when we see it coming. He is addressing the attitude we should adopt in the midst of suffering.

My normal response to anything hard is to figure out how to get out of it. Is there an easier way to fix the leaky shower than ripping up the entire tile floor? Must I really apologize to that person I offended? God of mercy and grace, do I really have to go to jury duty? While we’re focused on finding the way around a trial, God is more concerned with how we live by faith through it.

He knows what’s at stake, how the struggle can make our character more like Christ’s.

Our Trials Are a Means to an End

As we continue to read the opening verses of Romans 5, we sense it is building to a climactic conclusion. And it is. Paul wrote to remind us of the joy we can now experience, the access we have to God, and the hope we have received through faith. But we quickly learn that our hope is the result of a process of endurance.

It’s as if we’re watching The Price Is Right, and we’ve made it all the way to the grand Showcase Showdown. Drew Carey is listing off all the wonderful items in the showcase: the new surround-sound entertainment system, the new washer-and-dryer combo, and a pair of matching Jet Skis. But then, as the excitement mounts to the grand prize, which is almost always “a brand new car!” the host instead announces, “Your grand prize is a month of cleaning restrooms at the rest stops along the interstate of your choice!” I say this tongue in cheek, of course. Sure, it is amazing to think about what God has for us through Christ, but Paul made it sound as though the capstone, the grand prize of the Christian life, is embracing tribulations!

But God is not the author of evil, nor is He a masochistic deity who delights in the suffering of his children. What Paul was describing here is the hard road God sometimes allows His children to walk because it is the only way to become what God created us to become. This journey is the means to producing Christ’s character in us. And so Paul tells us, “We rejoice in our sufferings,” not because we are crazy. Not because we have a sadistic martyr complex. Paul said it’s because

Let’s consider, briefly, those four words — suffering, endurance, character, and hope — and how this progression works.

First, suffering. I can almost see your faces sour at the mere mention of the word! Imagine what the word suffering would look like in calligraphy on a nicely distressed panel of wood. We see a thousand options for wall decor on Etsy, lovely sentiments to hang in our kitchens that say “blessed” or “grateful” or “gather.” I’ve yet to find one of those pretty signs that says “suffering”! Yet there it is at the top of Paul’s list. The very thing all of us spend an enormous amount of time and money trying to avoid is what Paul tells us leads to some of the most sought-after attributes.

Paul continued to say that suffering leads to endurance. Wait a minute. Was Paul saying that suffering always leads to endurance? Of course not. Yet you have to admit that endurance is not something you can gain without suffering. There is no longed-for finish line without the race. There is no remission to celebrate without the initial cancer. Though no one longs to suffer, it is essential to gaining the virtue of endurance. And I would even suggest, as Paul did here, that endurance is the natural by-product of suffering for the life of a Christ follower.

Not only do we gain endurance; we gain character. It’s hard to imagine anyone in their right mind not wanting to be described as a person of character. But when Paul used the word our English Bibles translate as “character,” he wasn’t referring to someone with nary an overdue library book or unpaid parking ticket. In the Greek, the word Paul used was dokime, meaning “the result of trial.” The version of character Paul was referring to is not possible apart from suffering. It’s the diamond formed from continued exposure to the heat and pressure of the earth. It’s the beautiful canyon forged by the piercing pressure of roaring waters. Character is not cheap to come by, but it may be your most valuable possession. This is the character of which Paul spoke.

Lastly, Paul shows us the product of the first three words — hope. The simple mention of the word lightens my heart. Hope is what keeps us going in the dark. It’s believing that God is working in the unseen. Hope is essential to our Christian faith, but, as Paul reminds us, the faint of heart don’t acquire it. It all begins with a willingness to endure suffering. Even endurance and character are not the simple by-products of attending a weekly Bible study or memorizing a favorite verse. They are works of the Spirit, birthed in our hearts along the road of suffering.

In order to live lives of hope, Paul tells us we must be willing to suffer, thus practicing endurance, thus gaining character.

It’s sometimes easier to see this principle playing out in others rather than in myself. For the past two years I’ve had the privilege of leading a small group of women in a Bible study at our church. I use the word lead loosely. I tell the ladies when we are meeting, we all bring our Bibles, and God teaches us through one another’s insights. I would say the greatest joy of being in this group has been getting a front-row-seat view into their lives. I know by now that it is not my job to change anyone or make them “better Christians.” Some of my Christian sisters have carried burdens I wish I could have taken away, but it is not my job to help them wiggle out of the hard places in their lives. I have wept with them over the loss of loved ones, the struggles in their marriages, job transitions, the processing of childhood abuse, and the pain that comes with raising children.

In the moment, I wished I could have snapped my fingers and made the pain disappear. But now, when I step back, I’m grateful I could not. Now when I look at this group of ladies, I see stronger mothers. I see a depth of dependence on the Lord that wasn’t there before. I witness a gentleness of spirit where there was once anger. I see a willingness to laugh at chaos where there was once rigidity and control. I see the Lord doing so much in their lives! When I desperately wanted to pluck them out of the hard spot, God had me simply pray. In some moments, I got to crawl right in there with them. But it was God working in their trials, not my skillful teaching or fancy curriculum, that produced the fruit.

So back to Ben’s question, which I’ll tweak to better reflect our journey: Can we get to the amazing vista of spiritual maturity apart from the rugged climb? Paul’s answer is pretty clear. But rather than this truth leading to discouragement as it did for Ben, let it bring you comfort. Just because you are walking a difficult path doesn’t mean that you are on the wrong road. And

in the Kingdom of God, nothing is wasted.

What trial are you facing right now? Do you believe God the Father has sovereignly allowed it in your life for your good and His greater glory? Do you believe there is a specific work of sanctification, a refining of the self, that the Spirit is doing, making you into the person God wants you to be? And do you believe that obedience by grace is possible even in the hardest of trials and loneliest of seasons? The Trinity is working in you and for you. Which leads us to our next glorious truth: though our trials may be long, we are never left alone in them.

Excerpted with permission from So Long, Normal by Laura Story, copyright Laura Story.

No one wants to suffer trials, and yet the furnace is where God refines us through pressures and sufferings into people of character, hope, and endurance! Think about what you are going through right now… It’s not wasted… God is using your trials to bring out gold. Come share your thoughts with us. ~ Laurie McClure, Faith.Full