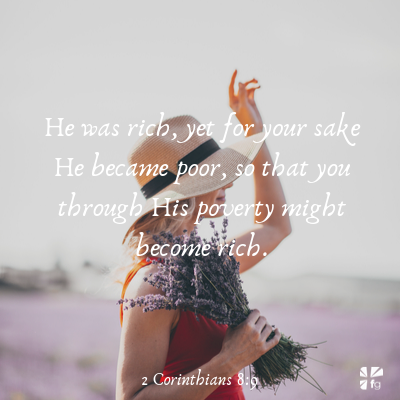 I am the Word that became flesh. I have always been, and I will always be. In the beginning was the Word, and the Word was with God, and the Word was God. As you think about Me as a baby, born in Bethlehem, do not lose sight of My divinity. This baby who grew up and became a Man-Savior is also God Almighty! It could not have been otherwise. My sacrificial life and death would have been insufficient if I were not God. So rejoice that the Word, who entered the world as a helpless infant, is the same One who brought the world into existence.

Though I was rich, for your sake I became poor, so that you might become rich.

No Christmas present could ever compare with the treasure you have in Me! I remove your sins as far as the east is from the west — freeing you from all condemnation. I gift you with unimaginably glorious Life that will never end! The best response to this astonishing Gift is to embrace it joyfully and gratefully.

In the beginning was the Word, and the Word was with God, and the Word was God… The Word became flesh and made his dwelling among us. We have seen his glory, the glory of the One and Only, who came from the Father, full of grace and truth. — John 1:1, John 1:14

In the past God spoke to our forefathers through the prophets at many times and in various ways, but in these last days He has spoken to us by His Son, whom He appointed heir of all things, and through whom He made the universe. — Hebrews 1:1-2

For you know the grace of our Lord Jesus Christ, that though He was rich, yet for your sake He became poor, so that you through His poverty might become rich. — 2 Corinthians 8:9 NASB

Praise Jesus! No matter what presents show up under the tree on Christmas morning, we already have the best gift that’s ever been given. It’s up to us to receive it and live with gratitude toward Him for making us so rich! Come share your thoughts with us on our blog. We want to hear from you! ~ Devotionals Daily