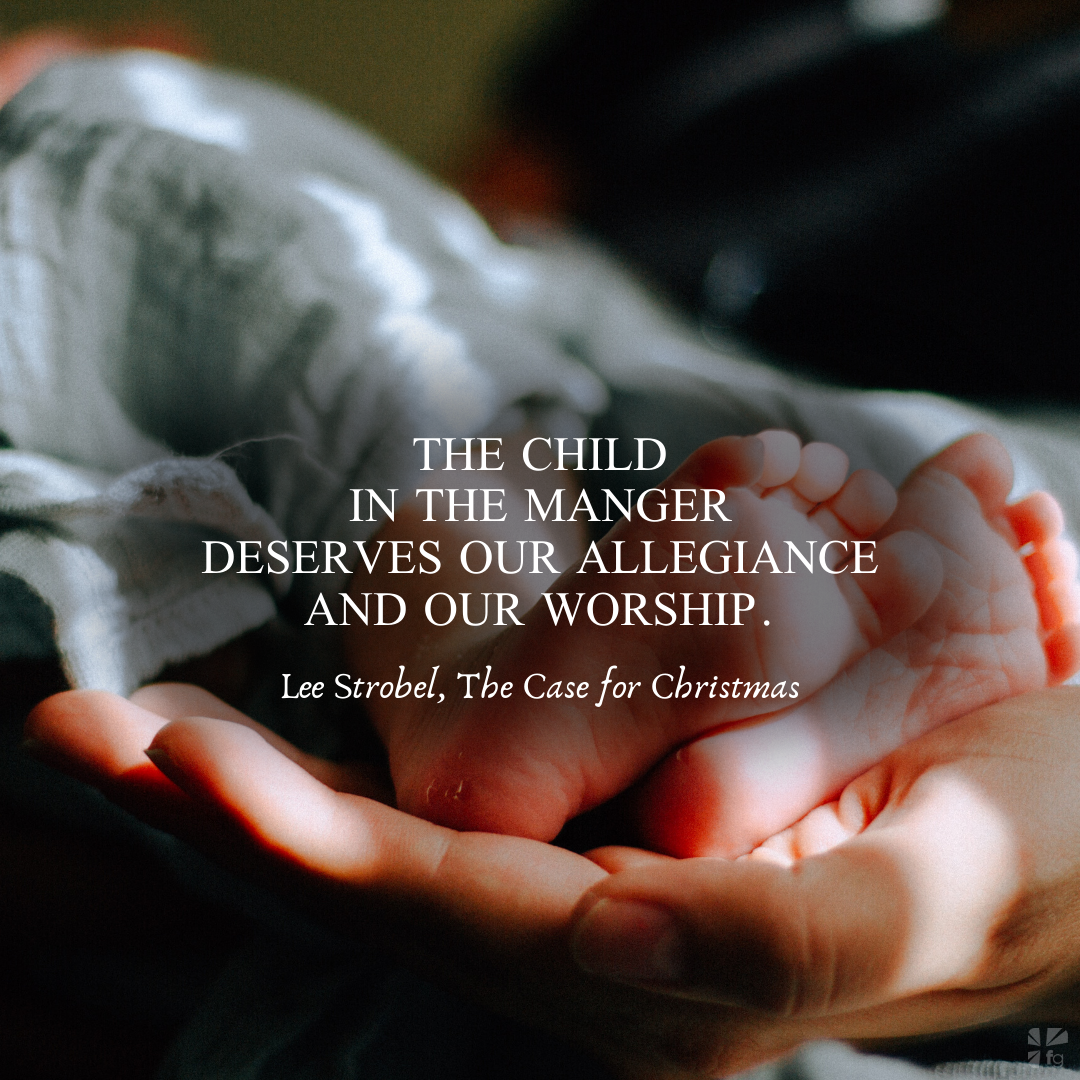 The Son of God became a man to enable men to become sons of God. ~ C. S. Lewis, Mere Christianity

Holidays just bring out the best in us. Whether it’s roses and chocolates for Valentine’s Day, or baskets of candy for Easter, or flags and fireworks for the Fourth of July, we love the celebratory focus a holiday brings to our lives.

Of course, there’s little debate over the best of all holidays. It has to be Christmas. When you close your eyes, you can almost see the forest as you hike to cut down your very own Christmas tree. The scent of fresh pine permeates the air on the way back to the car — and once home, there’s the smell of those Christmas cookies in the oven that the kids and grandkids created in the shapes of angels, shepherds, and Christmas trees.

The sounds of Christmas fill the house with the music of the season. You’ve already lost track of how many times you’ve heard Bing Crosby sing “White Christmas” or Elvis sing “Blue Christmas” or Mariah Carey sing “All I Want for Christmas Is You.” The lights on the newly decorated tree bring a warm glow to the whole house.

As evening falls and the dinner dishes are cleared, it’s time for another Christmas tradition — watching those classic Christmas movies. There’s a long list of family favorites: A Christmas Carol, Holiday Inn, A Christmas Story, Miracle on 34th Street, Home Alone, Elf, How the Grinch Stole Christmas, and Christmas Vacation… just to name a few.

And let’s not forget what many consider the finest Christmas movie ever made — Frank Capra’s It’s a Wonderful Life. You remember that one, don’t you? The movie centers on George Bailey, who lives with his wife and children in Bedford Falls. The drama begins when George’s Uncle Billy is supposed to deposit $8,000 of George’s business receipts into the bank, but Billy loses the money. The town villain, Mr. Potter, finds the cash and realizes it is exactly what he needs to put George out of business. In doing so, he can then take over the town.

George is despondent when he hears about the loss and doesn’t know what to do. He believes his life insurance policy could cover the loss, and he concludes that he’s worth more to his family dead than alive. As he contemplates suicide, he meets an angel named Clarence, who helps him sort out his issues. Clarence shows George what the world would be like without him in it. George discards the plan for suicide. A happy ending ensues.

There are so many memorable lines in the movie, but one stands out for our purposes. It’s a tantalizing theological morsel uttered by the Baileys’ little daughter, Zuzu:

Every time a bell rings, an angel gets his wings.

You don’t have to be a learned theologian to sniff out the theological weakness of Zuzu’s statement. The connection between bells and angel wings seems flimsy at best. But did you know there are more traditional statements about Christmas — the first Christmas — that are equally suspect? We will look at a few of those in this opening session.

Pair up with another group member, ideally someone you don’t know that well, and briefly talk about the following questions:

What’s your favorite Christmas movie? How about a favorite character? Is there a favorite memory you can share of a time when you watched this movie with your family or friends? What is your family’s tradition as it relates to the opening of presents? Does your family open their gifts on Christmas Eve or on Christmas morning? Do you have a nativity scene that you display during this time of year? What would that scene look like without the stable or the wise men? (It would make the scene look a bit different and less familiar, wouldn’t you agree?)

Watch Session One: The Case for Christmas

It would have been unthinkable in the first century for anyone to turn away a pregnant Jewish woman seeking shelter. The person who turned her away would be ostracized.

Luke specifically chose the Greek word katalyma in the account of Jesus’ birth, which is best translated as “guest room.” In fact, the New International Version translates Luke 2:7 as saying Mary placed Jesus in a manger “because there was no guest room available for them.”

Luke says the time for Jesus to be born came “while they were there” in Bethlehem. Luke doesn’t portray this as an emergency situation that arose as they approached the village.

What about the idea that Mary gave birth in a cave? Actually, the Gospels don’t mention a cave at all. In fact, the idea of a cave can be traced back to Christian apologist Justin Martyr, who was writing much later — during the middle of the second century.

It’s a legitimate question to ask whether we can trust the Gospel accounts. How do we know they are reliable? Can we be sure they are trustworthy when they describe the birth, the teachings, the death, and — ultimately — the resurrection of Jesus? Yes, for two reasons:

First, they were written a lot closer to the events they describe than some critics claim.

Second, archaeology has consistently affirmed the biblical record — to the point where Luke has been described by scholars as a first-rate historian.

We need to take seriously the historical record of the birth of Jesus. Because it’s true, Christmas cannot be ignored. In the end, the child in the manger deserves our allegiance and our worship.

Once the video has concluded, break into small groups for a time of discussion. Ideally, the group should be no less than four people and no more than six. Don’t be shy — grab your chair and circle up! Find someone who will become your partner over the next few weeks. If you’re married and your spouse is in the group, you’ve got the option of choosing him or her, or you may opt for someone completely different. If not your spouse, it’s best for women to choose another woman and men to choose another man. Get your new partner’s cell phone number and email so you can connect during the week.

Conclude your group discussion time with a few minutes for prayer. Nothing will bring your group together quicker than knowing you have brothers and sisters who care enough about issues you raise to bring them before the Lord for His answers and His direction.

Come share your thoughts and questions with us on the blog. We want to hear from you!