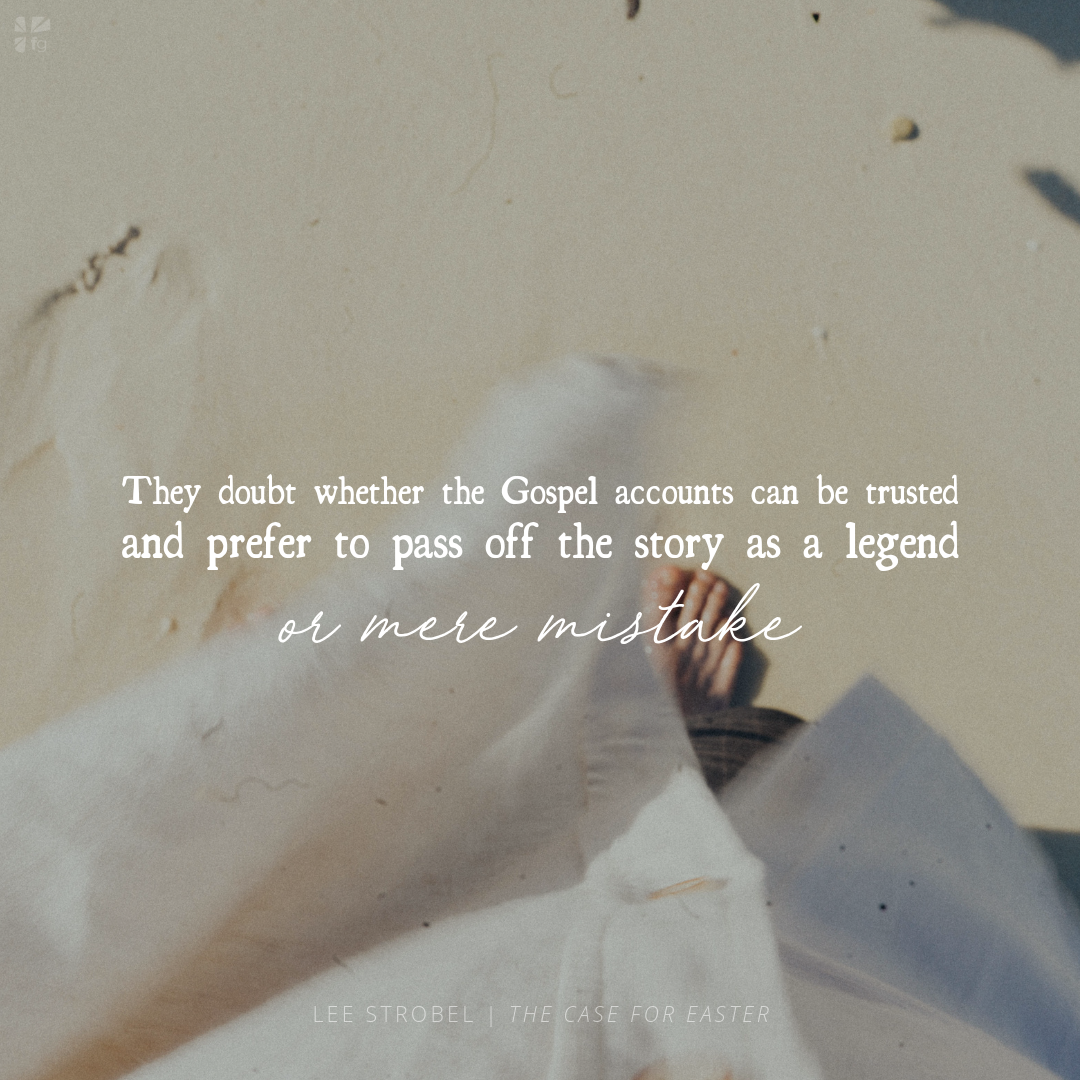 A man who was merely a man and said the sort of things Jesus said would not be a great moral teacher. He would either be a lunatic… or else he would be the Devil of Hell. You must make your choice. Either this man was, and is, the Son of God; or else a madman or something worse. ~ C. S. Lewis, Mere Christianity

For many of us, there were two stories in our childhood that captured the essence of Easter. Like the rails of a train track, the duo never intersected but ran in parallel tandem through our memories. The first was the story of the Easter Bunny. We heard tales of the happy white rabbit, dressed in human clothes, who would fill empty baskets with all sorts of our favorite chocolate candies… if we behaved ourselves throughout the year.

The other rail was more serious. It was the story of Jesus Christ, who died on the Cross in a grotesque manner known as a crucifixion on Good Friday, but then miraculously rose from the grave on Easter Sunday to show his power over sin, death, and hell. Easter would likely find us dressed in our Sunday finest, attending a church service (whether we were regular church attenders or not), and returning home to baskets of melting chocolate while we waited for the family’s traditional Easter dinner. If we were lucky, there would be an after-dinner Easter egg hunt featuring color-dyed, hard-boiled eggs.

The Easter Bunny and the resurrection of Jesus. One is decidedly childish, while the other represents the most profound event to ever occur in human history. But for many people today, believing Jesus’ claims that He was the Son of God — and that He actually rose from the dead on the third day — is like believing the big magical bunny is real. They doubt whether the Gospel accounts can be trusted and prefer to pass off the story as a legend or mere mistake.

So, what proof do we have that Jesus’ crucifixion and resurrection actually took place? How can we know that He actually was executed and died on a Roman cross those many years ago? And what does the reality of Jesus’ resurrection mean in our lives? In this first session, we will start to dig into these issues by examining the events surrounding Good Friday and, in particular, the Roman execution-style murder that took place that day.

Pair up with another group member, ideally someone you don’t know that well, and briefly talk about the following questions:

Some have claimed there is no scriptural text in which Jesus said explicitly He was divine. But just because Jesus didn’t make this claim directly doesn’t mean He didn’t make it at all.

Throughout the Gospels, Jesus’ claims to divinity were crystal clear to His audiences — as if He had said outright, “I am God.” For instance, in John 10:30, Jesus declared,

I and the Father are one

which caused His opponents to accuse Him of blasphemy.

Christianity is an investigate-able religion. While the origins of many world religions are lost in the mists of history, Christianity makes specific claims about events that occurred in time and space — right there in the first century.

When we scrutinize the data of history, we find four facts that establish convincingly that Jesus rose from the dead — which we can call “the four Es.” The first E stands for execution — Jesus was truly dead after being executed by the Romans at the behest of the Jewish leaders.

Before He was crucified, Jesus was flogged by Roman soldiers. In fact, He was evidently flogged two separate times. The Greek word used to describe the flogging indicates a punishment inflicted after a death sentence has been pronounced.

Because of the terrible effects of this beating, there’s no question Jesus was already in serious-to-critical condition even before the nails were driven through His hands and feet.

Once the video has concluded, break into small groups for a time of discussion. Ideally, the group should be no less than four people and no more than six. Don’t be shy — grab your chair and circle up! Find someone who will become your partner over the next few weeks. If you’re married and your spouse is in the group, you’ve got the option of choosing him or her, or you may opt for someone completely different. If not your spouse, it’s best for women to choose another woman and men to choose another man. Get your new partner’s cell phone number and email so you can connect during the week.

Conclude your group discussion time with a few minutes for prayer. Share one another’s needs and requests and offer them up to God. Nothing will bring your group together quicker than knowing you have brothers and sisters who care enough about issues you raise to bring them before the Lord for His answers and His direction.

Come share your thoughts on The Case for Easter on our blog! We want to hear from you!