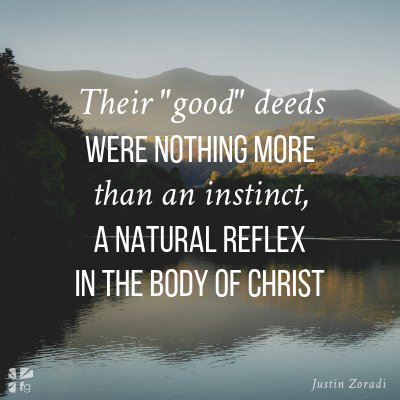 Do your little bit of good where you are; it’s those little bits of good put together that overwhelm the world.
– Desmond Tutu

Largely unnoticed in European history books is the tiny French village of Le Chambon. Mountainous, impoverished, and easily overlooked, the small town of Le Chambon represents a miracle of unparalleled compassion. During the four years of the German occupation of France in the 1940s, this sleepy town helped nearly five thousand Jews, most of them children, navigate through Nazi-occupied France into neutral Switzerland.

Like so many great endeavors, the story of Le Chambon began with a very small action. On a cold, dark evening in the winter of 1940, there was a knock at the door of André Trocmé, the Protestant minister of Le Chambon. Roused from his seat near the fire, he answered, and there stood a hungry, cold woman. She was a Jewish refugee fleeing the Nazis. Could she come in?

Trocmé said yes. A tiny matchstick of a word.

Little did he know, this simple act of kindness would ignite a highly organized rescue effort wherein ordinary French villagers harbored thousands of refugees in their private homes, hotels, and farms. Trocmé’s response to a moment of obligation inspired his fellow villagers to enroll Jewish children in local schools, claim them as their own to government officials, and forge ration cards by candlelight to ensure the refugees were safe and fed.

When word of a Nazi raid was imminent, the residents of Le Chambon moved Jewish refugees to the countryside. One of the villagers later recalled, “As soon as the soldiers left, we would go into the forest and sing a song. When they heard that song, the Jews knew it was safe to come home.”1

The conspiracy of goodness in Le Chambon wasn’t only for the most courageous. Reports indicate that nearly every home hid Jews, not for days, but for years. So deep was their commitment that no resident of Le Chambon ever turned away, denounced, or betrayed a single Jewish refugee. Elizabeth Koenig-Kaufman was a former child refugee in Le Chambon and described her experience like this: “Nobody asked who was Jewish and who was not. Nobody asked where you were from. Nobody asked who your father was or if you could pay. They just accepted each of us, taking us in with warmth, sheltering children, often without their parents—children who cried in the night from nightmares.”2

Right under the nose of the Gestapo, the residents of Le Chambon, often poverty stricken themselves, protected the Jews despite risk to their own lives. In June of 1943, the German police raided a local secondary school and sent five Jewish students to Auschwitz. They also arrested their teacher, Daniel Trocmé—Pastor Trocmé’s cousin—and deported him to the concentration camp, where he was killed.

Soon thereafter, Pastor Trocmé himself was identified as the leader of the operation. He was arrested and interned in a French prison camp for twenty-eight days. During his interrogation, the French government demanded he cease his illegal activities. His response was clear: “These people came here for help and for shelter. I am their shepherd. A shepherd does not forsake his flock. I do not know what a Jew is. I know only human beings.”3

History books tell us it is great men and great armies who make history. Compared to the mighty military campaigns of World War II, the story of Le Chambon is a small one. The worth of moral action is often measured by the number of people it impacts, so ordinary individuals affecting the lives of a few are easily overlooked. With nearly 70 million lives lost in World War II, a few French eccentrics in Le Chambon did virtually nothing to stop Hitler’s war machine and death camps. Their mountainous village was an irrelevant drop in the bottomless ocean of war.

But in the secret rooms and converted attic spaces of Le Chambon, the actions of a Protestant minister and a few hundred allies were far from insignificant. They believed God acts in stealthy ways, under the radar, and so should they. They believed Christian compassion was tangible, a light of goodness filtering under door frames, shining in dark corners, and chasing out shadows. They believed each individual life saved was one step closer to the end of the war. Despite any criticism of their tireless work in this century or the last, the Chambonnais remind us, “Real people with their own proper names saved real human beings in that village. And these precious few people count.”4

The actions in Le Chambon were carried out not by City Hall or the Red Cross but by individual citizens in the privacy of their homes, led by both men and women alike. In their daily decisions of courage, mostly at their kitchen tables and in small groups, the Chambonnais shouldered the crushing need of the world, and they did so gladly. André Trocmé’s wife, Magda, even considered their actions a “hobby” for her and her friends, as they skillfully smuggled Jews into neutral Switzerland through a highly organized underground network. They were ordinary citizens motivated by the preciousness of each human life, acting in the moment for the right purpose.

André and Magda Trocmé would later reflect on their lives and remember 1934 to 1944 in Le Chambon as their happiest years. It is when they believe they did their most important work. In the 1970s, an American named Philip Hallie spent a few months in Le Chambon, conducting research for a book he would later write, called Lest Innocent Blood Be Shed, which chronicled the story of the heroic Chambonnais.

In almost every interview Hallie had with the Chambonnais, they were put off by the moral complexity of his questioning and confused as to why he was exploring this topic at all. Hallie writes that there came a moment when nearly every interviewee would pull back and look firmly into his eyes. One after another, they responded with, “How can you call us ‘good’? We were doing what had to be done. Who else could help them? You must understand that it was the most natural thing in the world to help these people.”5

Their “good” deeds were nothing more than an instinct, a natural reflex in the body of Christ. For the villagers of Le Chambon, the question that arose from Nazism wasn’t how could God allow such evil to occur, but how God works through ordinary people to combat such evil. Rather than overtheologizing and overanalyzing, the Chambonnais jumped in headfirst. There wasn’t time to attend a conference on orchestrating a social movement or wait for a diploma to hang on an office wall. Guided by a belief in humanity and true feelings of empathy, they met in their one-room church, trained themselves, and changed the world.

The astounding compassion of these French commoners has humbled me greatly. Yet, as modern people looking back on history, we have the tendency to romanticize its dissidents into superhuman saints, immortalized in stained glass. The courage of the Chambonnais seems almost Marvel-comic worthy, existing in a time and place outside the human experience. But we can’t forget that the Chambonnais were farmers, builders, stay-at-home moms, and schoolteachers. Being ordinary is what made them powerful.

Just like you and me, the Chambonnais were made for their time in history. As I’ve reflected deeply on what it means to be made for these times and do work that matters, one thing has become clear: this is as much about our own personal and spiritual development as it is anything else. My quest for meaning happened to begin across the world, but the principles in this book are for all types of people, no matter where you live or what you do. A life of purpose isn’t about what you’re doing; it’s about who you are becoming. As David Brooks writes, “Social transformation flows from personal transformation. You change the world when you hold up a new and more attractive way to live.”6

3. “Under the Wings of the Church: Protestant Pastor André Trocmé,” Yad Vashem, www.yadvashem.org/yv/en/exhibitions/righteous/trocme.asp.

4. Phillip P. Hallie, prelude to Lest Innocent Blood Be Shed: The Story of the Village of Le Chambon and How Goodness Happened There (New York: Harper Perennial, 1994), xv.

6. David Brooks, “Everyone A Changemaker,” The New York Times https://www.nytimes.com/2018/02/08/opinion/changemaker-social-entrepreneur.html.

By this everyone will know that you are my disciples, if you love one another. – John 13:35

How does the story of the Chambonnais inspire you? How can you start to become the kind of person whose “natural reflex” is to love like Christ? We’d love to hear your thoughts in the comments!