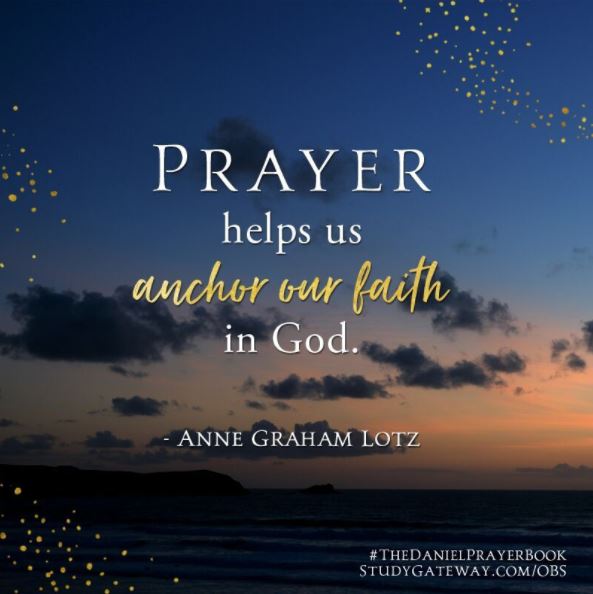 This is a sneak peek of session two of The Daniel Prayer Bible Study, a six-session study with bestselling author and Bible teacher Anne Graham Lotz. Join us for all six sessions this summer during our online Bible study at Study Gateway! Sign up now to get access to all six videos and other free downloads!

Just as an athlete can’t expect to win by showing up at game time without having practiced, the commitment to pray doesn’t just happen. It requires preparation. ~ Anne Graham Lotz

When we first meet Daniel, we find that he and his people (the Israelites living in Judah) were in trouble. After years of warnings from God to turn from their wicked ways, judgment had finally come upon them in the form of a foreign invading force.

In the third year of the reign of Jehoiakim king of Judah, Nebuchadnezzar king of Babylon came to Jerusalem and besieged it. — Daniel 1:1

In a relatively short period of time, Judah was erased from the map. She no longer existed as she had for more than 500 years. She was a people and a nation in exile.

Daniel was approximately fifteen years of age when he was captured by the Babylonians, taken from his homeland, and transported 800 miles away to serve as a slave in the king’s court. In a moment, everything about Daniel’s life changed: his culture, his customs, his language, his clothes, and his name. Because his immediate superior was chief of the eunuchs, he may also have been cruelly stripped of his masculinity to make him more subservient to his new master. His situation must have seemed utterly hopeless to him — because, in every obvious way, it was.

Yet through it all, Daniel maintained his faith in God and his devotion to Him.

We see this most clearly in the way that Daniel made prayer the center of his life. He never forgot the temple that had been at the heart of Jerusalem and of the nation. Even later in his life, he remained mindful of the sacrifices that had been offered to God there as an act of worship. He longed for Jerusalem every day, as evidenced by the fact that three times daily, when he prayed, he turned his face in the direction of his beloved city that once had been. 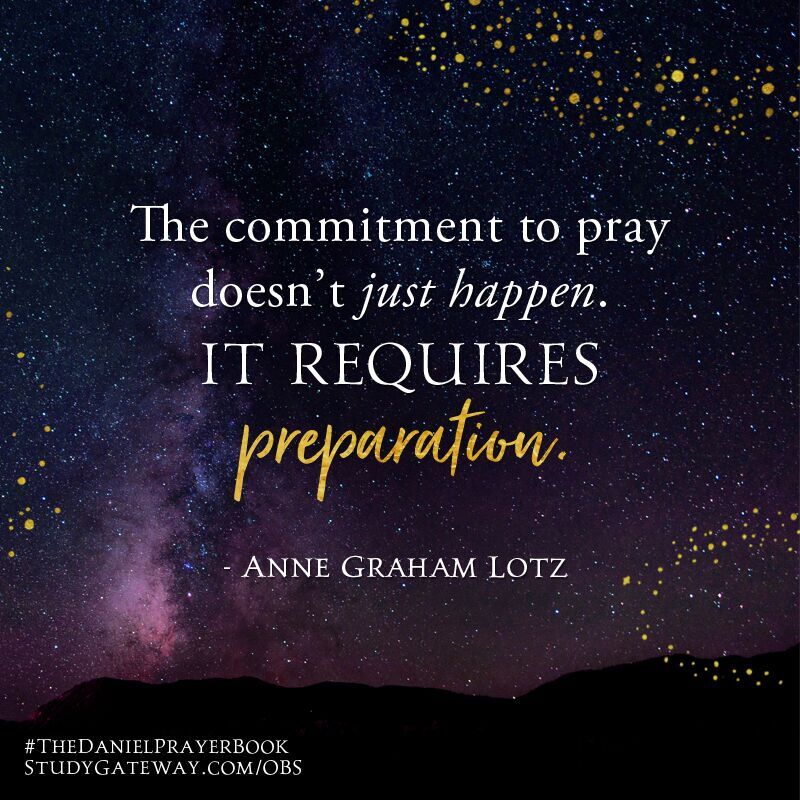 On one occasion, we overhear him pleading with God on behalf of his nation. Ultimately, God answered by moving a ruler named Cyrus to issue a decree that after seventy years of captivity, every Jew living in Babylon could return home. Just think about this.

What kind of prayer — offered by one person — could move Heaven and change nations?

What was needed for Daniel to be able to pray in that way? What can we learn from his example?

One of the first lessons we learn is that kind of prayer requires preparation. The kind of preparation Jesus taught His disciples in Matthew 6.

Begin this week by reading Matthew 6:5-18, and then work through each of the personal Bible studies using the steps you learned in session one of The Daniel Prayer, The Bible Study Workshop. You will review the lessons and personal applications during your group session and then watch the teaching from Anne, which points out the application in Daniel’s life of the principles Jesus taught.

The following outline may help you as you watch the video teaching.

Take a few minutes to discuss some of these questions.

This week, you studied Matthew 6:5-18 and learned what Jesus teaches about preparing for prayer. Think back on how you responded to this passage of Scripture (step 5 in your daily studies). Write down some areas you need to work on to better prepare your heart to pray as Daniel did.

What I will do to prepare for prayer…

Some 700 years before the conquest of Judah, King Solomon had prayed,

When [the people] sin against you… and you become angry with them and give them over to the enemy… and if they turn back to you with all their heart and soul in the land of their enemies who took them captive, and pray to you toward the land you gave their fathers… then from heaven, your dwelling place, hear their prayer and their plea. — 1 Kings 8:46, 1 Kings 8:48–49

Daniel had followed this practice of praying toward Jerusalem during his captivity, and he did not alter it even in the face of death. Why was he so committed to this practice?

Three times a day, when Daniel went to his designated place for prayer, he opened his windows toward Jerusalem. The poignant gesture revealed not only the longing in his heart for his city and his people, but also his exclusive focus on the God of Abraham, Isaac, and Jacob. The God of his fathers. The God who had been with him throughout his lifetime, for over eighty years. The one, true, living God whom Daniel worshiped and served and obeyed. — Anne Graham Lotz, The Daniel Prayer, page 38

Daniel had cultivated a lifetime habit of prayer and was unwilling to compromise even the smallest detail in his worship to the Lord. Even though he was in captivity and under constant threat, three times a day — without fail — he expressed his thankfulness to God. Today, as you prepare to move forward, consider what it would look like for you to cultivate such an attitude toward God. Write out your own heart-prayer to God, expressing your gratitude to Him in spite of whatever challenges or trials you are facing.

Get ready to pray in a way you may have never prayed before!

You, yes you, can pray prayer that moves Heaven! Will you join us this summer?

We’re making the companion study videos available to you for FREE. That’s right, all 6 sessions – releasing a new one every week! Register now and get the schedule, free downloads, and all the great bonuses!

If you enjoyed this sneak peek at session two, you’ll love all 6 sessions of The Daniel Prayer Online Bible Study.