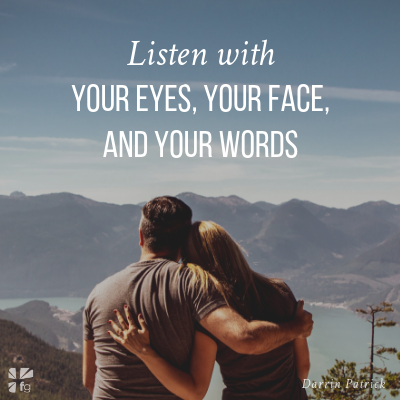 Husbands, live with your wives in an understanding way. — 1 Peter 3:7

Women like it when you listen to them. They are funny that way.

My wife often asks if I hear what she says: “Are you really listening to me?” Many times I’m not. I mean, I am, but I’m not. I hear words coming from her cute, perky lips, but I often fail to listen to the heart behind those words. The truth is I wish my wife wouldn’t talk so much. She could say what she is trying to say with way fewer adjectives and superlatives. She knows how to get to the point. She is aware that I have a short attention span. She has studied my thoughts, actions, and words for twenty years. Yet she keeps talking.1

I’d rather be the one talking. I literally talk for a living. I traffic in words. There is nothing quite like standing up in front of fifty or five thousand people and uttering a profound, life changing statement. To be able to hold the attention of people with my words is one of the greatest gifts I have been given. But there is a dark side to this gift. When I talk, I’m in control. I like being in control. I like giving directives. I like solving problems. Not every man has a job that requires public speaking, but every man uses words. We like to give our opinions, state our case, and instill our wisdom. We use words, and when we do, we feel like we are in control.

Death and life are in the power of the tongue.

Words are quite spiritual. We learn from the Bible that in the beginning God created the whole universe with a word. God reveals who He is through the created world generally, but through His words (the Bible) specifically. God has given us words to build a relationship with Him. That’s called prayer. Words aren’t just organized noise coming out of our mouths. They are a spiritual force that has power.

Men and women use this controlling force in distinct ways. Men tend to view themselves as individuals in a hierarchical social order in which they are “either one-up or one-down.”2 Women usually view the world as a network of connections in which conversations are negotiations for closeness and consensus. Men talk with a focus on achieving social status and avoiding failure, while women focus on achieving personal connection and avoiding social isolation.

These different ways of conversing are known as report-talk (men) and rapport-talk (women). Report-talk is information oriented, focused on objectivity and practicality. Rapport-talk is relationship oriented, emotionally expressive, and engaging. When you come home from work, and your wife asks, “How was your day?” she is attempting to engage in rapport-talk. When you respond, “Fine,” you assume she was looking for a report.

Why Do Wives Stop Talking?

Many husbands think their wives talking less is a good thing. Not so much. When your wife gives in to report-talk and stops trying to gain rapport, it doesn’t mean you’ve won. It means she’s no longer pursuing connection. If you think having a wife who talks too much is the worst thing possible, wait until she stops.

The other day I noticed Amie was especially silent. Later in the day that silence morphed into coldness. I could tell she had been hurt by something I had done. I racked my brain, trying to figure out how I had offended her. What had I done that morning? It turned out the offense had occurred earlier in the week. My wife was trying to express her feelings about an upcoming family event. I was preoccupied and said, “Amie, just figure it out. I’ll do whatever you want.” She interpreted this to mean, “Darrin doesn’t care and is unwilling to engage with me about our family.” Guilty as charged. She was right.

Because of her experiences with her husband and with counseling other women, Amie has some wisdom here.

A wife stops talking to her husband when she’s given up hope that he will be a safe place for her to share her heart. She’s probably resorted to having her need to be listened to met by someone else — girlfriends, Mom, coworkers, or even another man. The good news is that it’s never too late to change course. A great place to start would be to tell your wife, “I know I’m a terrible listener and I’ve hurt you. I want to change. Will you help me?” She may not come around immediately, but genuine humility and vulnerability go a long way in healing broken places.

They Are Tired of Excuses

Many wives have set the right environment, have tried to approach their husbands in the right spirit and at the right time, and have been given the Heisman (stiff-arm) multiple times. Husband, when conflict arises, you are far more likely to stonewall (shut down and become unresponsive). Faced with intense, troubling emotions, you will just sit there silently, trying not to react, just idling in neutral. You may not intend harm, but it is hard for your wife not to view it as disapproval and rejection.3 Her knee-jerk response is to perceive your silence as hostility. A wife gets tired of pushing through her husband’s walls.

They Are Tired of Being Fixed

Women want to be heard, not fixed. They are open to encouragement, challenge, and even rebuke, but usually only after they have been listened to. Research from Dr. John Gottman tells us, “Women are more sensitive to advice-giving than are men.” A wife will usually react “very negatively” if you try to problem solve her troubles without trying to empathize.4

Amie has found it very helpful when I ask, “Do you want me to help solve the problem, or do you just want me to listen?” Ninety-eight percent of the time she just wants me to listen and understand her perspective. She is more open to proposed solutions if I have spent several minutes patiently listening to her.

Their Husbands Are Distracted

What Can Husbands Do to Communicate Listening?

I have learned to love listening to my wife. Over the years I have grown in how to show Amie that I am interested in understanding her heart through her words. I am learning to express affection for her and validate her emotions with my mouth closed and my ears open. The other day after Amie attended two of our kids’ parent-teacher conferences, I asked her what the teachers said and what she felt about the interaction. Now, this was a huge step in that I actually engaged her heart (what she felt) and not just her head (what the teachers said). When she was talking, I made sure I was listening with my body. You can actually listen with your eyes, your face, and your words.

This is the big E on the eye chart. Look at your wife. Focus on her eyes, which are windows into her soul. Her eyes will communicate even more than her words. Don’t look through her, but look to her. Don’t be afraid of her. Engage her face. My friend Dave Gibbons says, “If we paid as much attention to our wife as we do our phones, we would probably have a great marriage.”

Watch Your Face and Body

As a public speaker, I am hyperaware of nonverbal communication. I try to zone in on a few individuals to see if my message is connecting. Are they engaged, or are they bored? Do I need to pause and be more descriptive? Do I need to omit a point that isn’t relevant? How does the crowd give these cues? Nonverbals. When their arms are folded, faces frowned, eyes intent on their phones, they signal that they aren’t engaged or don’t know how to show that they are engaged. If I show my wife that I am interested in what she is saying with good nonverbals, I actually become more interested in what she is saying.5 When your wife talks, nod, smile, lean forward, do whatever is appropriate to tell her you are interested in her perspective.

Act as if you are at a drive-through.6 One person speaks, and the other repeats what he or she heard.

1. A few years ago, a statistic was floating around that men speak an average of seven thousand words a day, while women speak an average of twenty thousand words a day. When I first heard those numbers, my marriage struggles suddenly had context. Though it rings true for many of us, the notion was debunked. It originally received prominent attention in Louann Brizendine’s The Female Brain (New York: Broadway Books, 2006). But according to Matthias Mehl, researcher at the University of Arizona, “no one had ever systematically recorded the total daily output in natural conversations of a sizable number of people.” Richard Knox, “Study: Men Talk Just as Much as Women Do,” NPR.org, July 5, 2007, http://www.npr.org/templates/story/story.php?storyId=11762186).

3. “Accustomed to working through emotional problems with her female friends, the wife is likely to find her husband’s withdrawal devastating, infuriating, and inexplicable.” John Gottman, Why Marriages Succeed or Fail (New York: Simon & Schuster, 1994), 148.

4. John Gottman, The Seven Principles for Making Marriage Work (New York: Three Rivers Press, 1999), 88–89. Sue Johnson wrote, “If I appeal to you for emotional connection and you respond intellectually to a problem, rather than directly to me, on an attachment level I will experience that as ‘no response.’ This is one of the reasons that the research on social support uniformly states that people want ‘indirect’ support, that is, emotional confirmation and caring from their partners, rather than advice.” The tragedy here is that a man may be doing his best to answer his wife’s concerns by offering advice and solutions, not understanding that what she is really seeking from him is emotional engagement. His engagement is the solution for her. Hold Me Tight (New York: Little, Brown and Company, 2008), 83.

5. This is one implication of Paul Ekman’s work on smiles. Mark G. Frank and Paul Ekman, “Physiological Effects of the Smile,” Directions in Psychiatry 16 (December 10, 1996), https://www.paulekman.com/wp-content/uploads/2013/07/Physiological-Effects-Of-The-Smile.pdf.

Excerpted with permission from The Dude’s Guide to Marriage: Ten Skills Every Husband Must Develop to Love His Wife Well by Darrin & Amie Patrick.

How can you engage more through active listening in your marriage, or in your other relationships? We’d love to hear your thoughts in the comments!