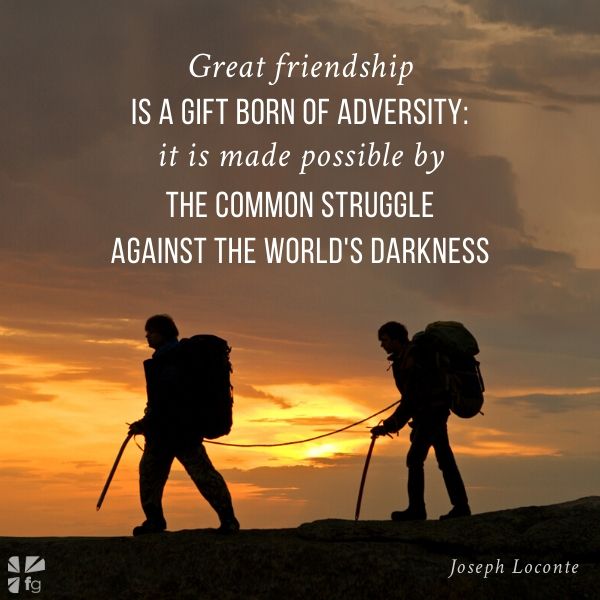 Editor’s note: C.S. Lewis and J.R.R. Tolkien were two of the most prolific writers of faith and fiction in the 20th century. They were also great friends, and Tolkien was a guiding force in Lewis coming to faith in Christ. Both men also served as soldiers in the First World War, survived the trenches, and remarkably used the experience of that conflict to ignite their Christian imagination. Had there been no Great War, there would have been no Hobbit, no Lord of the Rings, no Narnia, and perhaps no conversion to Christianity by C.S. Lewis.

Enjoy this excerpt from Joseph Loconte’s powerful book A Hobbit, A Wardrobe, and a Great War, as he explores how the conflict these two men faced helped forge their friendship and the themes of their writing.

It is no accident, of course, that Tolkien called the first book of his trilogy The Fellowship of the Ring. Part of the immense attraction of the story is watching a contentious assemblage of hobbits, dwarves, and elves put away their differences and fight alongside one another against each new threat and danger. They begin their quest as reluctant allies, suspicious and even distrustful. Before it is complete—and after facing many terrors and setbacks—they are transformed into a fellowship of the noblest kind.

At the start of their journey, Elrond advises the Company that each may continue only as far as he chooses; none are under obligation to help the Ring-bearer all the way to Mount Doom. Gimli is quick to respond: “Faithless is he that says farewell when the road darkens.” When Frodo arrives at Crickhollow, before setting out into the Old Forest, he is determined to leave on his own; he does not want to expose his companions to the perils that lie ahead. But Merry, Pippin, and Sam are wise to his plans and confront him before he can slip away. They insist on coming with him. Frodo, deeply moved, nevertheless protests. “But it does not seem that I can trust anyone.” Merry is unflappable:

“It all depends on what you want. You can trust us to stick to you through thick and thin—to the bitter end. And you can trust us to keep any secret of yours—closer than you keep it yourself. But you cannot trust us to let you face trouble alone, and go off without a word. We are your friends, Frodo. Anyway, there it is. We know most of what Gandalf has told you. We know a good deal about the Ring. We are horribly afraid—but we are coming with you; or following you like hounds.”1

As vital as the Fellowship of the Ring is to Tolkien’s story, the bond of friendship between Sam Gamgee and Frodo Baggins is one of the great triumphs of the work, inspired, as we have seen, by the rugged service of the batmen and soldiers in the trenches along the front. Like no other, Sam is the friend who would “jump down a dragon’s throat” to save Frodo, “if he did not trip over his own feet.”2 Tolkien once called Sam “this jewel among the hobbits.”3

Sam’s loyalty is tested from beginning to end, from the decision to leave the Shire to the final approach to Mordor. “It is going to be very dangerous, Sam. It is already dangerous,” warns Frodo. “Most likely neither of us will come back.” Sam doesn’t flinch: “If you don’t come back, sir, then I shan’t, that’s certain. ‘Don’t you leave him!’ they said to me. ‘Leave him!’ I said. ‘I never mean to. I am going with him, if he climbs to the Moon; and if any of those Black Riders try to stop him, they’ll have Sam Gamgee to reckon with.’ ”4

When Frodo and Sam are at the threshold of Mount Doom, near the very end of their quest, they find themselves nearly without strength to carry on. For Frodo there was “no taste of food, no feel of water, no sound of wind, no memory of tree or grass or flower.” The desolation of the landscape, the black skies, the noxious fumes, the ash and slag and burned stone, and the dark slopes of the Mountain towering over them are almost overwhelming. They stagger toward their goal. Frodo, weakened by the great burden of carrying the Ring, begins to crawl on his hands.

Sam looked at him and wept in his heart, but no tears came to his dry and stinging eyes. “I said I’d carry him, if it broke my back,” he muttered, “and I will!” “Come, Mr. Frodo!” he cried. “I can’t carry it for you, but I can carry you and it as well. So up you get! Come on, Mr. Frodo dear! Sam will give you a ride. Just tell him where to go, and he’ll go.”5

It is a good bet that only men who knew friendships of this kind—who experienced them on the field of combat—could write passages of such compassion, grit, and courage. After the war, Tolkien and Lewis sought to recapture something like the camaraderie that sustained them during the crisis years of 1914–1918. At Oxford they launched the Inklings, the group of friends and fellow scholars who met weekly—Tuesday mornings at the Eagle and Child pub over beer and Thursday evenings in Lewis’s college rooms over various drinks—to discuss their works.6

For sixteen years these men gathered to read, recite, argue, and laugh together. They met faithfully, even during the darkest days of the Second World War. As Tolkien put it in a letter dated September 23, 1944: “The Inklings have already agreed that their victory celebration, if they are spared to have one, will be to take a whole inn in the country for at least a week, and spend it entirely in beer and talk, without any reference to a clock!”7 Lewis read aloud many of his most important works during these gatherings. “What I owe them is incalculable,” he acknowledged. “Is any pleasure on earth as great as a circle of Christian friends by a good fire?”8

During the course of four decades, Tolkien and Lewis became devoted to each other’s success. Tolkien, through long talks and late evenings, played a crucial role in Lewis’s conversion to Christianity. He helped Lewis find a publisher for his first novel, and was a major force in securing his appointment to the Chair of English at Magdalene College, Cambridge, in 1954, after Oxford denied him a professorship.

At the same time, the author of The Hobbit and The Lord of the Rings could have had no greater advocate for his imaginative works. Lewis even nominated Tolkien for the Nobel Prize in Literature. “C. S. Lewis is a very old friend and colleague of mine, and indeed I owe to his encouragement the fact that in spite of obstacles (including the 1939 war!) I persevered and eventually finished The Lord of the Rings,” Tolkien wrote. “He heard all of it, bit by bit, read aloud.”9

When Lewis learned that The Lord of the Rings had been accepted for publication, he wrote to Tolkien to describe his “sheer pleasure of looking forward to having the book to read and re-read.” And then he added a most remarkable perspective on the importance of the book to both their lives: “But a lot of other things come in. So much of your whole life, so much of our joint life, so much of the war, so much that seemed to be slipping away quite spurlos [without trace] into the past, is now, in a sort made permanent.”10

Such was the quality of their friendship: As with no one else, Tolkien dared to expose one of the great passions of his life, the construction of his epic trilogy, to the critical eyes of his friend and colleague. Lewis, for his part, became wholly invested in the project. Perhaps only Lewis, a soldier like Tolkien in the Great War, could recognize how his story “made permanent” their shared experience of the suffering and heartache of the war.11 Against the temper of their times, these authors dared to reclaim some of the older beliefs and virtues. Their common Christian faith had much to do with this, but perhaps no more so than their mutual love of mythic and romantic literature. As Lewis described it, they were “both soaked” in Homer, Beowulf, Norse mythology, medieval romance, and George MacDonald’s fairy tales.12 The result was a bond of loyalty and comradeship that transformed both their lives. “Friendship makes prosperity more shining,” wrote Cicero, “and lessens adversity by dividing and sharing it.”

Their experience reminds us that great friendship is a gift born of adversity: it is made possible by the common struggle against the world’s darkness. “Most gracious host, it was said to me by Elrond Halfelven that I should find friendship upon the way, secret and unlooked for,” Frodo tells Faramir. “Certainly I have looked for no such friendship as you have shown. To have found it turns evil to great good.”13

Though their friendship experienced periods of frustration and strain, it persevered to the end. “This feels like an axe-blow near the roots,” Tolkien wrote after Lewis’s death in November 1963. “We owed each a great debt to the other, and that tie, with the deep affection that it begot, remained.”14 Given the contemporary infatuation with “virtual” relationships, Tolkien and Lewis’s achievement not only remains but continues to grow in stature. Like few other writers over the past century, they show us what friendship can look like when it reaches for a high purpose and is watered by the streams of sacrifice, loyalty, and love.

Though we’ve not all been in literal battle, men often form their strongest friendships with those who they strain, work and fight alongside. C.S. Lewis and J.R.R. Tolkien are prime examples of this. What friends have you made through challenging circumstances? What task could you undertake with other men that will draw you closer together as you strive toward shared goals?