Watch the Conversation with Jim Daly:

What does it take to be a good dad? As it turns out, many want to know, but only one man tackles the topic in such a unique way that we chatted with him live and posed your questions from social media. We interviewed Jim Daly, the “head guy” at Focus on the Family and author of the new release, The Good Dad. Not only did Jim have a wealth of information to share from his role hosting Focus on the Family’s daily radio how, but he was quite candid in sharing examples from his own upbringing. After all, Jim says, “Want to know how important fathers are? Ask the guy who didn’t have one.” The father of two boys himself, Jim invites the audience into his childhood where he spent most of his childhood without a loving father, or any father at all for that matter. The good news in all this? Jim lets dads everywhere know “it’s never too late to become the father you were meant to be”.

Highlights from the Author Chat 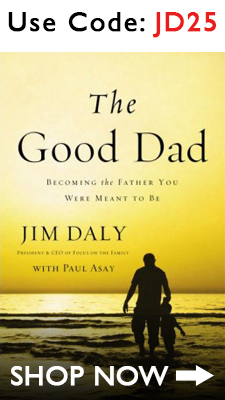