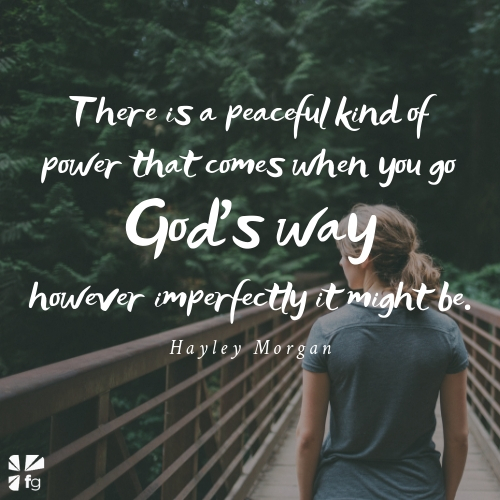 Every time you make a choice you are turning the central part of you, the part of you that chooses, into something a little different from what it was before. And taking your life as a whole, with all your innumerable choices, all your life long you are slowly turning this central thing either into a heavenly creature or into a hellish creature: either into a creature that is in harmony with God, and with other creatures, and with itself, or else into one that is in a state of war and hatred with God, and with its fellow- creatures, and with itself… Each of us at each moment is progressing to one state or the other. ~ C. S. Lewis, Mere Christianity

My oldest son Noah called to me from the shower. He had forgotten to bring a towel into the bathroom, and now he was dripping wet, freezing, and perched on the edge of the tub. I pulled myself out from under the cozy covers and padded down the hall to the linen closet, crossing my fingers that we had clean towels. It was the end of a harried week for our family, and I’d been finding that most things in our house were dirty. Of course, there were no clean towels in the closet, so I marched to the bathroom door and scolded Noah for getting into the shower without having a towel handy. I was already thinking, I can’t do this, with regard to the entirety of the day ahead if this is the way it was starting. At that same moment, I heard Asher, who is my most independent child, rummaging through a high cabinet in the kitchen. There was next to no reason for him to be in the cabinet, and as I made my way downstairs and into the kitchen, I saw him standing on his tiptoes on the counter, reaching for a mixing bowl.

“We’re out of cereal bowls,” he said with the sweetest, most apologetic look. I felt like I’d failed him, and it was about enough to put me over the edge and back into bed for the morning.

I headed back upstairs to get some consolation from my husband, Mike, and I was greeted by a panicked look that told me he was out of either socks or underwear. Today it was very possibly both.

The pitter-patter of false belief paced through my mind. It wasn’t that anything terribly awful had happened, but I didn’t get to start my morning before already feeling horribly behind. The mornings in our house are my domain, and it’s my job to make sure everyone has what they need to get a good start to the day. And today I had failed.

Before I even got into the office, I had expended great amounts of mental energy telling myself I couldn’t do something that was clearly already in motion. My false belief was that I couldn’t do it, but the reality of the situation was that I could and I was — even if it didn’t feel like it was going great.

Have you ever had one of those days when you just can’t turn it around?

Every little thing that can go wrong does, and you have a sour attitude to match? On days that like, I can feel the weird little tickle of aggression sneak up on me. It’s almost like I need to go run a mile just to get that offensive energy out. Once a day like that gets going, it’s incredibly hard for me to change directions.

Instead of just choosing correctly and making a change, I normally have to totally stop in my tracks. I have to do something to shift the momentum of the situation. I have to pull to a complete stop — throw on my brakes, perform the whole rollback. I have to keep my energy from moving forward in an unhealthy direction.

This is difficult to do. Newton’s first law of motion tells us that once an object is in motion, it will keep moving unless it is acted on by another force. If we allow our minds to keep chattering false beliefs to us, we’re likely to continue to believe them. It takes work and energy to stop the false beliefs in their tracks.

Remember how your brain works? You have billions of neurons that each fire every time you have a thought. Your neurons make connections with each other and form bonds and patterns over time. You’ve gotten into a rut with the patterns of your thoughts to this point.

Your brain has a small, seahorse-shaped part called the hippocampus. Hippocampus means “seahorse” in Latin, which seems like an elementary classifying system when we speak of such a complex organ. Alas, this tiny, seahorse-shaped region of your brain is responsible for your emotions and, in part, for your motivation. The hippocampus is chock-full of granule cells, which are one of the few neurons that the brain can generate more of. When a new neuron is formed, this is called neurogenesis. Neuroplasticity is the way these neurons connect with each other to form new pathways. There’s a lot going on in this little seahorse!

In January 2017, scientists at the University of Alabama at Birmingham found that it was possible for the brain to create brand-new neurons that wove themselves into existing neural circuits, allowing the synaptic connections to grow stronger and heartier. The old neurons would die off when the new, stronger connections were formed.1 You can’t just count on time to break down the connections in your brain; you need to actively retrain your mind to make new connections. Otherwise, you’ll simply be reinforcing the old neural pathways.

And here we find great hope. In order to move forward in something new and different, we need to renew our minds. To do that, our minds need a new connection.

Repentance can feel like a heavy word. Maybe it’s a new word altogether for you. But repentance is the way God uses to change us.

Let me show you what I mean.

When we recognize our bad news, it is a watershed moment. Hopefully you’ve been digging deep and asking God to reveal what is playing on repeat. It may take days or weeks, but I hope a pattern emerges to you. I hope you’re able to write down those thoughts or tell them to a friend, so you’ll be more apt to snatch them out of space when you think them.

When you realized the junk you were preaching to yourself, I hope you took your heavy heart to God in sorrow and asked Him to change your mind — which is what repentance is about. We really can do that! It may feel foreign to do, but we pray for physical healing from things like cancer or injuries we’ve suffered in an accident. We clearly believe that God can work at a cellular level.

When we feel frustrated or stuck in our ruts of false belief, we can pray that God will change the very neural pathways in our brain. We can ask Him to rewire the innermost parts of our minds on a biological level. He created us. He knit us together in our mothers’ bellies. I believe that He can change the way my brain tangles together and makes connections. Do you believe that too?

Let’s practice together. We can pray this prayer when we’re feeling the effects of our false beliefs:

Lord, You are mighty in me. You made me. You put every cell together and came up with me. You are the Lord of my life, and You are the Lord of my mind. Lord, I have believed things that are not true, and I’m sorry for that. Please forgive me. Lord, because You are good, would You let the ways I used to think die off and then would You blaze a new trail in my mind? Would You stop connections in my brain that are tied to my old way of thinking and form new neural pathways with Your good truth? Thank You, Lord, for Your forgiveness and for the miraculous way You made me. Please remake my mind to be more like Yours.

That is a beautiful moment of repentance — of receiving His grace that comes after we go to Him, humble, needy, unable to heal ourselves.

That is one moment of repentance — repentance for years of being a false preacher in your own head, repentance for overlooking His good news and still preferring the bad news. This is the kind of repenting that happens a thousand times a day. When you go about your day and all is well, you thank God for keeping you on the narrow path. When you catch a bad news loop gearing up, you shush it, preach to yourself, and then get back to the good news. You pray, “Forgive me, God. I want to believe; please help me overcome my unbelief.”

Don’t get stuck in guilt and shame. The work of turning around is the work of honesty and wholeness. There is a peaceful kind of power that comes when you go God’s way, however imperfectly it might be.

In Romans 12:2, the apostle Paul writes,

Do not conform to the pattern of this world, but be transformed by the renewing of your mind.

You renew; God transforms. To “be transformed” means that something outside of you is doing the transforming. You must be faithful to take the thoughts captive, but ultimately, God is the only one who can change our minds.

Have you preaching to yourself, “I can’t” today? Turn around! Be transformed by the renewing of your mind in Chris Jesus. Let’s repent today and ask the Lord to help us in our unbelief. He will! Come share your thoughts with us on our blog. We want to hear from you! ~ Devotionals Daily