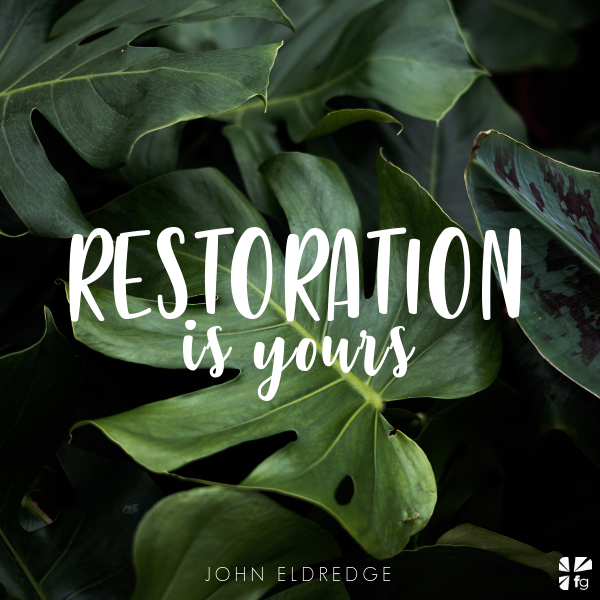 Enjoy reading as well as listening to this devotion from John Eldredge’s newest devotional, Restoration Year.

From Heaven’s Point of View

I would pay good money to have a nativity scene with Revelation 12 included. Not only would it capture the imagination, but it would also better prepare us to celebrate the holidays and to go on to live the Story Christmas invites us into.

Your vision of the nativity was shaped by classic Christmas cards and lovely crèche displays. And while I still love those tableaus very much, I’m convinced they’re an almost total rewrite of the story. I understand this traditional imagery is probably dear to you, but friend, it’s also profoundly deceiving by creating all sorts of warm expectations — many quite subconscious — of what the nature of the Christian life is going to be like.

But war in Heaven the instant Jesus was born — this is an essential part of the Story. Yes — Christmas is the glow of candlelight, and a baby sleeping in a manger. It is starlight, shepherds in a field. But Christmas is also an invasion. The Kingdom of God striking at the heart of the kingdom of darkness with violent repercussions. And victory.

Christmas is meant to remind us each year of the Great Story we live in. Not something cute and quaint from time gone by, but the most epic Story unfolding right now, all around us. What will help you remember that this year?

The angel was joined by a vast host of others — the armies of Heaven — praising God and saying, “Glory to God in highest Heaven, and peace on earth to those with whom God is pleased.” — Luke 2:13-14 NLT

As I reflect upon the mystery of the incarnation, and the great invasion of the Kingdom that began under cover of darkness in a remote village in the Middle East, so many wonders flood my heart. The wild plan of God to come the way He did, where He did, when He did, as He did. The great battle in the heavens. The immense cost. The staggering series of events that began to unfold. It really is breathtaking, more than any other story ever told.

But above all, what I wanted to offer you this Christmas is this one simple thought: It worked.

God came for you, and all that He planned and all He intended in Jesus Christ has come true. The rule of evil has been broken. You are ransomed. Your life is now filled with the life of God. The Kingdom of God has broken through. Redemption is unfolding all over the earth, and will come to a glorious climax with the return of Jesus. Sin no longer reigns over you. Restoration is yours, now. And so many other glories.

It worked. Hold on to that truth this Christmas, dear friend.

This glorious victory needs to be celebrated! How can you celebrate this wonderful truth today?

Has it ever occurred to you that Christmas is an invasion? How does that change your perspective on Advent? What will help you remember that this year that we’re living in the most epic Story unfolding all around us? Come share with us on our blog. We want to hear from you! ~ Devotionals Daily