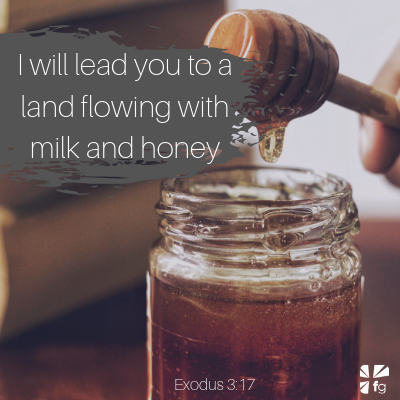 Editor’s note: Margaret Feinberg wondered, How can people understand the promise of a land overflowing with honey when we buy it in a bear-shaped bottle? So she set out on a journey to find out the significance of honey… and sheep and wine… to better understand God and have a richer relationship with Him. Enjoy this excerpt from Scouting the Divine.

One of the most popular sweeteners in history, honey is a rich, nutrient-filled food mentioned in the Old and New Testaments. Even though bees are the ones who make honey, God is portrayed as the One who provides the honey. Nearly two dozen references throughout the Old Testament describe the Promised Land as a place “flowing with milk and honey.” This first appears in God’s conversation with Moses in the presence of the burning bush.

David and his people receive honey (among other foods) while surviving in the wilderness and hiding from Saul. Jeroboam’s wife takes cake, loaves, and a jar of honey on her travels. Honey is even part of the tithe. A recent excavation in northern Israel revealed a 3,000-year-old beekeeping operation dating back to the time of King David. Some scholars had argued that the Israelites made honey exclusively from figs and dates, but such archaeological finds confirm that beekeeping is an ancient practice.

The first time honey is mentioned in the Bible is in the story of Joseph. After his adventures — which include being thrown in a pit by his brothers, doing time in jail for a crime he didn’t commit, and spending years in slavery — he finally rises to the position he has been destined for all along: he is ruling over the land of Egypt. When he sees his brothers after decades, he keeps his identity hidden and sends them back to get the missing brother, Benjamin. When Joseph’s father, Israel, hears of the ruler’s demand, he tells his sons to pack their bags with the best offerings of the land as gifts to appease the ruler. These include spices, pistachio nuts, almonds, silver, and honey.

Thus, the first time honey is mentioned, it’s part of a gift to win favor. Israel instructed his sons to take “a little,” possibly signifying the specialness of the honey.

God promised to bring His people out of Egypt into

a good and spacious land, to a land flowing with milk and honey.

The promise of a “good” land highlights the land’s fertility, while the promise of a “spacious” land offers a sharp contrast to the tight living quarters the Israelites had experienced under the oppression of the Egyptians. The promise that the land would overflow with “milk” suggests abundant pastureland for goats and cows, while the mention of “honey” implies that the land was abounding in flowers and grass. Such a detailed portrait of a promise reveals something about the outrageously generous heart of God. He didn’t just want to end slavery for His people. He wanted to bring them out of the land entirely and into a new place that overflowed with provision.

Even on their way to the Promised Land, during that difficult time in the desert, God gave His people a taste of the better things that were to come. He provides sweet manna for them. This heaven-sent food has been compared to coriander seed and is described as tasting like wafers with honey.

When the Israelites finally arrived at the border of Canaan, they sent spies to evaluate the situation. The scouts confirmed the abundance of the land by noting that it flowed with milk and honey. This observation became one of the Promised Land’s defining characteristics, even though the land could have had other descriptions. According to Deuteronomy 8:7-9 and Deuteronomy 11:10-12, the land also boasted produce, including wheat, barley, pomegranates, fig trees, vines, and oil. So why did milk and honey become the trademark description of the Promised Land?

Some scholars suggest that milk was one of the most important staples in the Hebrew diet next to bread. Any land that boasted excess milk and honey had to maintain extensive pastures, which meant plenty of water as well — important when you’ve spent time in the desert. Or perhaps honey was viewed as a luxury, and thus a land with milk and honey could meet both one’s needs and desires. Some scholars suggest “milk and honey” may be an example of Hebrew merism — the literary use of opposites to cover the spectrum of everything in between — reminding the Israelites that the Promised Land contains absolutely everything in abundance.

I read God’s promise of this overflowing land aloud to Gary [the beekeeper]. He held up his hand in protest.

“You know I’m not a theologian,” he said.

I assured Gary that I wanted his perspective as a beekeeper, and his posture relaxed.

“Well, then,” he paused, “speaking just as a beekeeper, a land overflowing with honey is naturally bountiful, a land that’s got everything you need and then some.”

He explained that in ideal conditions, a hive of bees will collectively travel as far as 55,000 miles and tap more than two million flowers to make one pound of honey. A productive hive can make up to two pounds of honey in a single day. Many natural factors affect the bees’ ability to make honey, including the amount of seasonal rain, the variety and abundance of vegetation, and the type and frequency of weather patterns. To Gary, the mention of honey meant all these things had to be in place, a perfect gathering of good things in the land.

“You do what you can to protect the hives and give the bees the best possible chance for a good year, but in the end, God is the one behind the control panel,” he observed.

Gary was not just a man of faith, but a man who had held on to his faith in all the rollercoaster ups and downs of beekeeping: the years of battling disease among the hives, the years with too much rain or not enough, the years when the flowers blossomed in wild abundance and those when buds grew scarce. The yield of his honey had been affected by everything from drought to heat waves, late to early snow, and even changes in native plant life. For Gary’s land to overflow with honey, the right conditions had to align perfectly.

That’s why the detail of the Promised Land overflowing with honey was so important: God promised His people a land where everything was in top working order. This was a land abounding in fruitful pastures and efflorescent vegetation. This was a land functioning in its proper, God-designed rhythms. The result was natural abundance.

The description “overflowing with honey” offers a glimpse into what God desires and promises us all — an invitation for us to taste and see that the Lord is good.

Are you holding on in all the rollercoaster ups and downs of life? Maybe it’s been more of a battle recently and you’ve faced hardships of your own making and things out of your control. God is still at the control panel. He’s righting the conditions to align perfectly for good. Come share your thoughts about the reflection of the divine in bees on our blog! We want to hear from you! ~ Devotionals Daily