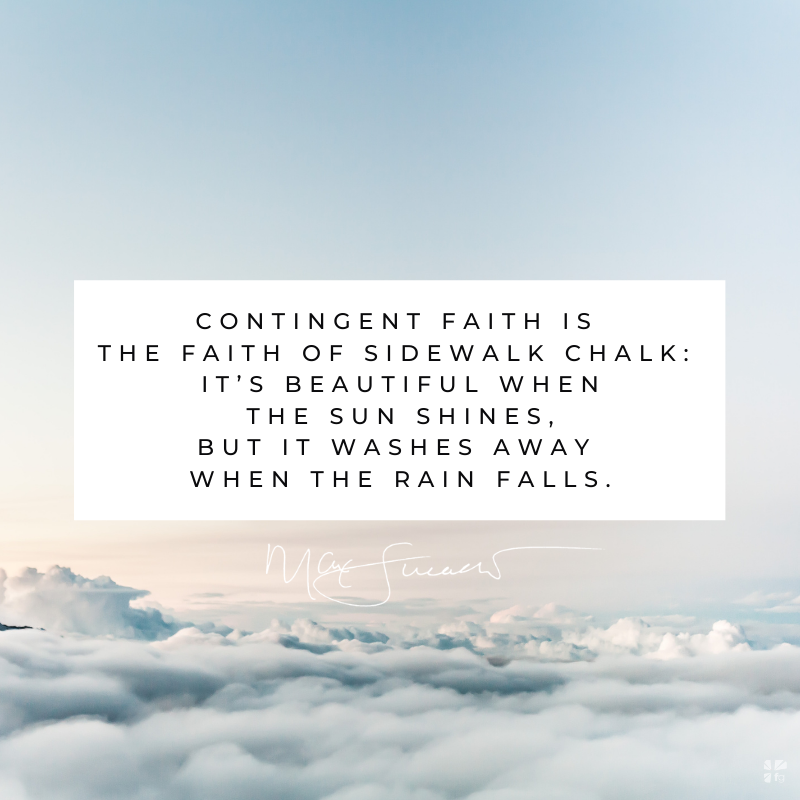 Do you know the road? How it grows dark with doubts? How despair tags along as an uninvited companion? If you can relate, you’ll find this story inspiring.

As He traveled through Galilee, [Jesus] came to Cana, where He had turned the water into wine. There was a government official in nearby Capernaum whose son was very sick. When he heard that Jesus had come from Judea to Galilee, he went and begged Jesus to come to Capernaum to heal his son, who was about to die. (John 4:46-47 NLT)

The father was a man of high standing in the court of Herod. He was likely a Gentile. His modern-day counterpart might be a White House chief of staff or a presidential cabinet member. He held a position of status and oversaw a houseful of servants. But none of that mattered, for he had a son who was very sick. The son was a child, just a lad (John 4:49). No doubt the prominent aristocrat had summoned the finest physicians to help his boy. But no one could. His son still teetered on the brink of death. The dollar is not almighty. Neither rank nor riches can protect their possessors from disease and death. Certainly, this father would have given both to see health return to his son.

He lived in Capernaum, a fishing village that served as the base of operations for Jesus. Peter had a home there. Jesus was known to speak in its synagogue. It’s not hard to imagine a villager suggesting to the distraught father, “Ask the Nazarene to help your son. He has healing power.” Jesus was well-known in Capernaum.

Jesus, however, was eighteen miles away in the village of Cana.1

The official set out. He gave his son’s fevered brow a kiss and his anxious wife a promise and then headed northeast around the Sea of Galilee. The trek required food, planning, and a protection detail. A predawn departure would get him to Cana by sundown. If he left at midday, he would have spent the night in an inn or taken up lodging in a borrowed room. Either way, he could not enjoy the walk, stop to see the sights, or visit with anyone along the path. By the time he spotted Jesus in Cana, the official was no doubt weary and worried.

He went and begged Jesus to come to Capernaum to heal his son, who was about to die. — John 4:47 NLT

Straightforward was this request. Urgent. He didn’t mention his position, rank, or title. He didn’t promise to make a financial contribution to the cause of Christ. He didn’t imply he was worthy of divine assistance. He came to Christ as a desperate father. He begged Jesus to come to Capernaum. I envision the man on his knees, perhaps his face on the ground, imploring Jesus to return with him and heal his son. He not only had a request; he also had a plan of action. In his mind the two would walk side by side from Cana to Capernaum until they stood next to the dying boy.

The response of Christ surprises us.

“Will you never believe in Me unless you see miraculous signs and wonders?” — John 4:48 NLT

Goodness gracious, I did not see this starchy question coming, did you? Only one miracle into John’s gospel we hear Jesus saying, “Be careful.” He waved a caution flag against a contingent faith, a faith that says I will believe if… or I will believe when…

What prompted this response? Perhaps the attitude of the villagers? They took note of the arriving official with an entourage in tow. They learned of his dying son and the plan to solicit the assistance of Jesus. They followed Him, not out of concern for the boy, but out of fascination with the miracles. This was Cana, after all. Word of the water-to-wine miracle was on the streets. Perhaps they were hoping to see another display of power. “Come on, Christ,” their presence suggested. “Show us what You can do.”

Or perhaps Jesus saw contingent faith in the request of the father. The man not only asked for help, but he also told Jesus the way the help should be administered. “Come to Capernaum and heal my son.” As a high-ranking official, he was accustomed to giving directives. He told subordinates what to do and how to do it. Was he doing the same with Jesus? Was his belief in Christ contingent upon the willingness of Christ to answer his prayer in a specific manner?

For whatever reason, Christ felt a warning was in order. In His first miracle Jesus rewarded the unconditional “whatever” faith of Mary. In this miracle He cautioned against the conditional faith of the people.

Contingent faith is the faith of sidewalk chalk: it’s beautiful when the sun shines, but it washes away when the rain falls.

The father did not reply to the caution. His heart was a dozen exits down the highway. He did not dispute the fact that some people demand miracles; he simply wanted to stay focused on the task at hand. “The official pleaded, ‘Lord, please come now before my little boy dies’” (John 4:49 NLT).

Such good news! Or was it? Jesus answered the man’s prayer — or did He? The nobleman had reason to rejoice, then again maybe not. The man asked Jesus to go with him to Capernaum. But Jesus told him, “Go back home. Your son will live.”

This was the moment of truth for the father, the moment he set out on the longest walk. The prayer was offered in Cana. Would the prayer be answered in Capernaum? He did not know. He had to make a choice.

Perhaps the nobleman turned on a dime and floated home on the magic carpet of faith. Maybe he high-fived his way down the path, shouting, “My dying son will live!” Perhaps he slept like a baby that night and awoke with joy the next morning. The sun was shining, the sky was blue, and he skipped and whistled all the way home to Capernaum.

If so, he was a better man than I am. I would’ve gulped at Jesus’ reply. I would’ve looked first at Christ, then at the road. First one way, then the next. “Are You sure, Jesus? Can’t You walk with me, Jesus? My wife is a good cook. I told her I would bring You. Won’t You please come with me?” What if he arrived in Capernaum and the son wasn’t better? What if the Messiah had moved on to another city before the father could find Him again? He made his choice. “The man took Jesus at His word and departed” (John 4:50 NIV). He believed in the spoken word of Christ.

While the man was on his way, some of his servants met him with the news that his son was alive and well. He asked them when the boy had begun to get better, and they replied, “Yesterday afternoon at one o’clock his fever suddenly disappeared!” Then the father realized that that was the very time Jesus had told him, “Your son will live.” And he and his entire household believed in Jesus. This was the second miraculous sign Jesus did in Galilee after coming from Judea. (John 4:51-54 NLT)

The good news from the servants was met with a good question from the father: What time did he get better? Reply: one o’clock. The very time Jesus had spoken the word. Jesus had worked a long-distance healing. The miracle was not just in the life of the boy but in the saving faith of the entire household. Isn’t that what Jesus desired? The physical healing was an unspeakable gift, for sure…  The life-giving miracle of Jesus was short-term. The faith-giving miracle of Jesus was eternal. The household believed in Jesus. This belief resulted in everlasting life.

Excerpted with permission from You Are Never Alone by Max Lucado, copyright Max Lucado.

What about you? Do you find yourself somewhere between Cana and Capernaum? Like the official you offered a heartfelt prayer. You begged Jesus for help. And like the official you didn’t receive the answer in the way you wanted. Consequently, here you are, doing your best to place one foot in front of the other, walking the path of obedience. Come share on our blog!