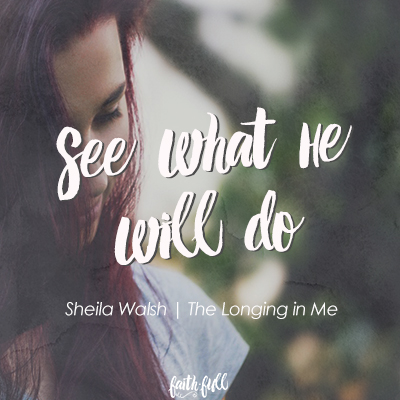 Control is a big issue for women.

Part of it is birthed in a healthy place. We want to fashion our homes into peaceful places. We want to protect our children. We want them to know they’re loved, and from that solid foundation, make good choices. If we’re married, we want our husbands to succeed and feel fulfilled. We want our families and friends to love and serve God. These are all good things. But what happens when those around us don’t cooperate with our efforts to control? Control moves from a healthy place to a manipulative and potentially destructive act.

What do you do when people don’t act right? Seriously, think about it for a moment. How do you deal with these out-of-control situations in your life when they crop up? The above may not be the examples you relate to, but you know what your control points are.

When we long for control, we choose one of the following.

“The only reason I’m upset is that I don’t believe this is what the Lord wants!”

“I’ve prayed about this for a while, and I just don’t have any peace about it.”

“It’s God’s will that all my family would be in church together.”

Feel free to add the rest…

“If you can’t get better than a B in Math, then I don’t think you need to see your friends this weekend.”

Perhaps worst of all, we withdraw:

“You hurt my feelings, and until you realize what you did, I don’t want to be around you.”

“I’m not coming to your baseball game. I’m staying home.”

It’s easy to feel quite righteous about withdrawal because we’re not yelling or screaming; we’re just not “there.”

Me? My weapon of choice was withdrawal. I didn’t realize it then, but the more I withdrew in one situation, the more I found withdrawal spilling into other relationships and situations too. When you slam a door inside your soul to keep yourself safe, you find yourself desperately alone. You’d think it would be hard to be on national television every day or on platforms at night and hold yourself back from people, but it’s actually disturbingly easy.

There is only one cure for this devastating sickness of the soul. It’s a radical surrender of everything you are and have, everything you love and hold dear, to the sovereign control of God. That’s not easy to do or even tempting, unless you are utterly convinced that God is good and He is for you. It’s taken me a long time to come to the place where I’m no longer driven to try to grab control when I feel afraid. I had to see a lot of life rise and fall. I had to face threats that didn’t seem empty. If you are as broken as I was and someone you once trusted looks right at you and says, “I will destroy you,” those words ring true and fill you with terror.

Mostly I had to fall on my face before God and stay there for a long time and let God do what only He can do.

“Listen carefully,” Jesus said. “Unless a grain of wheat is buried in the ground, dead to the world, it is never any more than a grain of wheat. But if it is buried, it sprouts and reproduces itself many times over. In the same way, anyone who holds on to life just as it is destroys that life. But if you let it go, reckless in your love, you’ll have it forever, real and eternal.” — John 12:24–25 The Message

As my (first) marriage began to crumble, the threats from John became more acute. In retrospect I understand that when you are hurting you can say things that you don’t mean, but that didn’t lessen the pain at the time. He made it clear to me that he had the power to destroy my ministry and my music career. I’d just finished a new Christmas CD, and my vocals were taken off and the tracks given to another artist. That was just the first of many blows that left me reeling.

When someone threatens to tar and feather your name, you have two choices.

1. You can try to fight back, which will rip you both to pieces.

2. You can give up your attempts at control, let the person do his or her worst, and see what God will do.

Have you ever found yourself in a place like that, where you believe the whole world is against you? When we feel helpless, it’s so tempting to want to attach blame and suspect even the one who is most trustworthy in your circle. The enemy of God would love for you to wallow in that place. He’d love to isolate you and make you believe that everyone is talking about you and no one is your true friend. He loves to see us paranoid.

A friend of mine told me that when she was younger she didn’t speak to one of her friends for twenty years because she believed that she’d said something very damaging to her reputation. She was so devastated that instead of facing her and asking if those words were true, she just cut her off. It hurt both of them because neither left the relationship alone — they took friends with them. When they reconciled later, they both had deep regret for such a waste of years.

We can’t live like that anymore, girls. We are daughters of the King. We have to hold ourselves to a different standard than our culture adheres to or even the standard of those within the church who live carelessly, forgetting who they truly are. Christ has called us to be people who speak the truth and live in the light, who openly settle our conflicts rather than withdraw and embitter ourselves. More than that, we need to come to a place where we decide this question once and for all: Do we believe that no matter what appears to be happening all around us, God is in control? Unless we believe that deep enough to impact the hardest moments in life, we will allow the enemy to make us crazy.

Can you bring what feels so out of control to God, knowing He is good and He loves you, and trust Him with the timing?

We long for peace but we often grab control because it makes us feel that we are doing something. The truth is that the only place where true peace is found is in Christ, the Prince of Peace.

Watch the Video for The Longing in Me

Excerpted with permission from The Longing in Me: How Everything You Crave Leads To The Heart Of God by Sheila Walsh, copyright Sheila Walsh.

Control. Is there anything harder to release from our grasping hands? I’ve waged war with the issue of control in my own life and yet I still have to tell my heart to “let it go” and allow God to be fully in charge, especially when wrong is done to me. Does that sound familiar? Come share your thoughts about the longing for control on our blog. We want to hear from you! ~ Laurie McClure, Faith.Full