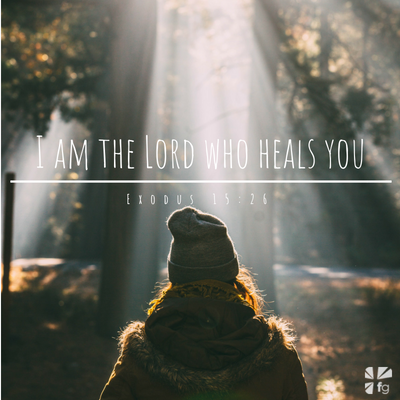 The Lord Who Heals

The Hebrew word rophe means “heal, “cure,” “restore,” or “make whole.” Shortly after his people left Egypt for the Promised Land, God revealed himself as Yahweh Rophe, “the Lord who heals.” The Hebrew Scriptures indicate that God is the source of all healing. As you pray to Yahweh Rophe, ask Him to search your heart. Take time to let Him show you what it contains. If He uncovers any sin, ask for His forgiveness and then pray for healing. The New Testament reveals Jesus as the Great Physician, the healer of body and soul, whose miracles point to the kingdom of God.

If you diligently heed the voice of the Lord your God and do what is right in His sight, give ear to His commandments and keep all His statues, I will put none of the diseases on you which I have brought on the Egyptians. For I am the Lord who heals you. – Exodus 15:26 NKJV

Then Miriam the prophetess, the sister of Aaron, took the timbrel in her hand; and all the women went out after her with timbrels and with dances. And Miriam answered them:

“Sing to the Lord,

For He has triumphed gloriously!

The Horse and its rider

He has thrown into the sea!”

So Moses brought Israel from the Red Sea; then they went out  into the Wilderness of Shur. And they went three days in the wilderness and found no water. Now when they came to Marah, they could not drink the waters of Marah, for they were bitter. Therefore the name of it was called Marah [meaning bitter]. And the people complained against Moses, saying, “What shall we drink?” So he cried out to the Lord and the Lord showed him a tree. When he cast it into the waters, the waters were made sweet.

There He made a statute and an ordinance for them, and there He tested them, and said, “If you diligently heed the voice of the Lord your God and do what is right in His sight, give ear to His commandments and keep all His statutes, I will put none of the diseases on you which I have brought on the Egyptians. For I am the Lord who heals you.” – Exodus 15:20-27 NKJV

Yahweh Rophe, I bow before You today to acknowledge that You are not only my Creator but the Lord who heals me. Please heal me today, body and soul, and do the same for my loved ones. I pray that You will heal whatever is bitter in our lives, transforming us in ways that glorify You. Amen.

The verb from which Rophe is derived occurs sixty-seven times in the Old Testament. Though it often refers to physical healing, it usually has a larger meaning as well, involving the entire person. Rather than merely healing the body, Yahweh Rophe (yah-WEH ro-FEH) heals the mind and soul as well. This Hebrew verb is also used in other ways — for example, God “heals” water, land, and nations, and he “repairs” an altar. Significantly, God also heals sin and apostasy. The Hebrew Scriptures, in fact, link sickness and sin by presenting sin as the cause of illness just as it is the cause of death. In the New Testament, the corresponding Greek word is iaomai and it can refer to deliverance from death, demons, sickness, and sin.

Jesus, the great healer, clearly indicated that sickness is not necessarily caused by sin on the part of the person who is ill. Rather, it can result from living in a sinful, fallen world.

If you diligently heed the voice of the Lord your God and do what is right in His sight, give ear to His commandments and keep all His statutes, I will put none of the diseases on you which I have brought on the Egyptians. For I am the Lord who heals you. – Exodus 15:26 NKJV

Anyone the man with a discharge touches without rinsing his hands with water must wash his clothes and bathe with water, and he will be unclean till evening. – Leviticus 15:11

Praise God: For His great wisdom.

Offer Thanks: That His laws are designed not to harm us but to protect us.

Confess: Any sin that has entered your life through breaking God’s commandments.

Ask God: To help you see the link between obedience and health, physical and spiritual.

Ancient medical knowledge was limited not only by the lack of scientific method but also by the widespread worship of idols and the belief in magic. Disease was often blamed on the presence of evil spirits, who could only be vanquished by magical potions and powerful incantations. Egyptian papyri dating to 1552 b.c. list medical remedies containing a strange array of ingredients, including “lizards’ blood, swine’s teeth, putrid meat, stinking fat, moisture from pigs’ ears, milk, goose grease, asses’ hoofs, animal fats from various sources, excreta from animals, including human beings, donkeys, antelopes, dogs, cats, and even flies.” Clearly this was a case of the cure being worse than the cold.

Rather than relying on a witches’ brew of potions to heal them, the Israelites were to obey God’s commandments and statutes, some of which contained instructions that foreshadow modern medical discoveries. For instance, people were to wash their bodies and their clothes if they came into contact with a disease, a bodily discharge, or a corpse. This hardly sounds like rocket science unless you realize that as recently as 150 years ago, it was considered ridiculous for a surgeon to have to wash his hands prior to operating on a patient. The Israelites also practiced isolation and quarantine and followed dietary laws that prevented the spread of disease.

One of the ways God lived up to the self-disclosed name Yahweh Rophe was in providing His people with instructions that prevented them from becoming ill in the first place. Some scholars suggest that it was their obedience to dietary and sanitary laws that enabled the Jews to survive the various diseases that wiped out many other ancient peoples.

Likewise the moral law, as embodied in the Ten Commandments, offered similar protection. Those who disregarded it would suffer from spiritual diseases that could in turn result in physical illnesses.

Despite the sophistication of modern medical knowledge, many cures still elude us. If you or someone you love is suffering from a spiritual or physical malady, seek the Lord today for grace and wisdom, remembering always that he is “the Lord who heals you.”

Do you need healing today? Let’s pray to Jesus, our Great Physician, the healer of body and soul, whose miracles point to the kingdom of God. Come share your prayer with us on our blog. We want to hear from you! ~ Devotionals Daily