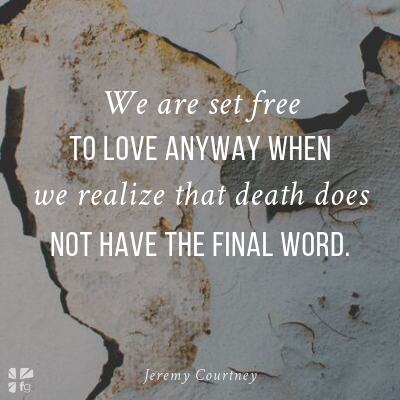 Editor’s Note: More than a decade ago, at the height of the Iraq War, Jeremy Courtney and his wife Jessica Courtney chose to move to Iraq. Rather than turn away from chaos and conflict, they made an incredibly difficult decision to lean in and love anyway. They would go on to found the Preemptive Love Coalition, an international relief organization engaging on the front lines of the world’s most polarizing conflicts in Iraq and Syria. In his book Love Anyway, Jeremy recounts a journey not for the faint of heart, as he and his family routinely found themselves face-to-face with the worst that violence and terrorism had to offer, leading to many traumatic experiences and frequent crises of faith. In today’s feature, Jeremy recounts coming to grips with the aftermath of an attack by ISIS. Through it all, he maintains that there exists a “More Beautiful World Our Hearts Know Is Possible” and that we can start to see it when we become bold enough to truly love our neighbors and truly love our enemies.

This town of ninety thousand people had once been home to Muslims, Christians, and Yazidis. So the entire scene undermined much of what I’d always believed to be true about peace: if only we were exposed to one another, if only we saw each other and knew each other, we would love each other and all would be well. But Christ the King Church at the top of the hill had been badly damaged, and our Yazidi friends told story after story of their longtime Muslim friends threatening them, turning on them, and ultimately collaborating with ISIS to commit violence against them.

Still, these weren’t Christians murdered en masse, lying facedown in the dirt. The Christians across this conflict had been mostly allowed to leave, respected as “people of the book.” The Yazidis had no such protection.

I’d seen all the photos. I’d watched all the videos. I’d heard all the stories. But standing on the edge of this crime scene, which was just one of hundreds, I was scared.

[Our guide] Murad pointed to the horizon toward the villages ISIS still occupied. But it wasn’t the thought that terror was going to befall us any minute that had me scared. I was scared I had been wrong about this whole thing. Scared that telling people to love anyway could have such devastating consequences if I dared say it to the victims themselves. As these men had been rounded up and murdered, their daughters and wives had been abducted and were even now being held as slaves in the village on the horizon.

If I met one of those girls, would I tell her just to “love anyway”? Of course not! So how do I get off saying it to anyone? Why do I even believe this is true?

I felt overcome with sorrow. This wasn’t how it was supposed to be. Preemptive love — the idea, the way of life —  ‘

And then, like a scene from a movie, the background music transitioned from tension to hope. As I stared at the dirt, I suddenly noticed a single yellow wildflower poking through the bones in front of me. Above, a ray of sunshine pierced the clouds like a French horn announcing that the tide had turned.

When I looked up, I saw that the entire field for miles in every direction was covered in bright yellow flowers. My shoes, my pants, and the tail of my denim shirt with the rip in the elbow were covered in pollen from our walk to this mass grave.

In the face of death unlike anything I’d ever seen, I was covered with the dust of new life. To say “life goes on” is one thing. Yes, winter always gives way to spring. But this spoke deeper. Life was literally pushing up through the hollow of [a] skull where [a] man’s final thoughts of his family had been formed.

I thought of his wife and children.

His scruffy cheeks, his baby’s sloppy kisses, his memories of his wife, his dirty fingernails from changing the motor oil, and the love she cooked into that last supper — they all dissolved here and folded into the land beneath these bones.

The summer winds blew, and the winter rains came and carried that soil, fertilized with so much pain and blood and love, across the field, until winter waned and new life came.

The chorus of sunbright flowers sang more than the stoic song of “Life Goes On.” Each flower carried within it a ringing note of promise. I was reminded: life cannot be extinguished. Not really. All that energy, all that love, has to go somewhere.

Back in the village, ISIS had drawn a tree on the side of a house and captioned it with an apocalyptic warning: “The tree of the Islamic State is watered by the blood of its own martyrs.” But ISIS didn’t go far enough in their understanding of how life emerges from death.

They got it right that life is fueled by composted pain and suffering that comes before it. But they failed to realize that there was power in the blood of their victims as well.

The field of death and life I stood in carried with it the possibility that the blood spilled and the slobbery kisses on daddy’s cheeks and the pain and the dashed promises might yet give rise to something new. The good and the bad were itself the soil now. The pain was the womb, which meant the past wouldn’t be wasted or wiped away. Instead, it would be included. And not only included — it would be the passageway to new life.

Yes, life goes on, but a life of preemptive love is about more than stoically putting one foot in front of the other. We are set free to love anyway when we realize that death does not have the final word.

I used to believe I was most alive when I was far from death. But now I get it — life and death are not opposites. That kind of thinking only shackles us in fear. Nobody bypasses the grave. So it’s actually the choice to die before we die that removes fear from the driver’s seat and makes us most alive to live.

Watch the video to learn more…

Love your enemies, do good to those who hate you, bless those who curse you, pray for those who mistreat you. If someone slaps you on one cheek, turn to them the other also. If someone takes your coat, do not withhold your shirt from them. — Luke 6:27-29

You may never have witnessed the kind of tragedy Jeremy describes, but we’ve all witnessed the effects of hate and terrorism and sin in our world. How does the call to love your enemies, to love anyway stir you in new ways? We’d love to hear your thoughts in the comments!

In an increasingly divided world, a new insurgence is erupting. It’s creating a movement of people who will not accept that darkness is our future. Jeremy Courtney is on the front line of this movement and in this book shows us what it means to not only believe in a better tomorrow but to actually build it.
— Donald Miller, author of Blue Like Jazz