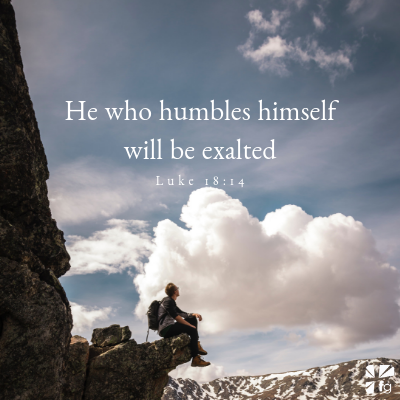 Now they came to Jericho. As He went out of Jericho with His disciples and a great multitude, blind Bartimaeus, the son of Timaeus, sat by the road begging. And when he heard that it was Jesus of Nazareth, he began to cry out and say, “Jesus, Son of David, have mercy on me!”

Then many warned him to be quiet; but he cried out all the more, “Son of David, have mercy on me!”

So Jesus stood still and commanded him to be called.

Then they called the blind man, saying to him, “Be of good cheer. Rise, He is calling you.”

And throwing aside his garment, he rose and came to Jesus.

So Jesus answered and said to him, “What do you want Me to do for you?”

The blind man said to Him, “Rabboni, that I may receive my sight.”

Then Jesus said to him, “Go your way; your faith has made you well.” And immediately he received his sight and followed Jesus on the road. — Mark 10:46-52

In the 1980 comedy The Gods Must Be Crazy, a traveling bushman creates a monkey trap. He digs a hole in a termite mound, while a baboon watches from a distance. The hole is large enough for the animal to stick his hand through but too small for him to pull out his clenched fist. The bushman then places melon seeds inside and waits.

After a while the monkey’s curiosity gets the best of him. He goes to the mound and reaches in to pull out the seeds. But he cannot get his arm out of the hole, because he will not let go of the seeds. As the baboon struggles to remove his fist from the hole, the bushman puts a rope around its neck. The monkey was only willing to let go of the seeds after it was too late. This comedy illustrates how we can become trapped by things we should let go of much more quickly in life.

The Church of the Nativity in Bethlehem is also revealing. It was built over the traditional birthplace of Jesus. It has a tiny door, called the Door of Humility. To enter, worshippers must stoop down. There is a legend the doorframe was built this way to ensure that everyone who enters will bow before they enter the holy place.

We all have opportunities to encounter God, but the greatest opportunities tend to require us to exhibit high levels of humility before we can fully experience them.

The more we refuse to bow from our hearts, the more we bump our heads against the wall until we do.

In the verses that follow, we are going to watch a blind man avoid both the monkey trap and skillfully navigate through the tiny door. He was not a studied theologian, priest, prophet, or even a disciple, yet the Bible says this about Bartimaeus: So Jesus stood still and commanded him to be called. What is so amazing in this story is not that this man cried out to Jesus for help; that is what we expect beggars to do. What’s mind blowing is the fact that Jesus stopped for him.

Now they came to Jericho.

This happened in the vicinity of the famed city whose impregnable walls once stood roughly eighty feet high and six feet wide. More than a thousand years earlier, Joshua — Moses’ successor and the commander of God’s army — had caused those walls to come tumbling down.

Now, as Jesus again walked through Jericho, walls again would come down, but these walls were not made of stone. These walls were far more stubborn. They were in the hearts and minds of the people following Jesus.

Jesus had served the people of Israel for about three and a half years. The air was thick with the excitement of revolutionary ideas. Words were spoken and miracles were performed, and the multitudes would never be going back to religion as usual. A major paradigm shift was occurring in popular thinking, all due to the controversial carpenter from Galilee.

Jesus departed Jericho with a growing entourage of curiosity seekers and followers. He was preparing for His final entry into Jerusalem. Death loomed less than two weeks away. His disciples opposed and could not fully comprehend His statements predicting the cross He soon would be nailed to (Matthew 16:22; Luke 18:34). Their deep desire to see the full, immediate manifestation of the global kingdom of God almost completely blurred their lenses — until after the resurrection. Jesus felt more and more alone in His understanding of His mission, particularly as it neared its end.

Countless self-consuming thoughts would have filled a lesser mind. Instead, in His characteristic and radical unselfishness, Jesus stopped for a final man before reaching Jerusalem. This would be the last healing He would perform before His final entry into the city to face the cross. The last words and deeds of a person reveal a lot about that person’s true priorities.

Blind Bartimaeus, the son of Timaeus

At this point we are introduced to a blind beggar named Bartimaeus. Most people would have ignored this man. He was one of the many thousands of needy, destitute people who constantly roamed the streets. After all, Jesus had already done so much. He had nothing else to prove to the crowd by stopping. Conventional thinking would advise Him to reserve His strength for the confrontation that lay ahead.

To capture the spirit of the encounter, the inspired gospel writer went further. He lets us know this man was not viewed by Jesus as just another statistic. He was someone’s child, “the son of Timaeus.” Everyone comes from somewhere. We each have a story and are fighting lifelong battles that few others fully understand.

Sat by the road begging.

Bartimaeus was not on the sidelines because he was unwilling to work but because of his inability to see. A lack of vision will impact your life more than you can imagine!

And when he heard that it was Jesus of Nazareth, he began to cry out

Living off the charity of strangers was humiliating, an indignity Bartimaeus no longer wanted to bear. Although he was physically blind, his heart (spiritual vision) could see well enough to recognize God when He showed up. Helen Keller famously said, “The only thing worse than being blind is having sight but no vision.”2

Bartimaeus had heard that Jesus of Nazareth was passing by. The fact this man could not use his eyes did not stop him from using his voice. God always leaves us with something. Your feet may not work, but maybe your hands do. You may not have been born rich, but you were born able to work. You may not have had a lot of people ask you out, but you don’t need a lot, only the right one. We don’t always have all that we desire, but if we will work with what we have, we will be amazed at what we can do.

It is interesting to note that Bartimaeus called Jesus the Son of David. This was a messianic title taken from the Old Testament that foretold the kingdom that Jesus would initiate (2 Samuel 7:12-16). While Bartimaeus may not have had an extensive knowledge of God’s Word due to his blindness, he knew enough Scripture to recognize Jesus as the Son of David and the fulfillment of Old Testament prophecy. We don’t have to be scholars to recognize God. If by nature a sheep can distinguish and identify the voice of its shepherd, surely we have adequate innate wiring to recognize the voice of our Shepherd.

Then many warned him to be quiet

Obstacles are put in our paths to determine how much we want what’s on the other side of them. Bartimaeus had heard about the many things Jesus did. He was not going to let anything get in the way of his once-in-a-lifetime moment with Jesus. And you shouldn’t either!

The crowd did not think this beggar was worthy of Jesus’ time and attention. Some people may feel the same way about you and me. Bartimaeus did not fail at his tiny door. He was willing to face what- ever ridicule and humiliation were required to walk through his door to Jesus. Sometimes, we must starve and sacrifice our egos so Jesus can feed our souls.

Jesus told a story of two other men at the tiny door:

Two men went up to the temple to pray, one a Pharisee and the other a tax collector. The Pharisee stood and prayed thus with him- self, “God, I thank You that I am not like other men — extortioners, unjust, adulterers, or even as this tax collector. I fast twice a week; I give tithes of all that I possess.” And the tax collector, standing afar off, would not so much as raise his eyes to heaven, but beat his breast, saying, “God, be merciful to me a sinner!” I tell you, this man went down to his house justified rather than the other; for everyone who exalts himself will be humbled, and he who humbles himself will be exalted. —Luke 18:10-14

Martial artist and author Bohdi Sanders said, “Most would be horrified if they saw not their faces, but their true character, in the mirror every morning.”3

But he cried out all the more, “Son of David, have mercy on me!”

Blind Bartimaeus cried out to Jesus based on the Lord’s goodness, kindness, and mercy, not his own. He did not compare himself to anyone else to qualify for Jesus’ attention. Putting someone else down never makes you any taller. Start crying out to God based on His merits and not your own. Then watch Him do for you what He did for Bartimaeus.

Most people today would have given up and retreated back to the side of the road, saying to themselves, “I give up. Nobody understands me, nobody loves me, and everybody is out to get me.” Not Bartimaeus. He only yelled louder. If you fuel your journey with the opinions of others, you are going to run out of gas.4

So Jesus stood still and commanded him to be called.

Jesus was on His way to the most important event in human history, His Cross, and yet He stopped for this man. A poor, blind man armed with only heartfelt hope and faith made the Creator of the universe stop. The New Testament teaches that Jesus is the same yesterday, today, and forever (Hebrews 13:8). This means if He did it then, He will do it again!

Excerpted with permission from When God Stops by Derek Grier, copyright Derek Grier.

Do you think Jesus would stop for you? What if you called out to Him with your needs? And your lack? And your hope? If he stopped for Bart, he will stop for you! Come share your thoughts with us on our blog. We want to hear from you about stopping Jesus in His tracks! ~ Devotionals Daily