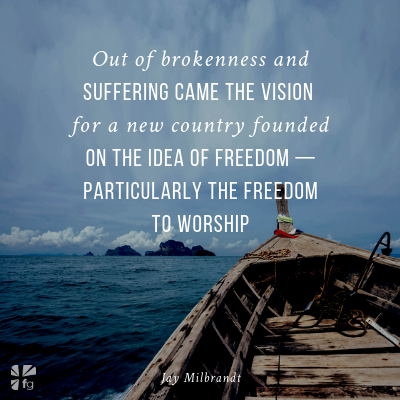 Editor’s note: Thanksgiving is fast-approaching. But how many of us really know the origin story of this holiday? According to author Jay Milbrandt, we’ve commercialized and sanitized the story into one that is more legend than truth.

He states, “I had simply glossed over the story until I traced my own lineage back to two of the Mayflower pilgrims. Then, I finally took the time to read the names and stories. What I found was messy. The men and women who came on the Mayflower came as religious refugees and indentured servants. Once they arrived, they barely survived. Famine and disease claimed nearly half of them. Of those who did last through the first winter, some lived history-changing lives, others were complicit in acts ranging from murder to prejudice and deceit. It was messy and broken. After uncovering this, I endeavored to tell the true, unvarnished story. When I put pen to paper, I found something spectacular. Out of brokenness and suffering came the vision for a new country founded on the idea of the freedom — particularly the freedom to worship. It took time, and patience.”

We hope you enjoy this excerpt from Milbrandt’s book They Came for Freedom: The Forgotten Epic Adventure of the Pilgrims.

Twenty- three thousand years before the Mayflower voyage, glaciers had formed Cape Cod’s curious landscape— a desolate and foreboding stretch of sand arcing more than fifty miles out into the Atlantic.1 The Cape resembled the shape of a bent arm adorned with a handlike hook at its tip. The hook formed a natural harbor where the Mayflower could anchor in much calmer waters.

By the time the Mayflower set its anchor in mid- November 1620, winter had nearly set in upon them.2 Time was now of the essence. From the deck of the Mayflower, they gazed upon the cape— an inhospitable stretch of vast, barren sand dunes. As unwelcoming as it may be, and as undesirable a place as it appeared to settle, the Cape was at hand. The Pilgrims knew almost nothing of the mainland except what they had read in Captain Smith’s books. They heard rumors of miles upon miles of virgin forest. They expected oaks, pines, and junipers that grew down to the water’s edge, holding back rich, black earth. They read about cedars and maples covering the hills, while swampy marshes made their homes in the valleys. The Cape looked nothing like what they had imagined.

The late season and precarious weather made them decidedly less fastidious about the land they would settle— they needed immediate emergency refuge. Perhaps the promises of Smith’s books existed somewhere in the New World, but not here on the Cape. The real- life vision of the New World before them felt as far away as Europe, but they had run out of time to search. The Pilgrims needed to go ashore.

On the deck of the Mayflower, the voyagers gathered in the cold November breeze. They assembled, not to celebrate their landing, but to settle long- churning disputes before anyone stepped off the boat. With “discontented and mutinous” speeches, men came forward to air grievances that had started while they tossed and turned on the Atlantic. The divide between the Separatists of Leiden and the Strangers of England had grown deeper. If this enterprise continued, they would need to reconcile.

A technical dilemma exacerbated the situation: the patent gave them settlement rights in Virginia to the south, not New England— their current location. If they settled in Virginia, as they had planned, then the Virginia Company patent controlled, establishing a prearranged government structure with ultimate authority resting in King James. Settling in New England, as appeared imminent, would leave them unbound by a patent and without an overriding government structure. Once they stepped off the Mayflower, their small band of voyagers became a rogue nation.

The Strangers flexed their muscles around this interpretation, threatening that once on shore, “they would use their own liberty, as none had power to command them.”3 Through the diplomacy of John Carver, they deliberated over their differences. All agreed that very little of the fall season remained and that they might expect difficulties over the winter. They had overheard the sailors saying that if the voyagers did not disembark soon, the captain might force them ashore so the Mayflower could return to England before winter.

In short order, they agreed to find a path to work together. In the absence of lawfully binding government authority, they determined to first establish an authority of their own creation. With many well- read leaders, they departed from contemporary European thinking. Unlike Europe, they would have no king, pope, or state church. They would have a government operating by the consent of the people.

They agreed, at least on paper, to pledge the colony’s allegiance to King James. For the safety of the colony, and particularly for the Puritans on board, they needed to appear as though they had not staged a rebellion against the Crown. Practically, as well, they all recognized their reliance, at least in principle, on the king’s patent.

Still on board the Mayflower, the Separatists and Strangers agreed to commit this new model of government to writing. On November 11, led by John Carver, they scrawled out a document: the Mayflower Compact.

IN THE NAME OF GOD, AMEN. We, whose names are underwritten, the Loyal Subjects of our dread Sovereign Lord King James, by the Grace of God, of Great Britain, France, and Ireland, King, Defender of the Faith, &c.

Having undertaken for the Glory of God, and Advancement of the Christian Faith, and the Honour of our King and Country, a Voyage to plant the first Colony in the northern Parts of Virginia; Do by these Presents, solemnly and mutually, in the Presence of God and one another, covenant and combine ourselves together into a civil Body Politick, for our better Ordering and Preservation, and Furtherance of the Ends aforesaid: And by Virtue hereof do enact, constitute, and frame, such just and equal Laws, Ordinances, Acts, Constitutions, and Officers, from time to time, as shall be thought most meet and convenient for the general Good of the Colony; unto which we promise all due Submission and Obedience. IN WITNESS whereof we have hereunto subscribed our names at Cape- Cod the eleventh of November, in the Reign of our Sovereign Lord King James, of England, France, and Ireland, the eighteenth, and of Scotland the fifty- fourth, Anno Domini; 1620.4

The Mayflower Compact was an experiment— born out of necessity, but an experiment no less. They needed a local government, and they needed to maintain the whole of their enterprise. For this experiment, they had no template— a government formed contractually by the consent of the governed was revolutionary. For much of the world, and England in particular, monarchy and feudalism reigned as the practiced form of rule. The Separatists and the Strangers had never seen, nor experienced, an official democratic process. Yet Carver and Brewster had studied the classics of literature and philosophy. The opportunity to thoughtfully craft a new approach for the New World excited them.

Excerpted with permission from They Came for Freedom: The Forgotten, Epic Adventure of the Pilgrims by Jay Milbrandt, copyright Jay Milbrandt.

1. Geologic History of Cape Cod, Massachusetts. United States Geological Survey, http://pubs.usgs.gov/gip/capecod/glacial .html.
2. November 11, 1620. There is some discrepancy about the date due to calendar differences. Could be November 20.
3. Bradford, Of Plymouth Plantation, 49.
4. Ibid., 49–50

How much do you know about the history of the Thanksgiving holiday? Does it inspire you to know that broken & messy people just like us were the ones God used to help bring the freedom to worship that we in the United States experience today? We’d love to hear your thoughts in the comments!

“C. S. Lewis spoke of the counsel of the past as ‘the clean sea breeze of the centuries.’ Jay Milbrandt turns us fully into those breezes with his stirring retelling of the Pilgrim story. How desperately we need both the historian’s craft and heroic tale found in these pages.” — Stephen Mansfield, New York Times bestselling author