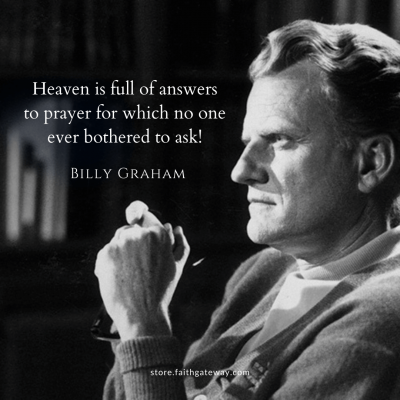 When we look for the supreme model of a person devoted to prayer, we need only to look at the life of our Lord. Jesus was constantly in an attitude of prayer, and never more urgently than in the face of suffering.

The night He was arrested, He was praying in the Garden of Gethsemane. He had taken His disciples with Him, but He Himself was so overwhelmed with what He knew lay before Him that He asked Peter, James, and John to stay and keep watch with Him. He Himself went still farther into the garden and fell on His face to the ground and prayed, “My Father, if it is possible, may this cup be taken from me. Yet not as I will, but as you will” (Matthew 26:39).

In those words Jesus taught us how to pray. Every time I pray for a sick person, a bereaved person, or a person in trouble, I always close by saying, “If it be Thy will.” While it is God’s will to save everyone who will repent of sin and receive His Son as Savior, it is not God’s will to deliver us from every adversity. As we have already seen, suffering often strengthens us, and as Christians we cannot claim exemption from all life’s ills.

Prayer was as natural as breathing for our Lord, and it should be the same for us. If prayer is an integral part of our lives, when a crisis comes we have already prepared those lines of communication.

In the beginning man was fashioned to live a life of prayer in fellowship with God and in humble dependence upon Him. When we pray we are fulfilling God’s purpose for our lives, realizing our spiritual potential. As someone has said, “Prayer is the highest use to which speech can be put.”

The British author, William Ernest Henley, wrote the poem, “Invictus,” which has been studied by high school students for generations and which expresses feelings that sound so noble:

It matters not how strait the gate,

How charged with punishments the scroll,

I am the master of my fate:

I am the captain of my soul.1

All this looks very brave on paper, but when death took Henley’s six-year-old daughter, Margaret, he was heartbroken and began to realize that he was not the master of his fate. When she neared death, his bravado completely disappeared.

This kind of an attitude cannot be the stance of the Christian in any situation, particularly in the face of suffering. We are not the masters of our fate, either as individuals or as a nation. How can people boast that they control their own destiny when they cannot solve the problems of war, racism, poverty, sickness, or suffering?

No Freedom Without God’s Help

The world is being carried along on a rushing torrent of events which are beyond man’s control. Armageddon seems to be approaching in one form or another. However, there is one power available to change the course of events and to support us in the great crises of life, and that is the power of prayer by God-fearing men and women.

Adapting the words of Benjamin Franklin at the Constitutional Convention: It is probable that a nation cannot survive in freedom without the aid of Almighty God. Yet today we have reached the point where God is largely ignored, and we regard prayer in national life as no more than a venerated tradition. We have no sense of coming earnestly and expectantly to God; we simply use prayer as a formality.

One of the most amazing things in all the Scriptures is how much time Jesus spent in prayer. He had only three years of public ministry, yet He was never too hurried to spend hours in prayer. He prayed before every difficult task and at every crisis in His ministry. He prayed with regularity. We may be sure that never a day began or closed on which He did not hold communion with His Father.

How haphazardly and carelessly, by contrast, do we pray. Snatches of memorized verses are hastily spoken in the morning; then we say good-bye to God for the rest of the day, until we rush through a few closing petitions at night.

This is not the prayer program that Jesus exemplified. He prayed long and repeatedly. It is recorded that He spent one entire night in prayer to God (Luke 6:12).

The Scripture says, “Pray without ceasing” (1 Thessalonians 5:17, KJV). This should be the motto of every true follower of Jesus Christ. Never stop praying, no matter how dark and hopeless your case may seem. Jesus taught us that we should keep on praying and never give up (Luke 18:1).

A woman once wrote to me that she had pleaded for ten years for the conversion of her husband, but that he was more hardened than ever. I advised her to continue to pray. Sometime later she wrote again saying that her husband was gloriously and miraculously converted in the eleventh year of her praying. Suppose she had stopped after only ten years?

Our Lord frequently prayed alone, separating Himself from every earthly distraction. I would strongly urge you to select a place — a room or corner in your home, place of work, or in your yard or garden — where alone you can regularly meet God.

As we observe the prayer life of Jesus, we notice the earnestness with which He prayed. The New Testament records that in Gethsemane, in the intensity of His supplication, He fell to the ground and agonized with God until His sweat became “like drops of blood” (Luke 22:44). What an example of “prayer in suffering” He is — and how He proves the promise that those who are suffering need to look to God even more earnestly.

So many are the lessons Jesus taught us about prayer that I cannot present them all in one chapter. However, one that we should especially remember during these days of prejudice, hate, and hostility is this. He tells us to “pray for those who persecute you” (Matthew 5:44). We are to plead for our enemies, asking God to lead them to Christ and for His sake to forgive them. Even those who persecute us are to be the objects of our prayers.

Jesus reinforced this teaching by His own example, as we have seen. In the first words He uttered from the cross after the nails had been hammered through His hands and feet, He began to intercede for His crucifiers, saying, “Father, forgive them, for they do not know what they are doing” (Luke 23:34). Jesus prayed for those who persecuted Him. What an example!

With God nothing is impossible. No task is too arduous, no problem too difficult, no burden is too heavy for His love. The future with all its uncertainties is fully known to Him, though hidden from us.

He understands how much affliction and sorrow you need in order that your soul may be purified and preserved for eternity. Turn to Him, and you can say with Job, “He knows the way that I take; when he has tested me, I will come forth as gold” (Job 23:10).

Jesus considered prayer more important than food, for the Bible says that hours before breakfast, “Very early in the morning, while it was still dark, Jesus got up, left the house and went off to a solitary place, where he prayed” (Mark 1:35).

To the Son of God, prayer was more important than the assembling and the healing of great throngs. The Bible says, “Crowds of people came to hear him and to be healed of their sicknesses. But Jesus often withdrew to lonely places and prayed” (Luke 5:15-16).

The precious hours of fellowship with His heavenly Father meant much more to our Savior than sleep, for the Bible says, “Jesus went out into the hills to pray, and spent the night praying to God” (Luke 6:12).

He prayed at funerals, and the dead were raised. He prayed over the five loaves and two fishes, and fed a multitude with a little boy’s lunch. In the contemplation of His imminent suffering on Calvary’s cross He prayed, “Not my will, but yours” (Luke 22:42), and a way was made whereby sinful man might approach a holy God.

Prayer, in the true sense, is not a futile cry of desperation born of fear and frustration. Many people pray only when they are under great stress, or in danger, or facing some crisis. I have been in airplanes when an engine died; then people started praying. I have flown through bad thunderstorms when people who may never have thought to pray before were praying all around me. I have talked to soldiers who told me that they never prayed until they were in the midst of battle. There seems to be an instinct in man to pray in times of danger.

Christian teachers down through the ages have urged the prominence that prayer should have in the lives of believers. Some anonymous wise man has said, “If Christians spent as much time praying as they do grumbling, they would soon have nothing to grumble about.”

Here are some thoughts on prayer.

In the morning, prayer is the key that opens to us the treasures of God’s mercies and blessings; in the evening, it is the key that shuts us up under His protection and safeguard.

“God’s way of answering the Christian’s prayer for more patience, experience, hope and love is often to put him into the furnace of affliction,” Richard Cecil (1748–1810).

“Our prayer and God’s mercy are like two buckets in a well; while the one ascends, the other descends,” Mark Hopkins, American educator (1802–1887).

My longtime friend, a great humanitarian missionary and man of prayer, Frank C. Laubach, said, “Prayer at its highest is a two-way conversation — and for me the most important is listening to God’s replies.”

If there are any tears shed in heaven, they will be over the fact that we prayed so little.

Heaven is full of answers to prayer for which no one ever bothered to ask!

Excerpted with permission from Who’s In Charge of a World That Suffers? By Billy Graham, copyright The Billy Graham Literary Trust.

Reflect on how you use Christ’s example as a road map for your prayer life. How does it change how you approach God? Come share on our blog!