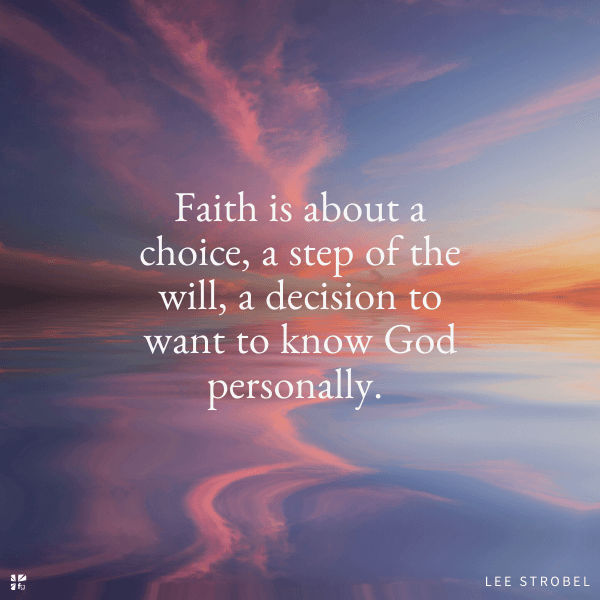 Now faith is confidence in what we hope for and assurance about what we do not see. — Hebrews 11:1

Debunking Christianity takes more than just trying to poke a hole in it by raising an objection. That’s because there’s a backdrop of other relevant evidence that creates a strong presumption in favor of faith in Jesus Christ. Simply examining individual challenges isn’t enough; this broad sweep of evidence must be kept in mind as each individual objection is weighed.

What kind of evidence? My interviews with experts elicited these persuasive facts that point powerfully toward the existence of God and his unique Son, Jesus Christ:

In addition, the 13 scholars and experts I interviewed for my book, The Case for Christ, established that the biographies of Jesus in the New Testament stand up to intellectual scrutiny, that they were reliably passed down to us through history, that there’s corroborating evidence for Jesus outside the Bible, that Jesus wasn’t psychologically imbalanced when he claimed he was God, and that he fulfilled all the attributes of deity.

Accounting for the Evidence

As Peter Kreeft conceded in our interview, the suffering in this world does constitute some evidence against the existence of God — but in the end it’s buried by an avalanche of other evidence that He does exist, that He does love us, and that He can even redeem our suffering and draw good from it. This mountain of evidence can give us confidence that even though we may not fully understand why there’s suffering or why hell exists, we can trust that God is just, that He is acting appropriately, and that someday we’ll have a deeper explanation.

When I was an atheist, I realized I would need to do more than merely raise random objections in order to cripple Christianity; I would have to come up with a nontheistic scenario that would better accommodate all of the facts that I’ve just listed. But atheism cannot credibly account for the big bang, the fine-tuning of the universe, the emergence of life, the existence of moral laws, the supernatural confirmation of the Bible, and the resurrection. The only hypothesis that explains them all is that there’s a divine creator whose unique Son is Jesus of Nazareth.

I had examined each obstacle on its own merits, interviewing experts who were able to provide satisfying explanations and analysis. Then I evaluated each of the objections in the context of the convincing evidence that Christianity is true and that therefore God is ultimately trustworthy and loves us deeply.

My conclusion is that Christianity emerged unscathed. After spending a year investigating “The Big Eight” objections detailed in my book The Case for Faith, I remained utterly convinced that the most rational and logical step people can take is to invest their faith in Jesus of Nazareth.

A Will to Believe

If I wanted to, I could continue to try to explain away the words of the experts I had interviewed, no matter how outlandish or nit-picky my arguments would eventually become. And believe me, my mind is quite capable of manufacturing all kinds of elaborate rebuttals, excuses, and counterarguments — even in the face of obvious truth.

Ultimately, though, faith isn’t about having perfect and complete answers to every single objection to Christianity. After all, we don’t demand that level of conclusive proof in any other area of life. The point is that we certainly do have sufficient evidence about God on which to act. And in the end, that’s the issue.

Faith is about a choice, a step of the will, a decision to want to know God personally.

It’s saying, “I believe. Please help me with my unbelief!” As Dallas Willard said, “It’s the person who wants to know God that God reveals Himself to.” Or as Lynn Anderson had told me, “When you scratch below the surface, there’s either a will to believe or there’s a will not to believe. That’s the core of it.”

I was thankful that I didn’t have to throw out my intellect to become a Christian. The positive evidence for Jesus being the unique Son of God and the convincing answers to “The Big Eight” objections cleared the way for me to take that step. But I did have to overcome my pride. I did have to drive a stake through the egoism and arrogance that threatened to hold me back. I did have to conquer the self-interest and self-adulation that were keeping my heart shut tight from God.

To apply Dallas Willard’s words to myself, the biggest issue was, “What did I want?” Did I want to know God personally—to experience release from guilt, to live the way I was designed to live, to pursue his purposes for my life, to tap into his power for daily living, to commune with him in this life and for eternity in the next? If so, there was plenty of evidence on which to base a rational decision to say yes to him.

Adapted from The Case for Faith: A Journalist Investigates the Toughest Objections to Christianity by Lee Strobel.

What do you make of Strobel’s conclusions? And how does it help you to know that the will to believe is really always what’s at the heart of the matter? We’d love to hear your thoughts in the comments!