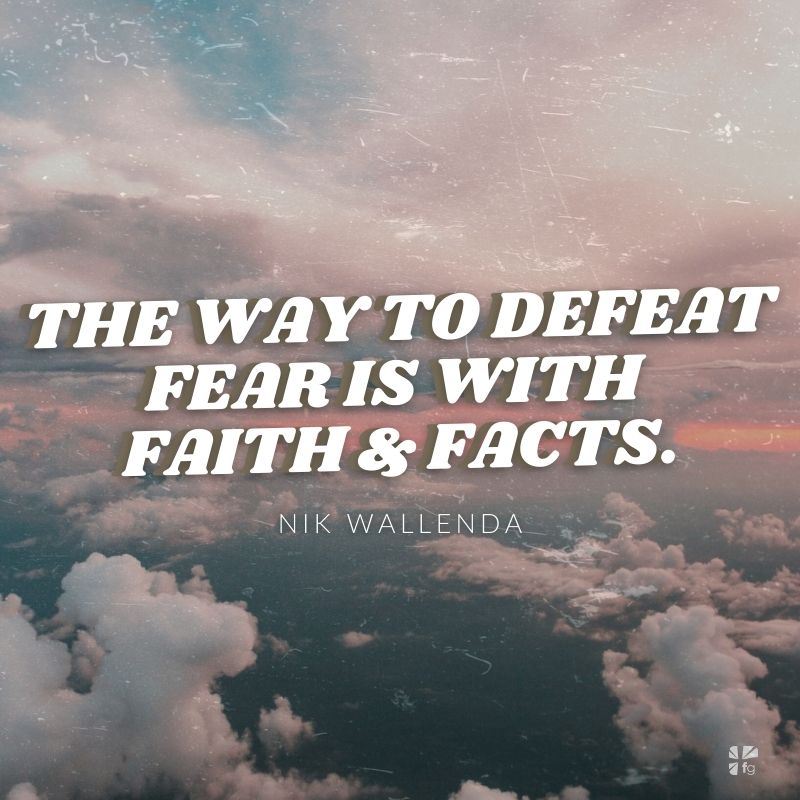 This is what the Lord says to you: ‘Do not be afraid or discouraged because of this vast army. For the battle is not yours, but God’s.’ — 2 Chronicles 20:15 NIV

One wrong step, and suddenly the world is upside down, spinning out of control, and before you know it, nothing is the same. That’s what happened to me. I put my foot on a wire as a part of a world-record-attempt eight-person pyramid… and we fell. Maybe you’ve had a terrible experience that caused you to fall, to question all that seemed stable in your life. Whatever your circumstances, we all face fear — fear that tells us we’re not good enough to do whatever we were made to do.

In our eight-person pyramid attempt and the tragic fall that occurred, injuring several of us (my sister Lijana very seriously), I was the among the three who didn’t fall to the ground. I hung helpless from the wire, seeing those who were scattered on the ground below, and I couldn’t control the madness of what was below me. That was where the seed of fear was planted in my heart.

I had always believed that many people were gripped by fear because they focused on fear; they focused on their issues or on their negative thinking, and it blotted out everything else. As a Christian, I knew that God went before me in all things, so I was always able to face life confidently. But now I struggled with controlling my thoughts.

When fear invades, there’s no pressing forward in faith or summoning of courage. There’s just the persistent, powerful fear that locks out the world.

I’ve walked both the pathway of faith and have been stopped in my tracks by paralyzing fear.

The Bible tells us that there’s the healthy experience of fear that helps us know the truth about our circumstances, and then there’s the unhealthy emotion of fear that is an obnoxious liar that tries to blind us to the truth (see Proverbs 1:7; John 6:20; Exodus 20:20). It is key to see facing fear as a spiritual battle to overcome the emotion of fear that holds us back from accomplishing what God has called us to do for his glory. The trauma of our accident forced me to face my fear in a new way. I couldn’t compartmentalize and hide it away or it would destroy who I was called to be and put the people around me in literal danger.

I continued to pray and seek God, but out of shame I hid my fear. The fall shook my faith as well as my confidence and forced me to reexamine both. I was experiencing a spiritual battle as much as a mental one, and I saw that Satan was trying to use shame to defeat me — I determined to conquer the Enemy who wanted to conquer me.

I had to surrender my fears to God and the truth that He is in control, and then I had to go to war within myself against the anxiety and cast out all of those fears.

Satan would love nothing more than for you and me to not fulfill what we’re made for.

I have found that the way to defeat fear is with faith and facts. Whatever your struggle, there is a solution available to you. It is grounded in the truth of God’s sovereignty, that He has a purpose that you’re meant to fulfill, that there’s always hope, and that combined with faith, each day is one step closer to a better day.

Are you battling fear? It’s a completely normal and human reaction to scary circumstances. But, we have to talk back to fear. Remember, there is always hope and God is sovereign in your situation. Come share your thoughts on defeating fear on our blog. We want to hear from you! ~ Devotionals Daily