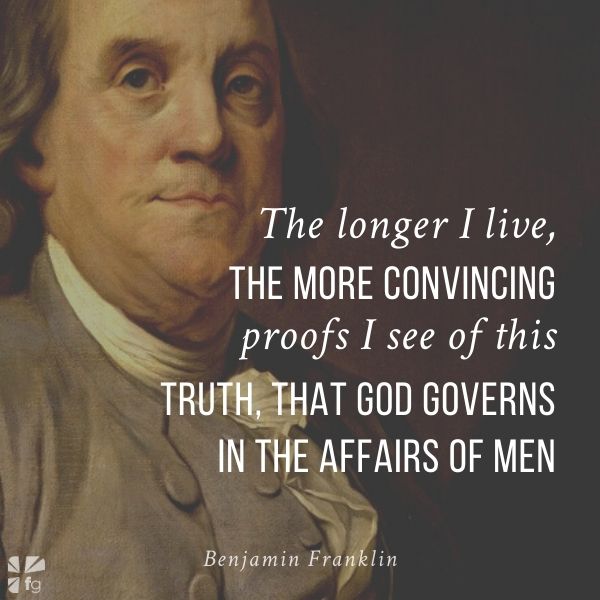 Unless the Lord builds the house, They labor in vain who build it. — Psalm 127:1

After the British surrender, the American Colonies had a nation but needed a constitution. The old Articles of Confederation were inadequate. In May 1787, delegates gathered in Philadelphia for a convention to draft a constitution that would establish an effective federal government. They appointed George Washington as chair, but that’s about all they agreed on. From the beginning, the delegates quarreled over deeply held disagreements as to the extent and form of the new government.

In this situation of this assembly, groping, as it were, in the dark to find political truth, and scarce able to distinguish it when presented to us, how has it happened, sir, that we have not hitherto once thought of humbly applying to the Father of Lights to illuminate our understandings? In the beginning of the contest with Britain, when we were sensible of danger, we had daily prayers in this room for the divine protection. Our prayers, sir, were heard — and they were graciously answered. All of us, who were engaged in the struggle, must have observed frequent instances of a superintending Providence in our favor. To that kind Providence we owe this happy opportunity of consulting in peace on the means of establishing our future national felicity. And have we now forgotten that powerful friend?… I have lived, sir, a long time; and the longer I live, the more convincing proofs I see of this truth, that God governs in the affairs of men! And if a sparrow cannot fall to the ground without His notice, is it probable that an empire can rise without His aid? We have been assured, sir, in the sacred writings, that “except the Lord build the house, they labor in vain that build it.”1

Ben Franklin was quoting here from Psalm 127. His entire remarkable speech, short as it was, was filled with biblical quotations and allusions, but this psalm was at the heart of what he wanted to say. Unless the Lord is in any enterprise, it has a limited future. Even building a house without His aid is perilous. Raising a family or a home without His strength is hazardous. Guarding a city without His blessings is futile. Working hard to gain wealth without putting Him first is vain.

How much more the establishing of a new nation, one unlike any ever seen on the earth. Surely such an undertaking requires the help of almighty God.

I firmly believe this; and I also believe, that without his concurring aid, we shall succeed in this political building no better than the builders of Babel: we shall be divided by our little partial local interests, our projects will be confounded, and we ourselves shall become a reproach… I therefore beg leave to move, that henceforth prayers, imploring the assistance of heaven, and its blessings on our deliberations, be held in this assembly every morning before we proceed to business; and that one or more of the clergy of the city be requested to officiate in that service.2

Even this motion failed because, perhaps, the convention had no money to hire a chaplain. But a few days later, on July 4, 1787, General Washington led the delegates to a prayer service at Philadelphia’s Reformed Calvinist Lutheran Church, where Rev. William Rogers offered these words:

As this is a period, O Lord, big with events, impenetrable by any human scrutiny, we fervently recommend to Thy Fatherly notice that august Body, assembled in this city, who compose our Federal Convention; will it please Thee, O Thou Eternal I AM, to favor them from day to day with Thy immediate presence; be Thou their wisdom and their strength! Enable them to devise such measures as may prove happily instrumental for healing all divisions and promoting the good of the great whole… that the United States of America may furnish the world with one example of a free and permanent government, which shall be the result of human and mutual deliberation, and which shall not, like all other governments, whether ancient or modern, spring out of mere chance or be established by force… We close this, our solemn address, by saying, as our Lord and Savior Jesus Christ hath taught us — Our Father, who art in Heaven … 3

The delegates joined in the Lord’s Prayer, then went back to work. Soon they had a document that began: “We the People of the United States, in Order to form a more perfect Union.”

James Madison, writing about the event later, said, “It is impossible for the man of pious reflection not to perceive in it a finger of that Almighty Hand, which has been so frequently and signally extended to our relief in the critical states of the revolution.”4

How do these prayers of the founding fathers of our country encourage you today? What are you undertaking in your life right now in which you need to look to God for strength? We’d love to hear your thoughts in the comments!