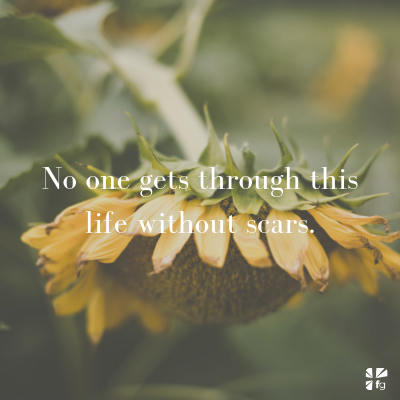 Our scars tell our stories. They are the mile markers of our existence, reminding us where we have been. Like chapter titles, they announce what has been written onto the pages of our lives. Even as they cover and hide our wounds, they reveal to all that we have suffered.

As with a block of marble, what has been taken from us has created the contours of our being. How we have handled the pain of being human in the past has determined who we are in the present. What we do with our suffering today will form who we are tomorrow.

People get hurt in the world we live in. At times, we suffer because of the cruelty of our enemies. On other occasions, we are betrayed by a loved one or forgotten by a friend. But however it comes, we all end up wounded.

No one gets through this life without scars.

If you want to live well in a world where people are hurt and mistreated, suffer deeply and unfairly, wounded not just in their bodies but also in their souls, it is important to hold on to God’s promise:

Whatever you face — temptations, trials, opposition — God will give you His grace, and His grace will be sufficient for you to overcome.

Looking back on our scars, there are times we can laugh about them. We may even brag about them, shaking them off, “It was nothing, really.” We might even take a strange pride in having been hurt more severely or wounded more deeply than others. But in the moment, whether the wound is physical, emotional, or spiritual, when we are broken and bleeding, there is no laughter or pride. We wonder, How deep will the wound go? How long will I have to endure such pain? How broken will I become? How scarred will I remain when this is over?

God has a promise for us when our way is dark and the suffering is great. When we do not understand what is happening to us and our lives are in chaos, the unfailing promise of a faithful God is this: “Whatever you face and however you suffer, you can hold on because My grace will be sufficient for you.”

These are the words that God spoke to Paul when he pleaded for God to take away his thorn in the flesh.

My grace is sufficient for you, for My power is made perfect in weakness. — 2 Corinthians 12:9

It is a promise that Paul wrote on God’s behalf to all of us.

No temptation has overtaken you except what is common to mankind. And God is faithful; He will not let you be tempted beyond what you can bear. But when you are tempted, He will also provide a way out so that you can endure it. — 1 Corinthians 10:13

The Greek word (peirasmós) translated as “temptation” in 2 Corinthians 12 can also be translated as “testing.” It is often associated with physical suffering or spiritual attack.1 The promise God gives us is that when we suffer to the point that our faith is tested and we are tempted to be unfaithful, He will give us the grace we need to endure the pain and remain true.

He Will Give You the Strength You Need to Overcome

Paul wrote to the church in Corinth that throughout his ministry he suffered from what he referred to as “a thorn in the flesh.” Paul did not describe for the Corinthians what the thorn was. Very possibly they were familiar with his condition and understood his reference perfectly. But two thousand years later we are a bit in the dark. Some scholars have thought Paul was referring to the constant opposition and persecution he suffered. Others believe it was bouts of malarial fever. Some have suggested that Paul suffered from epilepsy. We know from his letter to the Galatians that he had an eye condition that caused him suffering and embarrassment, and some have argued that was Paul’s thorn.

The literal meaning of the Greek word for “thorn” (skolops) in 2 Corinthians 12:7 means “something pointed.”2 It is sometimes translated as “stake” and refers to a sharpened piece of wood that was employed as an instrument of torture or execution. Whether Paul was referring to his affliction as a “thorn” or as a “stake” is unclear. But what is certain is that it was painful enough that Paul referred to it as “a messenger from Satan” and it caused him such torment that he pleaded not once, but three times, that God would remove it from him.

Here’s how he described his condition in his second letter to the Corinthians:

I was given a thorn in my flesh, a messenger of Satan, to torment me. Three times I pleaded with the Lord to take it away from me. But He said to me, “My grace is sufficient for you, for My power is made perfect in weakness.” Therefore I will boast all the more gladly about my weaknesses, so that Christ’s power may rest on me. That is why, for Christ’s sake, I delight in weaknesses, in insults, in hardships, in persecutions, in difficulties. For when I am weak, then I am strong. — 2 Corinthians 12:7-10

Maybe you have been there or maybe you are there now — that place where it feels as if there is a thorn in your flesh. A stake has been driven through your heart. Satan is attacking you. You are so tormented in body and spirit that you do not know if you can bear any more. God’s promise to you is this: “My grace is sufficient for you, for My power will be made perfect in your weakness.”

What are you going through right now? What’s your thorn, your stake? God will give you His grace to get through it. We all have scars, but they tell the story not only of our suffering… but of our overcoming. Come share your thoughts with us on our blog. We want to hear from you! ~ Devotionals Daily