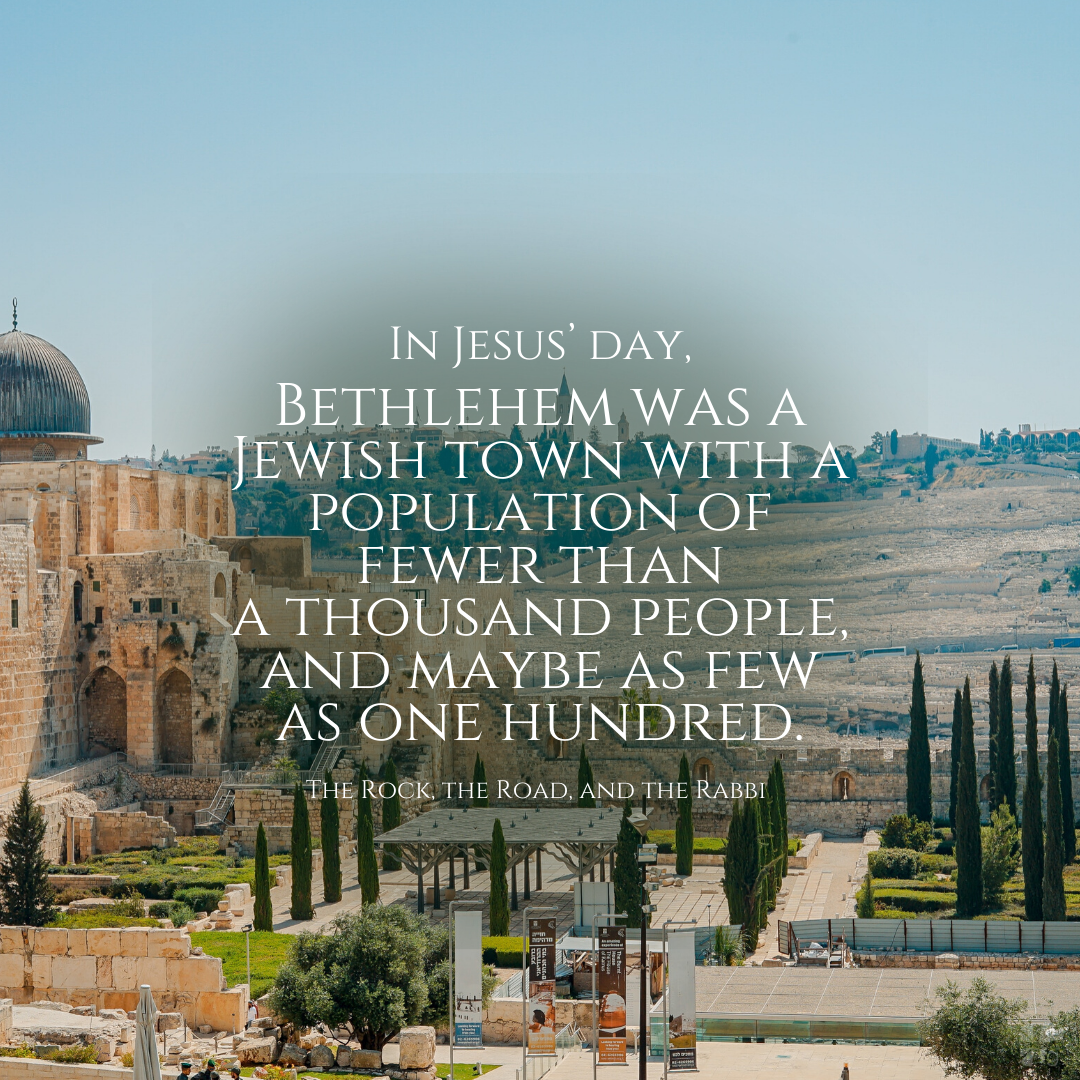 Where It All Began

So Joseph also went up from the town of Nazareth in Galilee to Judea, to Bethlehem the town of David, because he belonged to the house and line of David. He went there to register with Mary, who was pledged to be married to him and was expecting a child. While they were there, the time came for the baby to be born, and she gave birth to her firstborn, a son. She wrapped him in cloths and placed him in a manger, because there was no guest room available for them. — Luke 2:4-7 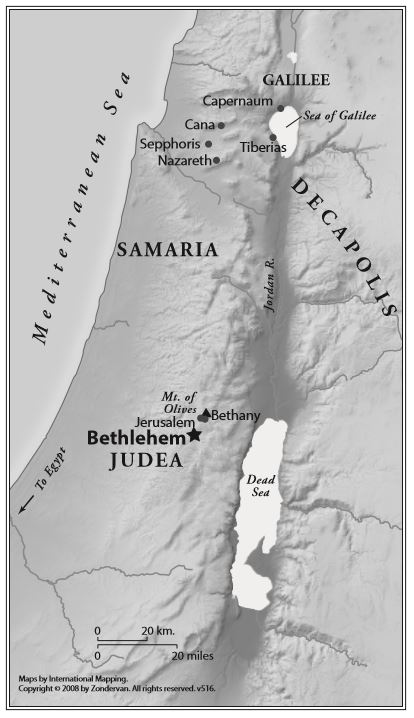 Ask someone in the group to read aloud this introduction to today’s main setting: Bethlehem.

Jesus was born in Bethlehem, a small town about six miles south-southwest of Jerusalem. Today its population is about 25,000, mainly Palestinian Arabs, most of whom are Muslim, though there is a sizeable Palestinian Christian community. It is surrounded by major Jewish settlements of some 170,000 people. But in Jesus’ day, Bethlehem was a Jewish town with a population of fewer than a thousand people, and maybe as few as one hundred.1

Bethlehem was important as the birthplace of King David, a thousand years before Jesus. There was a prophecy that the Messiah, a descendant of David, would be born in Bethlehem. The Messiah was expected to be a godly military leader like David, who would drive out the foreign oppressors who controlled the Holy Land. At the time of Jesus’ birth, His homeland was ruled by a nominal Jew, Herod the Great, who ignored God’s law and collaborated with the hated Romans.

In this session, we will go to Bethlehem to see what happened there in the time of Herod the Great. We will explore the drama behind the Christmas carols about the little town of Bethlehem.

If you or any of your fellow group members do not know one another, take a few minutes to introduce yourselves. Then have each person in the group share an answer to these questions:

What images, feelings, and thoughts come to mind when you hear the word Bethlehem?

What do you hope to get out of a study of the Gospels and the Holy Land?

Play the video segment for session one. As you watch, use the outline below to record any thoughts or concepts that stand out to you.

We tend to picture Jesus as being born in a stable, but the evidence suggests He was born in a cave — the birthing place of lambs.

Jewish tradition tells us the animals born around the fields in Bethlehem were used as sacrifices in the temple for the worship of the Lord.

The caves were kept in a state of ritual purity, and the lambs were wrapped in swaddling cloth to keep them without spot or blemish.

Jesus was wrapped like one of these baby lambs to show that He is the Lamb of God who takes away the sins of the world.

Priestly garments too worn for use were made into the wicks of the menorah in the temple, which points to Jesus as the light of the world.

Every event in Jesus’ life revolves around a Jewish holiday — He died as the Passover Lamb; His resurrection was on the Feast of Firstfruits; and He poured out His spirit on Pentecost.

The Feast of Tabernacles commemorates the wandering of the Israelites in the desert after God liberated them from slavery in Egypt. Each September, Jews build temporary structures much like those the Israelites lived in during their wandering, and live in them during the holiday. This holiday commemorates how God provided manna from heaven to feed the Israelites, water from the stones to quench them, and a pillar of cloud by day and fire by night to guide them. Ultimately, it reflects God’s presence, provision, and pro­tection. And for Christians, it reminds us of the time when “the Word became flesh and made his dwelling among us [literally, tabernacled among us]” (John 1:14).

This is a hands-on activity to help you fix in your mind something you’ve learned in this session. For this activity, you will need cardboard, felt tip pens, white ribbon, and tape.

A crèche is a scene of the nativity, the birth of Jesus. Many Christians set up crèches at Christmastime to help them imagine the wonderful event in Bethlehem. Crèches can be made of wood, pottery, or many other materials. As a way of making the events more real to the members of your group, you can make a simple crèche together.

On sheets of cardboard, draw pictures of Mary, Joseph, the baby Jesus, a manger, shepherds, sheep, and a lamb. Make the adult figures at least six inches tall and the other figures in proportion to them. Cut out the figures. You may color or laminate them if you like. Tape additional wedges of cardboard onto the backs of Mary, Joseph, the shepherds, and the sheep so the figures can stand up. Use white ribbon to swaddle the baby Jesus and the lambs. Arrange your figures the way you imagine them in the cave at Bethlehem.

Another idea to try: buy or borrow a crèche, a nativity scene, to display in your home at Christmastime. Be sure to get some sheep with your crèche. When you display it, wrap the baby Jesus in strips of old cloth (linen would have been used in His day, but cotton will serve just as well). Also, wrap one of the sheep in strips of cloth to represent the young lambs that would have been swaddled there. Let this be a visual reminder of what you’ve learned about Jesus’ birth.

This week, you and your group members learned some insights about Jesus’ birth from Jewish tradition. You learned what Luke may have meant when he wrote in his Gospel about Jesus being wrapped in swaddling cloths and laid in a manger. As you prepare for personal study time this week, reflect on the truth that even from His birth, Jesus was destined to be our Passover Lamb without blemish, born to die to free us from sin and death.

Father of grace, we thank You for sending Your Son into the world to be our Passover Lamb. Thank You that through His coming in the flesh, He has dealt with sin and death for all who trust in Him. We offer ourselves completely to You and ask You to be active and real in our lives this week. Please fill us with courage to face whatever comes to us during the coming week as we keep our eyes fixed on the Lamb. In Jesus’ name, Amen.

Read chapters 5 and 6 of The Rock, the Road, and the Rabbi.

Come share your thoughts on The Rock, the Road, and the Rabbi with us on our blog. We want to hear from you!

Join Kathie Lee on a journey in The Rock, the Road, and the Rabbi video Bible study with the online community at StudyGateway starting April 20. In this 6-session video series you’ll get to study with her and Rabbi Jason Sobel, a Messianic (Jesus-believing) Jew, in the Holy Land.

It's okay to be bummed about travel being canceled because we are bringing the Holy Land to you! The experience is FREE and it’s not your typical Bible study. We hope you’ll find that it’s so much more. A little Bible investigation, historical exploration of some of the most significant biblical locations, and a daily study of the Word of God!

We’re going to get started on April 20th, so register today, learn more, and join the online community as we enter into this one of a kind online adventure together!