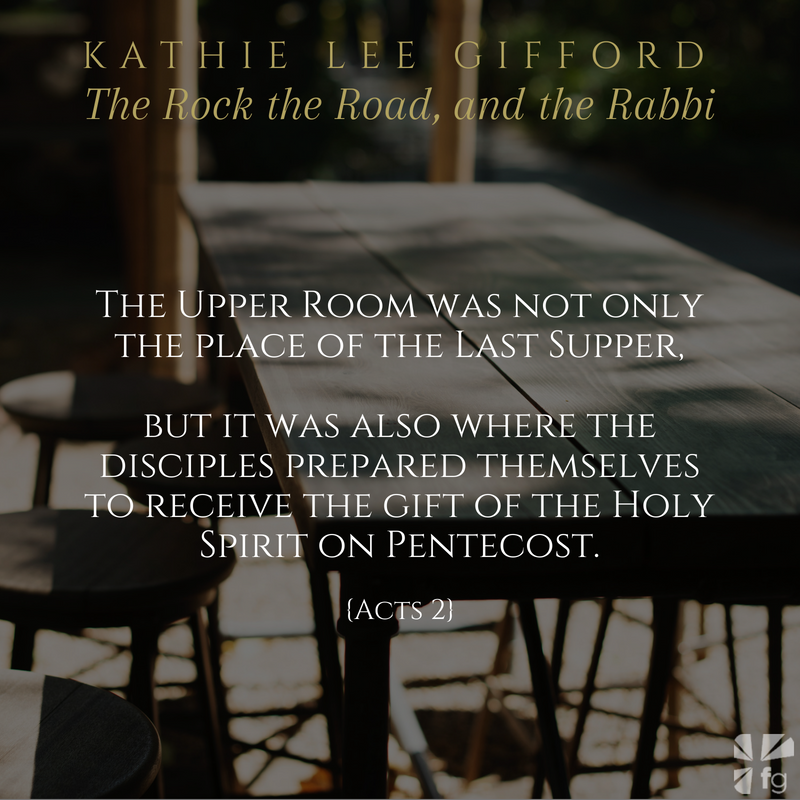 When the day of Pentecost came, they were all together in one place. Suddenly a sound like the blowing of a violent wind came from heaven and filled the whole house where they were sitting. They saw what seemed to be tongues of fire that separated and came to rest on each of them. —Acts 2:1–3

During our first Rock and Road Experience tour with Ray (Vander Laan), he explained to us that two important events occurred in Acts 2:1–3. The first thing that happened is the Holy Spirit entered the room and rested on all the believers there. The second is that the disciples traveled a short way to the steps leading up to the temple.

Come… to the Upper Room!

The Upper Room was not only the place of the Last Supper, but it was also where the disciples prepared themselves to receive the gift of the Holy Spirit on Pentecost (Acts 2).

It is impossible to fully grasp the outpouring of God’s Spirit (and what is commonly understood as the birth of the Church) without first understanding the biblical roots of Pentecost. Pentecost, which means “Fifty Days,” is the Greek term for the biblical Jewish holiday known as Shavuot, the Feast of Weeks (Exodus 34:22; Leviticus 23:9–22; Deuteronomy 16:10).

Jesus died on Passover. He also rose from the dead on the holiday called Firstfruits (Yom HaBikkurim), which was an agricultural holiday that took place on the second day of Passover. In ancient times, an offering of the firstfruits of the barley harvest was given to the Lord. It would be waved before the Lord as a sign of thanksgiving and in eager expectation of greater blessing to come. If you had a good early harvest, it was a guarantee that you would also have an abundant later harvest. Not only were the firstfruits a sign of the greater harvest to come, but the feast started the forty-nine-day countdown to Shavuot/Pentecost.

Nothing is random with God. Therefore, it is appropriate that Jesus, who died on Passover, would arise from the dead as “the firstfruits of those who have fallen asleep” (1 Corinthians 15:20). After He rose, He instructed the disciples to “not leave Jerusalem, but wait for the gift my Father promised… For John baptized with water, but in a few days you will be baptized with the Holy Spirit” (Acts 1:4–5). Jesus’ resurrection on the Feast of Firstfruits started the countdown to Pentecost, which was His Father’s gift — the biggest biblical God party on record, where God literally rocked the house, and there were three thousand salvations in one day! Jesus not only died as the Passover Lamb but was raised from the dead on the day the firstfruits of the barley were offered in the temple!

Why did Jesus choose Pentecost Sunday as the day to pour out the Holy Spirit?

To understand this question, one must know the key historical event that happened on this day. It was on the fiftieth day of Israel’s coming out of Egypt that the Lord descended upon Mount Sinai and spoke the Ten Commandments to Israel. us, Shavuot is also known as Zeman Mattan Torateinu, or “the Time of the Giving of the Torah.”

It is critical to understand that the Torah and the Spirit were given on the same day, the fiftieth day. But why is this so important? At the start of creation,

How does the Lord bring life out of the chaos and the darkness? By His Word and Spirit!

In the same way that the original creation was birthed through Word and Spirit, the work of the new creation begins by God giving His Word and climaxes in the giving of His Spirit on the exact same calendar day so that we might experience the life and light of God’s transforming power!

But there is still more! On the Day of Pentecost in the New Testament,

a sound like the blowing of a violent wind came from heaven and filled the whole house where they were sitting. They saw what seemed to be tongues of fire that separated and came to rest on each of them. All of them were filled with the Holy Spirit and began to speak in other tongues as the Spirit enabled them. — Acts 2:2–4

From a Jewish perspective, Acts 2 is considered to be a reenactment of Mount Sinai or, better yet, a second Sinai experience. The booming of the wind was like the thunderings at Sinai, and the tongues of re over the disciples’ heads were akin to the cleft tongue that came out of the mouth of God when He uttered the Ten Commandments. Targum Neofiti, an ancient Aramaic paraphrase of the Hebrew Bible, describes the giving of the Ten Commandments by the mouth of God, “like torches of fire, a torch of fire to the right and a torch of flame to the left. It flew and winged swiftly in the air of the heavens and turned around and became visible in all the camps of Israel and… became engraved on the two tablets of the covenant.”1

In Acts 2, God again imprinted His Word as He did on Sinai. is time the stone of Sinai was replaced as God wrote His new covenant:

I will make a new covenant with the people of Israel… I will put my law in their minds and write it on their hearts. — Jeremiah 31:31, Jeremiah 31:33

God does not want His Word to remain written on stone tablets; He wants His words to be written on our hearts by the power of the Spirit!

As God redeemed Israel, He has redeemed us through Messiah, and by His power He is transforming all who believe into new creations with new identities and purpose. Israel was called a royal priesthood, a holy nation, on Mount Sinai. Peter declares the same for us:

But you are a chosen people, a royal priesthood, a holy nation, God’s special possession, that you may declare the praises of Him who called you out of darkness into His wonderful light. Once you were not a people, but now you are the people of God; once you had not received mercy, but now you have received mercy. — 1 Peter 2:9–10

Peter himself became a new creation during Pentecost. Instead of the cowering coward who denied Jesus three times, he became Petra (Peter), living up to the name Jesus gave him, which means “rock.” Peter, filled with the power of the Holy Spirit, preached his first sermon and birthed the early church during this Pentecost. Just as in Genesis, as the Spirit hovered over the deep, God spoke the Word, and creation occurred. As it was in the beginning, so it was on that Shavuot (Pentecost) in Jerusalem — the union of Word and Spirit swelled the ranks of the followers of Yeshua by three thousand new creations that day. Word and Spirit resulted in newness of life!

Remember, what God has done in the past, He wants to do again in the present and the future. The past is more than events that have already happened. Those events reflect the heart of God and what He desires to do in and through you. Seek the Lord for your own personal Pentecost as individuals and as a church, and watch the amazing work of transformation that comes through His Word and Spirit.

Don’t you wish you could have been there on the day of Pentecost? But, as believers, we do get to experience both the Word and the Spirit, maybe not with physical flames but it is God’s desire to be the fire within us that spreads the Gospel across the globe! Come share your thoughts with us on our blog. We want to hear from you!