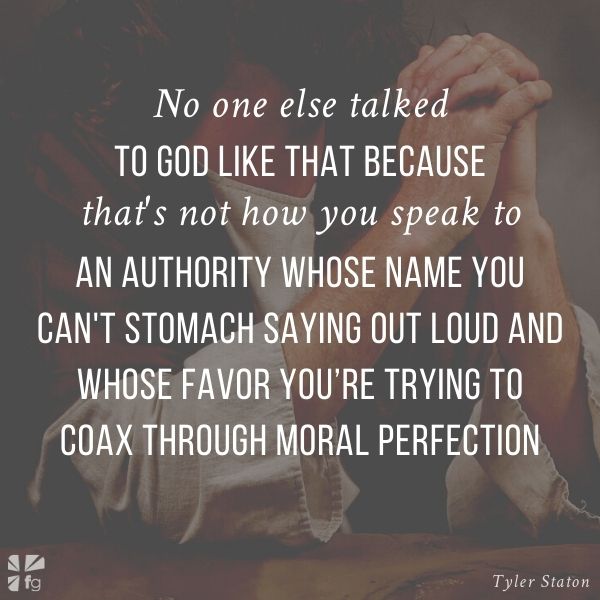 Then the man and his wife heard the sound of the Lord God as he was walking in the garden in the cool of the day, and they hid from the Lord God among the trees of the garden. But the Lord God called to the man, “Where are you?” He answered, “I heard You in the garden, and I was afraid because I was naked; so I hid.”
—
Genesis 3:8-10

The first symptom of this “sin” thing is a warped view of God. Previously in Genesis, walking in the garden in the cool of the day is part of the normal routine for Adam and Eve. To them, God wasn’t a riddle to be solved or an existential question. God was a Being to know and be known by, a Being as real as any of the creatures of his own creation, and a Being altogether good, sheltering them while also looking them in the eye and listening — the protection of a father and the intimacy of a friend. Then suddenly, God is feared, resisted, misunderstood, hidden from. That wasn’t a momentary misconception; that was a new normal. It’s all we’ve ever known.

In her book Leaving Church, Barbara Brown Taylor, herself a former Episcopalian priest with years of personal experience behind her thoughts, writes soberingly:

One thing that had always troubled me was the way people disappeared from the church when their lives were breaking down. Separation and divorce were the most common explanations for long absences, but so were depression, alcoholism, job loss, and mortal illness. One new widow told me that she could not come to church because she started crying the moment she sat down in a pew. A young man freshly diagnosed with AIDS said that he stayed away because he was too frightened to answer questions and too angry to sing hymns. I understood their reasoning, but I was sorry that church did not strike these wounded souls as a place they could bring the dark fruits of their equally dark nights.1

Sadly, I have watched a similar pattern as a pastor. It’s a theme that can be traced all the way back to the very beginning:

Then the man and his wife heard the sound of the Lord God as he was walking in the garden in the cool of the day, and they hid from the Lord God among the trees of the garden.
— Genesis 3:8

There was a time when God could be trusted, when the Creator was Father, Mother, Protector, Comforter, and Friend. But to our ears, that sounds like a fairy tale. A long, long time ago, that image of God got traded in for the God you’re more familiar with — distant, unknowable, untrustable. A God whose company many welcome in their best moments, but equally a God we instinctively keep a distance from in our worst.

Jesus of Nazareth. He was a Jewish peasant from a rural family in a nothing town occupied by Roman soldiers who had long ago proved their domination and were just waiting for a reason to refresh everyone’s memory. He showed up at the temple, the one place the Romans didn’t touch, the one place the Jewish people could ask for help from a God who, although he seemed distant most of the time, had supposedly come through on a national scale in past dire circumstances. So the Pharisees, the priests of Jesus’ day, added rules to an absurdly long list of rules — 613 to be exact. Their plan was simple. Maybe we can live holy enough lives to get God’s attention again, because the God of our ancestors seems to be apathetic or uncaring or distracted or some combination of the three. Maybe we can follow his rules precisely enough to convince him to stretch out that strong right hand we’ve heard so much about. Jesus shows up to their temple and starts praying.

When Jesus prayed, He called God “Abba,” and that was a showstopper. It was scandalous. It was the sort of thing that didn’t belong anywhere in the temple, much less out of the mouth of a rabbi. You see, Israel already knew God’s name — it was Yahweh. That’s how it looks in English, at least. In Hebrew, a written language made up of only consonants, it’s YHWH. The way they arrived at that name shows the incomparable reverence they had for God.

When God identified Himself to Abraham (the man whom Christianity, Judaism, and Islam all trace their roots back to), He said, “I am El-Shaddai.”2 In a Canaanite world that believed in many gods over many nations, El meant “king of the gods.” El-Shaddai was the Canaanite way of saying, “I’m the king of all the gods, but I’m also so much more than what you conceive of when you hear that name.”

Later, God introduces himself to Moses (the guy who led Israel out of Egyptian slavery). In that famous burning-bush moment that changed Moses from a meek shepherd to a meek abolitionist, God called Himself, “I am who I am,” meaning, “I am the unchanging One, the one who has always been, the one who will always be.” Through a bunch of ancient language technicalities you’ll thank me not to go into detail about, YHWH is Hebrew shorthand for “I am who I am.” It’s a way of saying God is incomprehensibly constant. He is completely “other” from our humanness in all the best ways.3

Still, over time, for the serious Jew, even that name wasn’t reverent enough. After all, the Ten Commandments do include, “Thou shalt not take the name of the Lord [YHWH] thy God in vain.” If Old English is confusing, an updated translation reads, “You shall not misuse the name of the Lord [YHWH] your God.”4 Attempting to be sure God’s people didn’t even get close to violating that command, they stopped calling God by His own name altogether, replacing His name with titles like Adonai, meaning, “Lord.” It’s the ancient equivalent of calling someone “sir.” Respectful, formal, and keeping the proper distance.

All that reverence, multiplied over many generations and hundreds of years, and then Jesus walked into their temple and called God Abba. But why is using a different name so scandalous?

The earliest manuscripts of the Gospels — Matthew, Mark, Luke, and John, the four biographical accounts of Jesus’ life — are written in Greek, with only a few exceptions, including Abba, the name Jesus gave God. Abba went untranslated because there is no direct translation. There is no equivalent Greek term. In Aramaic, Abba was the most intimate term one could possibly call a father. The closest thing we have in English is a toddler using the name “Dada,” but that doesn’t quite do it because Abba wasn’t a cheesy name you used as a kid and then grew out of with age. It wasn’t a name you’d be embarrassed to be caught saying to your father as a twentysomething. It was a term of endearment from a son to a father that was lost in translation because it was so rarely used, or maybe so rarely needed. The Greeks didn’t have a term like Abba because no one would address their father with that much intimacy. Jesus spoke to Yahweh with such familiarity we can’t even translate it.

German theologian Joachim Jeremias writes, “There is not a single example of the use of Abba… as an address to God in the whole of Jewish literature.”5 A new way of praying was born. No one else talked to God like that because that’s not how you speak to an authority whose name you can’t stomach saying out loud and whose favor you’re trying to coax through moral perfection. So where did Jesus get the idea He could talk to God like a kid whose dad had just come back from a business trip with souvenirs and presents? From God Himself.

Jesus’ prayers showed us who He really believed God to be —  Abba. Your prayers do the same. It doesn’t matter if your prayers come out in communal liturgy, read aloud together in a sacred building or in the back of your head, never audible, and only after you’ve exhausted every other option. If you want to know what you really think of God, just pay attention to your prayers. Perhaps Nancy Mairs said it best, or at least most directly: “Who one believes God to be is most accurately revealed not in any credo but in the way one speaks to God when no one else is listening.”6

So here’s what Jesus’ prayers tell us He believes about God: “I am His Son, whom He loves; with me He is well pleased.”

We are wandering around the stage, not recognizing the voice of the director anymore, so God inserted Himself into the story and recovered the plot. That’s what Jesus’ prayers were all about.

Excerpted with permission from Searching for Enough: The High-Wire Walk Between Doubt and Faith by Tyler Staton, copyright Tyler Staton.

How does Jesus’ perception of God alter the way you think about your own views & your own prayers? How can you move away from a performance-based faith? We’d love to hear your thoughts in the comments!