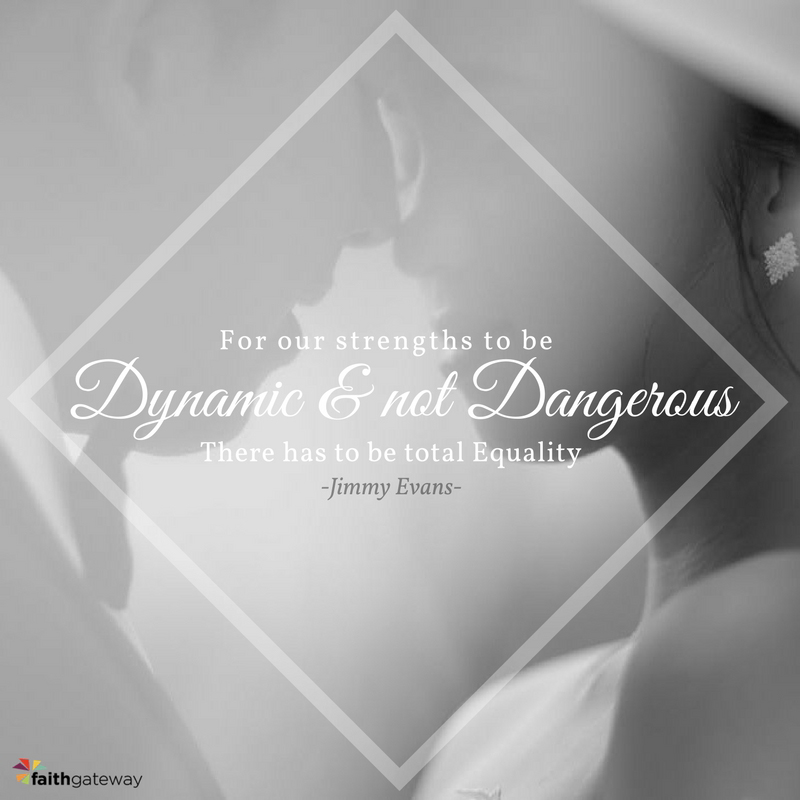 I have conducted marriage seminars all over the world for many years. In my talks I often ask a question that gets the same response wherever I ask it. There are actually two questions I ask. The first is: “How many of you grew up in a home where one parent was clearly dominant over the other parent?” Immediately 70 to 80 percent of the people in the room put their hands up.

Then I ask my second question: “How many of you who just put your hands up believe that it had a negative impact on your parents’ marriage and the family?” Every hand that was raised the first time goes back up. It always amazes me that the response is so predictable and immediate.

In most marriages there is a dominant spouse. That means if the marriage is a corporation, then one spouse owns more stock than the other. They have more say in decision-making. Either through force of personality, manipulation, domination, or some other means, one spouse controls the other. It kills the intimacy and goodwill of the relationship, and it is a gender-neutral issue. There are just as many dominant men as women.

But when one spouse dominates the other, everything changes. The person being dominated feels disrespected. If it is a man being dominated, he will often feel emasculated and deeply resentful of the way his wife treats him. This often causes him to emotionally withdraw from the relationship, which typically causes more anger and dominant behavior from his wife. The emotional distance she senses will often cause her to become even more aggressive.

If a woman is being dominated, she, too, will feel disrespected. This will naturally cause her to feel insecure and unloved. The fact that her husband doesn’t solicit her input and treat her as an equal strikes at the heart of her need for intimacy and connection. The longer she is dominated, the more she loses respect for her husband and any sense of unity with him.

Marriage only works when it is a shared relationship on all levels. When Karen and I got married, I dominated her in every way. Not only do I have a strong personality but also I am a very fast talker. I am never at a loss for words, and I can process information very quickly. Karen is the exact opposite. She processes information slower, and it takes her awhile to decide what she wants to say. Early in our marriage I was a jerk. First of all, I dominated our home and the decision-making. I felt that I was better than Karen and knew more than she did. Second, I didn’t take responsibility for my behavior. When Karen would confront me about something I had said or done, I became a “prosecuting attorney” and basically shouted her down and tried to convince her that she was the problem.

We had no intimacy and were on the brink of divorce. But thanks to God and a good wife, I changed. In looking back on my days as a dominant husband, I realize how exhausting it was. It is hard work being god. And that is who I thought I was. I thought somehow I had the God-given right to dominate Karen and our home.

I look back on those years as the worst time in my life and our marriage. Everything I expected in marriage was turned upside down. Everything I expected from Karen was ruined by my selfish and arrogant behavior. Our differences were a mangled mess and the source of untold tension. And much of my dominant behavior was designed to erase our differences and conform Karen into my image.

On the day I changed, I apologized to Karen and asked her to forgive me. I told her I would never again dominate or demean her, and from that day forward we would make all our decisions together. I told her she could be completely honest and I would never make her pay a price for doing so. And since that day, almost forty years ago, we have acted as a team. In our “corporation” we both own equal shares of stock. And in our “corporation” we are very successful and happy partners.

For our strengths to be dynamic and not dangerous, there has to be total equality.

There cannot be a shred of dominance by either spouse. In our marriage, we are both submitted to God and we submit the decisions of our home to God in prayer. Therefore, we aren’t two stubborn people butting heads. We are two humble and submitted people trying to find the best solution and direction in our marriage.

Dominance in marriage is solved in two ways. First, the dominant person has to sit down and begin to respect his or her spouse and treat that person as an equal. Second, the dominated person must stand up and lovingly demand respect. As the dominant person humbles himself or herself and sits down, and as the dominated person asserts himself or herself and stands up, they will find themselves looking eye to eye as equals. And that will change everything. From that position, marriage becomes fulfilling; and the differences that were once so dangerous become dynamic. From that position — and only from that position — is true and lasting happiness experienced.

Watch The Video: Strengths Based Marriage

Come share your thoughts with us on our blog. We want to hear from you about having a happy marriage, one with total equality.