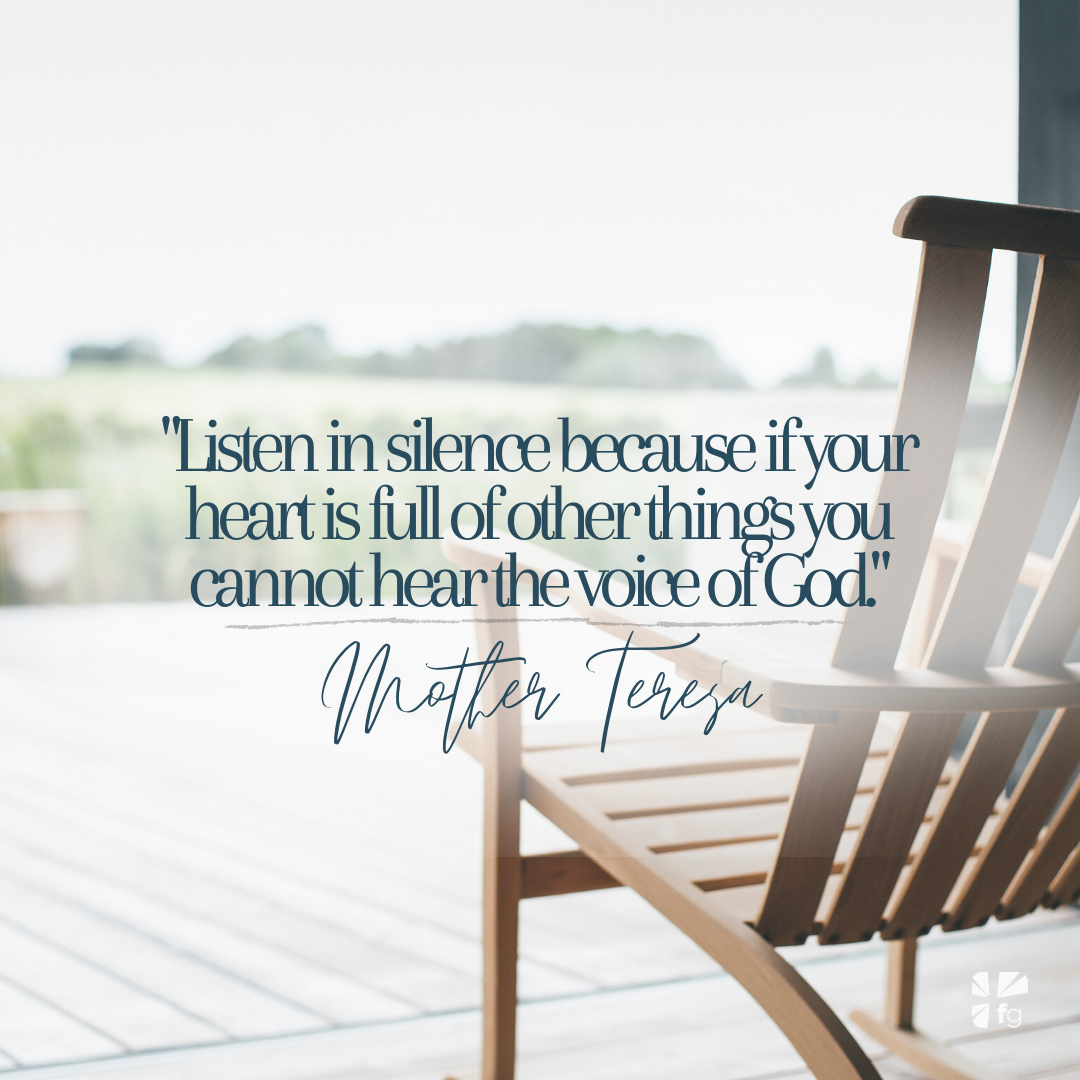 Listen in silence because if your heart is full of other things you cannot hear the voice of God. ~ Mother Teresa

But after the fire a gentle whisper followed. The Lord came to Elijah in that whisper: kol demama daka. Translated, the phrase means “the sound of thin silence.” It’s the kind of voice you can only hear when you quiet the world around you enough to hear it. You have to be listening for it.

I’d heard this story a handful of times growing up, but it wasn’t until adulthood that its true meaning would become clear to me. That is how I’ve found I can hear God most clearly. When I stop brushing everything off as just a coincidence and start paying attention to the small signs He gives me. Sometimes it comes in the form of a number or dates. Other times, it’s a feeling. The only way I know to describe the feeling is to imagine you are in the place that makes you feel the happiest in all the world, you’re with the person or people you love most, your belly is full of delicious food, and you’re at complete peace. That feeling, in that moment, is the same one that comes over me when I know God is the one leading me in a certain direction. For me, it’s a feeling of belonging, like I know somehow that I fit in this particular story. Even if I don’t know how or why, I just fit. I belong in it; even if it’s uncomfortable or not what I had envisioned, I still know I belong there.

I can come up with a lot of harebrained schemes, plans, and grand adventures. It can be hard to know which string to pull, which path to take, or which hill to die on that day. But it’s that feeling of belonging that lets me know that God has placed me here. He wants me to keep going. More important, the feeling of belonging lets me know that the feelings I have are from Him. It’s assurance that I’m where I need to be. If I can quiet the world around me, with its voices telling me who I should be, what I should look like, how many kids I should have, and even how I should worship God — when I can silence those voices, I can hear Him in the kol demama daka.

There is a second piece to hearing the Lord that I feel is equally important; that is, God doesn’t contradict Himself. Throughout history, people have used “hearing from God” as a justification to forward their hateful, corrupt agendas. That’s why it’s important that whenever I feel God leading me toward something, one of my first moves is to read what His word has to say. Does what I feel He is asking me to do contradict His written word? If the answer is yes, then I know it’s my own selfish desires and not a true calling He has placed on my heart. I’m not an expert on Scripture. I don’t have the whole Bible memorized, and I’m not a theologian, but I don’t believe God expects me to be. I believe He asks me to do the best with what knowledge and wisdom He has given me, and with the way I feel His presence guiding me in my prayer life. Ultimately, He wants me to continue to seek Him and His Word, and to seek truth in the noise of this world.

It’s easy to get wrapped up in what we want, especially because our culture tells us that we should always be happy, that we’re in charge of our own happiness, and that we hold the key to it. If we aren’t happy, the solution is simple: we just need to make the necessary changes to get happy. If only life were that easy. Perhaps this is the reason so many people choose to see their wants and desires as the highest priority. When we see people making decisions that seem contradictory to their own happiness and perceived safety, we question them and even grow concerned, instead of cheering them on and backing them up.

My personal struggle in adulthood has all too often been not a struggle to hear the voice of the Lord in my life, but a struggle to actually do what I feel He’s asking of me. That’s where I find my faith tested the most. Am I willing to not just be a hearer of the word, but a doer?

Are you hearing the still, small voice? There’s no better time than now to carve out quite space and time to listen, to be filled, to seek Him. Come share your thoughts on our blog. We want to hear from you! ~ Devotionals Daily