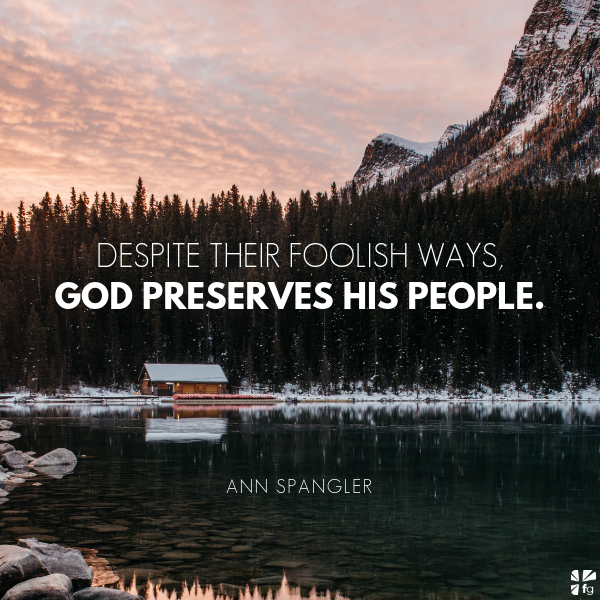 When God Surprises Everyone

Judah remembers the story as though it happened yesterday. He feels it in his gut, like a knife turning. The pain of his treachery is so strong that it overwhelms every other sensation. Indeed, he had turned against his father and his brother, first by selling the conceited young Joseph into slavery and then by joining his brothers in the ruse they invented to explain his death.

“Here is Joseph’s beautiful coat,” they said, handing Jacob the bloodied garment of his beloved son.

“My son has surely been torn to pieces!” he cried. “Some ferocious animal has devoured him.”

Jacob’s agony was made sharper by what he suspected. Could his own sons have taken Joseph’s life? Might they be the ferocious beasts who had torn him to pieces?

Clothing in the Ancient Near East communicated something important about the status of its wearer. The quality of the fabric, the colors, the amount of ornamentation—all these sent a message about the person wearing a particular garment. In this case, Joseph’s coat signified both favor and authority. Rather than a “coat of many colors,” his garment might better be understood as a long-sleeve or full-length coat.

The ornamental robe had been a spectacular gift from father to son, marking Joseph not only as Jacob’s favorite son but as the future ruler of his brothers. No wonder his older brothers had despised him. The garment he loved to wear was a constant reminder of their father’s favoritism, which began with his preference for Rachel over their mother Leah.

Little brother Joseph had made things far worse by speaking openly about his insufferable dreams. Even his father had recoiled when he heard that his seventeen-year-old son had dreamt that the sun, moon, and stars — a code for his entire family — would one day bow down to him.

From the beginning, Jacob’s family had been built on a fault line — the one that ran between Rachel and Leah and their children. What would happen when he died? Without their father holding everything together, it might splinter and disappear, blending in with the surrounding peoples.

Oddly, the brothers’ betrayal of Joseph is what had united them, at least for a time. Reuben, Simeon, Levi, Judah, and all the others — every son but Benjamin — were complicit in the lie. Secretly, many of them — though not Judah — took pleasure in their father’s pain.

When Judah distanced himself from his family by moving to a Canaanite town, he took no thought of the covenant God had made with his forefathers. Turning his back on everyone, including his grieving father, it never occurred to him to consider who might lead this broken band of brothers into the future. Nor did he gaze into the night sky recalling God’s promise to his great grandfather Abraham:

Look up at the heavens and count the stars — if indeed you can count them. So shall your offspring be.

When we next hear of him, he is back with his father and his brothers. Threatened by a severe famine, Jacob sends Judah and his brothers (all except Benjamin) down to Egypt to purchase grain.

None of them suspect the surprise that awaits them in Egypt. For there they will discover the brother they betrayed years earlier. Neither do they recognize him when they encounter him.

Bowing before Joseph, who has become an influential Egyptian official, they explain that they have come to buy food to keep their family from starving.

Though his brothers fail to recognize the powerful man who stands before them, Joseph knows exactly who they are. Instead of disclosing his true identity, he initiates a game in which they will become pawns.

“You are spies,” he accuses them.

“No, my lord,” they protest. “Your servants were twelve brothers, the sons of one man, who lives in the land of Canaan. The youngest is now with our father, and one is no more.”

“If you are honest men,” Joseph replies, “let one of your brothers stay here in prison, while the rest of you go and take grain back for your starving households. But you must bring your youngest brother to me, so that your words may be verified and that you may not die.”

“Surely,” they whisper to each other, “we are being punished because of our brother. We saw how distressed he was when he pleaded with us for his life, but we would not listen; that is why this distress has come upon us.”

When Joseph turns to hide his tears, they do not notice. Nor are they aware this Egyptian understands every word they say.

Leaving Simeon as a hostage, the brothers return home. Though their sacks are bulging with grain, their hearts are filled with anxiety. Judah wonders how they will find the courage to tell their father what has happened — that they have left Simeon behind to rot in an Egyptian jail.

As soon as Jacob hears the news, he exclaims, “You have deprived me of my children. Joseph is no more and Simeon is no more, and now you want to take Benjamin. Everything is against me! My son will not go down there with you; his brother is dead and he is the only one left. If harm comes to him, you will bring my gray head down to the grave in sorrow.”

But as their rations dwindle, Jacob orders his sons to return to Egypt. Even so, he refuses to allow young Benjamin to go with them. Knowing they will perish without further stores of grain, Judah pleads with his father. “Send Benjamin along with me,” he says, “so that we and you and our children may live and not die. I will guarantee his safety. If I fail to return him to you, I will bear the blame before you all my life.”

So Jacob relents, and his sons set out for Egypt. As soon as they arrive, Joseph invites them to dine at his house, ordering his servants to fill their sacks with as much grain as they can carry. After politely inquiring about the health of their old father Jacob, he secretly instructs his steward to hide a silver cup in young Benjamin’s sack. The next morning, after Judah and his brothers have left for home, Joseph orders his steward to pursue them and arrest the brother in whose sack he has hidden the cup.

When Benjamin and his brothers are dragged before Joseph, Judah once again speaks up, this time making the speech of his life. “If the boy is not with us when I go back to my father, we will have brought the gray head of our father down to the grave in sorrow. I myself guaranteed the boy’s safety. Now then, please let me remain as your slave in place of the boy, and let him return to his brothers.”

Judah’s willingness to take Benjamin’s place reveals the kind of man he has become. Not only has he returned to the heart of his family, but he has become willing to sacrifice himself so that his brother might live.1

His desire to pay the price to secure Benjamin’s freedom makes Judah the rightful leader of the clan, the brother who will carry the covenant forward.

When Judah offers to enslave himself so that Benjamin can go free, Joseph can stand the tension no more. Bursting into tears, he exclaims, “I am your brother Joseph. The one you sold into Egypt!” In a moment of stunned silence, the brothers step back. Surely this great man who stands before them cannot be the brother they despise! What will Joseph do? Shocked and confused, they expect the worst. Has God punished them by allowing them to fall into the hands of the brother they betrayed? In a gesture surpassing even Judah’s generosity, Joseph assures them, saying, “Do not be distressed, and do not be angry with yourselves for selling me here, because it was to save lives that God sent me ahead of you. For two years now there has been famine in the land, and for the next five years there will not be plowing and reaping. But God sent me ahead of you to preserve for you a remnant on earth and to save your lives by a great deliverance.”

Then Joseph tells them to bring their families to live in Egypt so that their lives will be preserved.

So Jacob and his large family go down to Egypt. Before his death — and he will perish in Egypt — Jacob summons his sons and tells each of them what will happen to them in the days to come. When it is Judah’s turn, his father says,

Judah, your brothers will praise you; Your hand will be on the neck of your enemies; Your father’s sons will bow down to you. You are a lion’s cub, O Judah… The scepter will not depart from Judah, Nor the ruler’s staff from between his feet, Until he comes to whom it belongs And the obedience of the nations is his.

And so it is that despite their foolish, hateful ways, God preserves His fledgling people. He surprises everyone by bringing great good out of great evil and by raising up Judah as the leader of his people, from whose line will eventually be born the one who will be called the Lion of the Tribe of Judah, the Messiah of Israel.

Excerpted with permission from Less Than Perfect by Ann Spangler, copyright Ann Spangler.