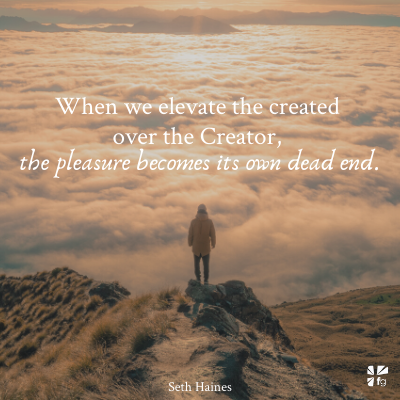 The Life of Christ Speaks of Sacramentality

If the life of Christ shows us anything, it’s that the Stuff of Earth is meant to point us to the substance of Heaven. How? Consider the way He came eating and drinking.

Jesus’ best buddy, John, set out to record the life of Christ, miracles and all, and what was the first miracle he recorded? It was a sacramental miracle, one in which Jesus used creation to draw attention to the Creator. Exercise your scriptural imagination with me.1

A rabbi, a tax collector, and a fisherman walk into a bar where a wedding party is celebrating the vows of a new marriage. But as the entourage makes its way to the hors d’oeuvres line, the rabbi’s mother (a party guest) interrupts, wringing her hands. The wine has run dry, she says. Fix it, Jesus, she says. Jesus (the rabbi) points to the water jugs by the door, the kind used in purification ceremonies. Take the purification jugs, he says, the jugs reserved for holding the cleansing water. Fill them to the brim. Go find the sommelier, he says. (Maybe they spoke French; who’s to say?) When the sommelier arrives, the rabbi asks him to draw a drink from the jugs, and when the man does, what does he find? The good stuff, full-bodied. The best wine of the wedding.

See the miracle? Jesus took the water in those jugs, jugs which were kept around to remind the partygoers of their need for purification, and replaced it with good, strong, whizz-bang-inducing drink. The water of the purification was replaced by the pure wine of a new reality. But Jesus didn’t create wine for the sake of creating wine. It was a sacramental transformation meant to point those who witnessed it to the divine care of a loving God.

“Emmanuel,” Mary might have said as she witnessed the miracle. “God with Us.”

The Life of Christ Speaks of Sacramentality Again and Again

Over and over again, Christ used the whizz-bang-producing Stuff of Earth — water, wine, bread — as means of drawing us deeper into the cosmic communion. Consider the bread He broke, the wine He poured at the Last Supper. They were both the Stuff of Earth, but through them, He drew us into a divine reality. On the night He was betrayed, He took the bread, broke it, and said it was His body. Likewise, He took the wine and said it was His blood (Luke 22:19-20). The disciples didn’t have eyes to see in the moment, but Christ was using the materials of earth as sacramental objects, objects meant to pull them into His story, into His divine, sacrificial, all-satisfying love.

Even after His death and resurrection, Christ used the same bread and wine as an invitation into the divine reality. Recall the two followers of Christ who were making their way to Emmaus when a somehow-masked Christ met them. Remember how Christ walked with them, how He shared a village table with them that evening, how He broke the bread and poured the wine. In that shared meal made of earthly stuff, Luke records how Jesus revealed who He was:

Jesus was recognized by them when He broke the bread. — Luke 24:35

I Am the Sacrament

Bread and wine — these are, perhaps, the most poignant examples of how Jesus used the Stuff of Earth to point to the Creator, how He used it as an invitation to draw us into the love of God. But consider, too, Christ’s use of language, how He described himself as the objects of creation (that same Stuff of Earth) to help us understand and draw deeper into His love.

The Question Worth the Price of a Soul

Christ used the pleasures of life to point us to the God who loves us, cares for us, satisfies us, and who wants to draw us deeper into participation with Him. And it’s not hard to imagine God using other pleasures of life — working, buying, selling, making babies, whatever — to point us to the Divine Love, is it? It’s not hard to imagine Him creating those pleasures at the foundation of the world and crying out, “These are the gifts of God for the people of God. Thanks be to God!”

See? God so loved the world that He gave us the whizz-bang, that whosoever pays attention to the whizz-bang might not miss the point of this one life but might be drawn deeper into the Divine Love. If this is true, then why do we so often adore the pleasures of God as ends instead of as the means of drawing deeper into God’s love? Why do we turn these pleasures into coping mechanisms?

In The Screwtape Letters, C. S. Lewis’s fictitious work on devils, humans, and the mud holes of sin we’re so prone to waller in, Lewis imagines just how the whizz-bang-inducing scent of a rosebush can be fashioned into something more akin to a crown of thorns. In the narrative, Screwtape, the veteran tempter, writes letters to his nephew and rookie devil, Wormwood. Screwtape offers advice to Wormwood, shares how the devil minor might draw his patient into the southern lake of fire. In one of those letters, Screwtape discusses the sacramental pleasures of God:

[God’s] a hedonist at heart. All those facts and vigils and stakes and crosses are only a facade. Or only like foam on the seashore. Out at sea, out in His sea, there is pleasure, and more pleasure. He makes no secret of it; at His right hand are “pleasures for evermore.” Ugh! I don’t think He has the least inkling of that high and austere mystery to which we rise in the Miserific Vision. He’s vulgar, Wormwood. He has a bourgeois mind. He has filled His world full of pleasures. There are things for humans to do all day long without His minding in the least—sleeping, washing, eating, drinking, making love, playing, praying, working. Everything has to be twisted before it’s any use to us. We fight under cruel disadvantages. Nothing is naturally on our side.3

It’s a work of fiction, sure, but doesn’t it ring true? The things created by God — the Stuff of Earth — don’t always lead to dependency, attachment, or addiction. (I’m not addicted to wine at the moment, for example.) But through Screwtape’s subtle twisting of  the pleasures, we come to chase the whizz-bang instead of the giver of the whizz-bang. And when we lose sight of the purpose of the whizz- bang, when we elevate the created over the Creator, the pleasure becomes its own dead end.

1 I was first acquainted with the term scriptural imagination while watching a YouTube video published by the Duke Divinity School. In the video, Dean Richard Hays defines scriptural imagination as “the capacity . . . to see the world through lenses given to us in Scripture.” See https://www.youtube.com/watch?v=hTOVoWbRc0A&t=229s.

Excerpted with permission from The Book of Waking Up by Seth Haines, copyright Seth Haines.

How has God pulled you towards the divine reality through earthly materials? Are you paying attention and looking for the whizz-bang everyday? When life’s pleasures are offered, it can be easy to seek the whizz-bang itself, rather than the Creator of the whizz-bang. But he has come to us through the stuff of earth so that we may be drawn to Him in this life and be embraced by Him in the divine love. Come join the conversation on our blog. We want to hear from you about prayer! ~ Devotionals Daily