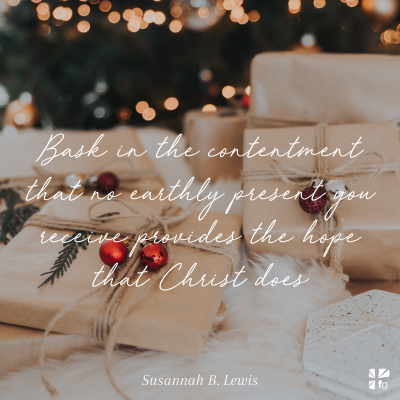 In my mother’s photo album, there’s a Polaroid picture of me from Christmas 1990.  I’m wearing a plaid flannel gown with a red bow on the collar. My dishwater blonde bangs are messy and hanging in my eyes as I sit on the floor next to the twinkling Christmas tree. One hand is ripping Santa Claus wrapping paper from a large box and the other is extended upward in praise. My mouth is dropped wide open and I’m certain a scream filled my floral-wallpapered living room at that very moment.

My own television. With built-in VCR.

I was ecstatic, to say the least. I had been begging my parents for a TV in my room, and I was overjoyed my dream had finally come true. Daddy said I could play the Nintendo I’d received the Christmas before and watch all of my favorite VHS tapes from the comfort of my canopy bed.

I often think back on the gratefulness and excitement and sheer delight associated with my childhood Christmases. Sadly, that magic and splendor faded as I got older. I was deflated to learn who really read my letters addressed to the North Pole and ate the cookies and drank the milk on the hearth. The happiness on my children’s faces as they open presents and anticipate reindeer landing on the roof is a joy to witness, but for most of us Christmas is just more exhilarating when we are kids.

And what a shame that is.

That television with built-in VCR held up for a few years, but it finally ate my “Beaches” VHS tape and was hauled off to a dumpster on a country road in my hometown. Every board game, CD player or pair of expensive shoes that rested beneath a tree with my name on the tag eventually found its way in a donate pile, too.

Everything you or I have received in a box with Santa Claus wrapping paper that brings some temporary joy can be destroyed by moths and rust. It can be taken from us. The shiny, newness wears off. It loses its value and importance.

As Christian adults, the Christmas season should conjure more bliss than that gift of a television or bicycle or Barbie doll did when we were children. It shouldn’t be lost on us that this season is meant to celebrate the greatest gift of all — a true treasure that can never be taken from us. That is the gift of Jesus and along with Him salvation and an eternity promised in Heaven where we are made whole with the loved ones who are no longer here on this earth to celebrate holidays with us.

It’s a shame how numb so many of us become to the Christmas Story. A young, pregnant woman carried a Child that was a threat to evil from the moment He was conceived. She rode on a donkey but was destined to give birth to a King. And that precious King wasn’t born in an elaborate palace but in a dirty, grimy, cold stable to emphasize how humble and approachable He is. The young woman’s baby grew into a sinless Man who walked this earth in love and performed miracles and provided hope. Although blameless, He was eventually chosen over a condemned murderer, Barabbas, to die on a Cross. His death wasn’t quick and painless. He suffered unimaginable pain and an excruciating death that left Him bruised and bloody and beaten. When He took His last shallow breath on that Cross, the sky wept and the earth shook. His bloodstained, lifeless body was wrapped in linen and placed in a tomb. His loyal followers mourned his death for three days until Luke 24:2 says,

They found the stone rolled away from the tomb.

He did what He said — He conquered the grave and hell. Everyone who believes in that — believes in Jesus’ death, burial and resurrection — is promised an abundant life.

The crucifixion was for us. Jesus bled and wept and surrendered His life for you and for me and every sin we’ve committed and will commit. Although He had the power to remove the heavy nails from His wrists and feet and come down from that rugged cross, He didn’t because He loves us.

This Christmas, ask the Lord to restore childlike excitement and giddiness over the ultimate gift — Jesus Christ. Invite the Holy Spirit to flood your heart with thankfulness for every event that took place from His immaculate conception to His miraculous resurrection. Bask in the contentment that no earthly present you receive provides the hope that Christ does. Nothing wrapped in ribbons and bows has the power to give us an abundant life here on Earth and eternity in Heaven. Don’t let it be lost on you the price that Jesus paid for us and the goodness and favor God bestowed on us by sharing His holy Son with us.

Jesus loved you enough to die for you.

That is more exciting than unwrapping a television.

Written for Devotionals Daily by Susannah B. Lewis, author of Can’t Make This Stuff Up.

Does the wonder of Christmas — the Christ in Christmas — seem sort of numb to you this year? Let’s remind ourselves of His story! Nothing is worth greater celebration! Come share your thoughts with us on our blog. We want to hear from you! ~ Devotionals Daily