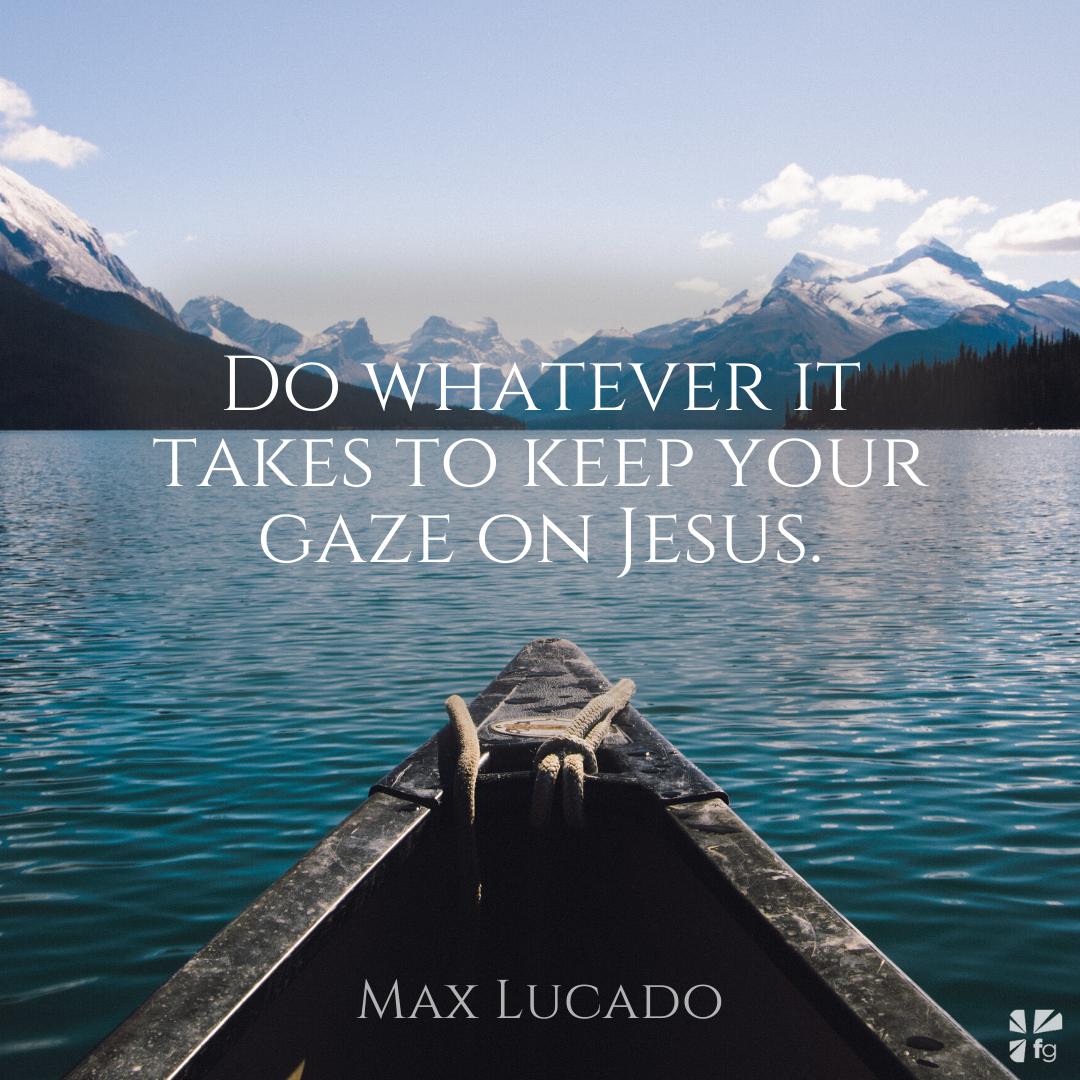 Jesus and the disciples were in a boat crossing the Sea of Galilee. A storm arose suddenly, and what was placid became violent. Monstrous waves rose out of the sea and slapped the boat. Mark described it clearly:

A furious squall came up, and the waves broke over the boat, so that it was nearly swamped. — Mark 4:37

Imagine yourself in the boat. It’s a sturdy vessel but no match for these ten-foot waves. It plunges nose-first into the wall of water. The force of the waves dangerously tips the boat until the bow seems to be pointing straight at the sky, and just when you fear flipping over backward, the vessel pitches forward into the valley of another wave. A dozen sets of hands join yours in clutching the mast. All your shipmates have wet heads and wide eyes. You tune your ear for a calming voice, but all you hear are screams and prayers. All of a sudden it hits you — someone is missing. Where is Jesus? He’s not at the mast. He’s not grabbing the edge. Where is He? Then you hear something — a noise… a displaced sound... like someone is snoring. You turn and look, and there curled in the stern of the boat is Jesus, sleeping!

You don’t know whether to be amazed or angry, so you’re both. How can He sleep at a time like this? Or as the disciples asked,

If you’re a parent of a teenager, you’ve been asked similar questions. The time you refused to mortgage your house so your daughter could buy the latest-style tennis shoes, she asked, “Don’t you care if I look out-of-date?”

When you insisted that your son skip the weekend game and attend his grandparents’ golden anniversary, he asked, “Don’t you care if I have a social life?”

When you limited the ear piercing to one hole per lobe, the accusation came thinly veiled as a question: “Don’t you care if I fit in?” Do the parents care? Of course they do. It’s just that they have a different perspective. What the teenager sees as a storm, mom and dad see as a spring shower. They’ve been around enough to know these things pass. So had Jesus. The very storm that made the disciples panic made Him drowsy. What put fear in their eyes put Him to sleep. The boat was a tomb to the followers and a cradle to Christ. How could He sleep through the storm? Simple, He was in charge of it.

The same happens with you and televisions. Ever dozed off with the TV on? Of course you have. But put the same television in the grass hut of a primitive Amazonian Indian who has never seen one, and, believe me, he won’t sleep. How could anyone sleep in the presence of a talking box! As far as he knows, those little people behind the glass wall might climb out of the box and come after him. There is no way he’s going to sleep. And there is no way he’s going to let you sleep either. If you doze off, he’ll wake you up. “Don’t you care that we’re about to be massacred?” Rather than argue with him, what do you do? You just point the remote at the screen and turn it off.

Jesus didn’t even need a remote.

He got up, rebuked the wind and said to the waves, ‘Quiet! Be still!’ Then the wind died down and it was completely calm. He said to His disciples, ‘Why are you so afraid? Do you still have no faith?’ — Mark 4:39-40

Incredible. He didn’t chant a mantra or wave a wand. No angels were called; no help was needed. The raging water became a stilled sea, instantly. Immediate calm. Not a ripple. Not a drop. Not a gust. In a moment the sea went from a churning torrent to a peaceful pond. The reaction of the disciples? Read it in verse 41:

They were in absolute awe, staggered. ‘Who is this, anyway?’ they asked. ‘Wind and sea at His beck and call!’ — Mark 4:41 The Message

They’d never met a man like this. The waves were His subjects, and the winds were His servants. And that was just the beginning of what His sea mates would witness. Before it was over, they would see fish jump into the boat, demons dive into pigs, cripples turn into dancers, and cadavers turn into living, breathing people.

‘He even gives orders to impure spirits and they obey Him,’ the people proclaimed. — Mark 1:27

Thine is the Kingdom, and the power, and the glory, for ever. — Matthew 6:13 KJV

Peter came to experience the miraculous power of Christ firsthand. In another storm, when the boat of the followers threatened to capsize, Jesus came walking on the water toward the disciples. Peter’s response was

Peter never would have made this request on a calm sea. Had Christ strolled across a lake that was as smooth as mica, Peter would have applauded, but I doubt he would have stepped out of the boat. Storms prompt us to take unprecedented journeys. For a few historic steps and heart-stilling moments, Peter did the impossible. He defied every law of gravity and nature; “he walked on the water to go to Jesus.”

My editors wouldn’t have tolerated such brevity. They would have flooded the margin with red ink: “Elaborate! How quickly did Peter exit the boat? What were the other disciples doing? What was the expression on his face? Did he step on any fish?”

Matthew had no time for such questions. He moves us quickly to the major message of the event: where to stare in a storm.

But when [Peter] saw that the wind was boisterous, he was afraid; and beginning to sink he cried out, saying, ‘Lord, save me!’ — Matthew 14:30 NKJV

A wall of water eclipsed his view. A wind gust snapped the mast with a crack and a slap. A flash of lightning illuminated the lake and the watery Appalachians it had become. Peter shifted his attention away from Jesus and toward the squall, and when he did, he sank like a brick in a pond. Give the storm waters more attention than the Storm Walker, and get ready to do the same.

Whether or not storms come, we cannot choose. But where we stare during a storm, that we can choose. I found a direct example of this truth while sitting in my cardiologist’s office. My heart rate had the pace of a NASCAR race and the rhythm of a Morse code message. So I went to a specialist. After reviewing my tests and asking me some questions, the doctor nodded knowingly and asked me to wait for him in his office.

I didn’t like being sent to the principal’s office as a kid. I don’t like being sent to the doctor’s office as a patient. But I went in, took a seat, and quickly noticed the doctor’s abundant harvest of diplomas. They were everywhere, from everywhere. One degree from the university. Another degree from a residency. The third degree from his wife. (I’m pausing to see if you caught the joke... ) The more I looked at his accomplishments, the better I felt. I’m in good hands.

About the time I leaned back in the chair to relax, his nurse entered with a sheet of paper. “The doctor will be in shortly,” she explained. “In the meantime he wants you to acquaint yourself with this information. It summarizes your heart condition.” I lowered my gaze from the diplomas to the summary of the disorder. As I read, contrary winds began to blow. Unwelcome words like atrial fibrillation, arrhythmia, embolic stroke, and blood clot caused me to sink in my own Sea of Galilee.

What happened to my peace? I was feeling much better a moment ago. So I changed strategies. I counteracted prognosis with diplomas. In between paragraphs of bad news, I looked on the wall for reminders of good news.

That’s what God wants us to do. His call to courage is not a call to naiveté or ignorance. We aren’t to be oblivious to the overwhelming challenges that life brings. We’re to counterbalance them with long looks at God’s accomplishments.

We must pay much closer attention to what we have heard, so that we do not drift away from it. — Hebrews 2:1 NASB, emphasis mine

Do whatever it takes to keep your gaze on Jesus.

When a friend of mine spent several days in the hospital at the bedside of her husband, she relied on hymns to keep her spirits up. Every few minutes she stepped into the restroom and sang a few verses from “Great Is Thy Faithfulness.” Do likewise! Memorize scripture. Read biographies of great lives. Ponder the testimonies of faithful Christians. Make the deliberate decision to set your hope on Jesus. Courage is always a possibility.

‘Lord, save me!’ Immediately Jesus reached out His hand and caught him. ‘You of little faith,’ He said, ‘why did you doubt?’ And when they climbed into the boat, the wind died down. — Matthew 14:30-32

Jesus could have stilled this storm hours earlier. But he didn’t. He wanted to teach the followers a lesson. Jesus could have calmed your storm long ago too. But He hasn’t. Does He also want to teach you a lesson? Could that lesson read something like this: “Storms are not optional, but fear is”?

His lesson is clear. He’s the commander of every storm. Are you scared in yours? Then stare at Him.

Are you feeling afraid of the storm you’re in? Do you wonder what on earth Jesus is doing? Or if He even knows what’s going on? Or sees? Or cares? He’s with you. And He has all the power and control. Keep your eyes on Him! Come share your thoughts with us on our blog. We want to hear from you!