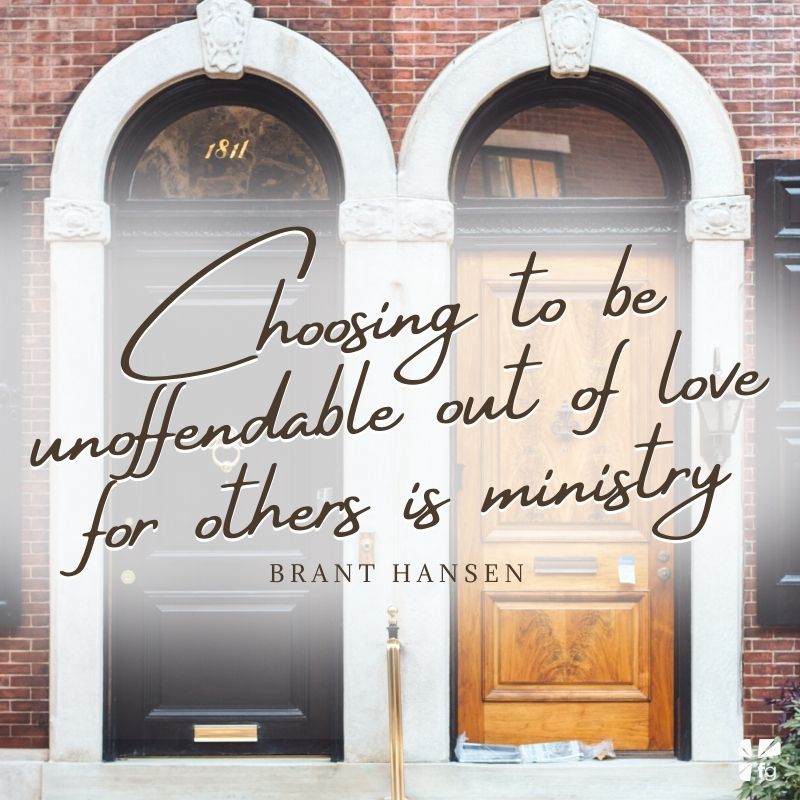 That’s me. I’m terrible at neighborhood stuff. I’m aware of this. I don’t like it, and I’m trying to change it.

Because I’m socially awkward, the last thing I ever want to do is strike up a conversation with the guy walking in the apartment next door. I’ve got nothing to say. I’ve even practiced coming up with something. It’s really, really hard.

My wife is super-nice by nature. People gravitate to her. I scare people off because I look too intense all the time. I’m a brooder, which sounds cooler than it is. People think I’m deep in thought.

Anyway, I’m horrible at meeting people, and I don’t notice them very easily, either. I’m kind of oblivious. My Asperger’s syndrome has something to do with that, too, but I don’t want to use it as an excuse.

So I didn’t notice the mom and the stroller. Never. My wife did, but I never noticed her.

One day, the landlord came to our door and told us about the horrible thing that had happened, and my wife tried to describe the young mom to me. “Andrea was the one who took her little baby boy out for a walk all the time, and she was pregnant with her second baby, and her husband’s name is Jarrod… You don’t know who I’m talking about?”

We lived in very tight quarters. All of our units were three stories, but narrow, and we were packed in. I guess I saw lots of people, but I didn’t remember anyone because, as I said, I don’t talk to people, even if I manage to notice them.

Andrea and Jarrod had been driving back from Andrea’s parents’ house, her landlord told us. Their little boy was in the backseat. Jarrod swerved to avoid something in the roadway. He drove into a deep ditch, and the car flipped over and sank into the water and Florida muck.

Andrea couldn’t get out of the car. Jarrod barely did, through his window. Passing motorists saw the car submerged and flipped it out of the water. The doors were stuck. They couldn’t get to Andrea or the boy through the driver’s side window. Someone handed Jarrod a shovel. He started hammering away to somehow, someway, get to his pregnant wife and child, trapped in the mud.

The windows were smash-resistant. It took too long.

Andrea died. The little boy had stopped breathing, but CPR saved his life.

“Jarrod’s coming back from her funeral today, I guess,” their landlord told us. “Just thought you should know, since their unit is directly across the lane.”

A couple of days later, Carolyn told me she’d seen Jarrod outside earlier that day, walking with his little boy. She’d not ever spoken with him, but knew from Andrea that he worked out of his own home. So it was just him and his boy in their house, she said, and that must be incredibly lonely.

And I thought about that, and then I did something very un-Brant-like. I got up and walked across the street. I stared at the doorbell, and I waited, and then I pushed it, hoping that no one would answer the door. I didn’t know what to say.

Jarrod opened the door and stared at me. His little boy was at his legs.

“I’m Brant. I live right there,” I said, pointing. “I don’t know what to say to you. But my wife and I heard what happened, and we’re heartsick for you. I’m so, so sorry.”

He just looked at me.

He asked me to come in.

I didn’t have to say much, as it turned out. He desperately wanted to just talk about everything. How he and Andrea had met, things she’d enjoyed doing and making, things she’d wanted to do. He showed me pictures. I asked him about her and played with the little boy while he told me about the accident too.

He talked to me for more than two hours.

He asked me if I was religious or something. I told him I was a Christian. He said it makes sense, because his other neighbors run away from him. The ones he’d been social with now just looked at him and looked away and hustled inside their homes.

The next weeks, then months, were excruciating for him. He had wild swings of optimism, despondency, gratitude, and abject rudeness. He wasn’t able to be a fun, encouraging friend. It just wasn’t possible. He believed in God and was angry at Him. He was crushed with loneliness and loss. He was taxing to be around. And who wouldn’t be?

Amazingly, I kept doing the un-Brant-like thing and kept going back over, kept pushing the doorbell. So not my style.

Jarrod left the neighborhood two years later and moved up north to be near his family and a new romantic interest. It had been exhausting. For two years, Carolyn and I couldn’t look out the window without seeing into his first-floor den, where he worked alone, day and night.

My wife thought it was an answer to prayer, both that he now had some momentum in his life and that I was getting a break.

Before I’d walked across the street that first time, I thought,

It doesn’t even matter what he says to me. And it doesn’t matter if I feel stupid. I just want to love people for once.

When Jarrod asked me if I was religious, I was surprised by the reaction that, in his mind, it somehow “makes sense” that a Christian would be there. I didn’t expect him to say that, and I’m often too quick to criticize our shortcomings as believers. But you know what? It does make sense.

We don’t run away from it. We run toward it. And we run toward it knowing full well that people may thrash about, scream, punch, kick, curse, cry, and yell at God and us… and then, when they look up, wondering, Are you still there?… we’re still there.

That’s because when we’re at our best, you can kick and punch, sure, but you can’t offend us.

I tell that story with some trepidation because I’m kind of a good guy in my own story. I’m hoping, though, that you realize this spate of others-centeredness is very out of character for me — out of my previous character, anyway. But it made me think, Maybe I’m growing up. Maybe that’s what obedience looks like.

It may have been something you would do without thinking, like an obvious thing. I don’t doubt it. Sometimes it takes me a long time to “get it.”

It may also have been obvious to you, for a long time, that “ministry” itself — serving others — has to involve deciding not to be offended.

It’s not an option. It is the essence of ministry. It finally occurred to me that we can’t be agents of healing in people’s lives unless we’re ready to bear their wounds for them and from them. Looking back, I wonder why it took me so long, how someone who purports to follow Jesus wouldn’t have understood this.

He did precisely this for us: bore our wounds, and took a beating from us, and endured our betrayals. But He was not alienated from us. The disciples who’d abandoned Him looked up, and there He was, on the shore, making breakfast for them.

I want to be like that. When I’m at my best, you can’t offend me. When you look up, I want to still be there.

This is ministry itself. I’m not sure there’s another kind.

This is what it means to work in a nursing home, among the senile. My grandma was the quintessential bread-baking, flower-growing, sweet-hearted grandma. She served my demanding, rude grandpa for more than a decade, hand and foot, after he endured paralysis and disease. She knew him as a different man. When she looked at him, she saw the man she knew he was and who he could be.

She passed away not long ago, after becoming senile herself. Her nursing home staff was so kind to her. One day, a nurse handed her a glass of orange juice, and my grandma, the sweetest grandma ever, threw it back in her face.

My grandma wasn’t herself anymore. A little while later, after Grandma had calmed down, the nurse brought her another juice.

That’s what servants do. To be in ministry means to choose to be unoffendable.

Ask anyone in ministry to the homeless. Or families who open up homes and hearts to foster children. Or prison ministers. Or people serving troubled kids. Or anyone, anywhere, truly serving anyone.

It’s not a side issue, not a secondary concern, not a strategy. Again: Choosing to be unoffendable out of love for others is ministry. And real ministry forces us to abandon our relentless search for approval from others.

That frees us to love… beautifully and recklessly.

Are we as Christians unoffendable? Especially in the current climate, do we let offenses roll right off us and serve those who behave badly? Are we being like our Jesus? Come share with us on our blog. We want to hear from you about growing up and still being there for others as Jesus did! ~ Devotionals Daily