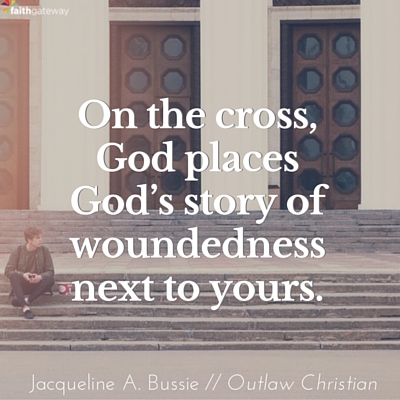 As Christians, we are all familiar with the story of Thomas, which we usually understand to convey the lesson that doubt is the opposite of faith and is therefore sinful and wrong.  Can doubt be seen not simply as faith’s wimpy opposite, but instead as a sign of a faith that is alive, vibrant, and in authentic relationship with God?  For today’s devotional, let’s take a closer look at the scriptural story of Thomas to see if that is really what the scripture teaches, or if there is more to the story.

The disciple named Thomas speaks only twice in the Gospels. A lot of Christians give Thomas — whom many call “doubting Thomas” — a bad rap, not so much because of what the Gospels say about him, but because of the faith-law that gives doubt a bad rap. In the gospel of John, when Jesus appears to the disciples after His resurrection, no one recognizes Jesus right away. Mary Magdalene, the first to glimpse Jesus at the tomb, mistakes Jesus for the gardener. When Jesus appears later to the male disciples, they don’t recognize Him either until Jesus “showed them His hands and His side” (John 20:20). But Thomas wasn’t there for this; so when the disciples tell Him about these incredible visits from Jesus, he says he won’t believe that they “have seen the Lord” until he sees “the mark of the nails in His hands,” puts his “finger in the mark of the nails,” and puts his “hand in His side” (John 20:25). When Jesus shows up again, He addresses Thomas first thing by saying,

Put your finger here and see My hands. Reach out your hand and put it in My side. — John 20:27

Thomas does this and then cries out,

What outlaw Christians notice in this story is not the one and only line we are taught to notice — Jesus’ command, “Do not doubt but believe” (v. 27). First, we notice that everyone else in the story fails to recognize Jesus also, but for some strange reason, only poor Thomas gets labeled “doubter.” This suggests the “doubting Thomas” interpretation is an unfair reading that probably misses the point. Second, while everyone else in the story seems to have forgotten Jesus’ suffering (and crucifixion) in light of His glorious resurrection, there is only one person who remembers it — and asks about it.

Thomas, in other words, is the only person who remembers Jesus’ whole story — all the hurt, and the hope too.

Thomas believes redemption is more than just an erasure of pain.

For him, redemption involves the way people live on in spite of the fact that they still carry scars on their skin. Thomas expects scars. If the guy in front of Him doesn’t have scars, Thomas will know He can’t be the Jesus he knew — because the real Jesus suffered something awful. Thomas is the only one in the room brave enough to remember that a friend’s painful wounds still remain without having to be shown them first. He remembers that the suffering of Jesus is real, just like our own suffering.

This radical new reading of Thomas helps us make sense of why in the only other Bible story (John 11) in which Thomas speaks, he is beyond a shadow of a doubt — pun intended! — portrayed not as a faithless loser but as the bravest, most loving, authentic friend Jesus has. When Lazarus dies and Mary and Martha beg Jesus to come back to them in Judea, the disciples try to talk Jesus out of it by saying,

The Jews were just now trying to stone you, and are you going there again? — John 11:8

But Thomas — and only Thomas — pipes up and says,

All the other disciples fear for Jesus’ life and their own, but Thomas is willing to die alongside Jesus.

It’s so sad that we label Thomas “doubting Thomas,” but ignore the fact that he is also “willing-to-die-with-Jesus Thomas.” What is the ironic point of the story? Could it be that scar-sharing is the solid foundation for any authentic friendship? That no one really knows who we are until we are brave enough to show our scars to them? That the people who have put their fingers and eyes on our scars and still stick with us anyway are the people who understand best how to love us? Thomas’s story teaches us all of these lessons and more. Those people in your life who accept and name suffering for the wounding thing it actually is are the only friends who can ever override the fear of walking with you down all life’s paths of pain. Only people who believe your wounds are real in the first place can ever imagine placing their wounds next to yours. On the cross, God places God’s story of woundedness next to yours.

Have you ever considered the telling fact that the Latin word stigmata that Christians have used for centuries to describe Jesus’ scars is just the plural of the English word stigma, meaning a mark of shame, disgrace, or humiliation? Here, our very language exposes the teaching that all scars — even Jesus’ — are stigmas. How many of us have been wounded by this terrible lie and faith-law! Jesus, however, refuses to see His scars as a source of humiliation or shame, or even as a thing to keep hidden. Instead, Jesus readily and boldly shows His scars to His friends. As I see it, Jesus flat-out rejects the idea that we should be ashamed and secretive about the unjust and terrible things other people have done to us.

Not only is Thomas unafraid to ask Jesus about His scars, but Jesus is also unafraid to show them to him. Both are heroic actions.

Why then are we so terrified of showing our scars or asking anyone about theirs? Are we missing the point of the story, which might just be that scar-sharing brings resurrection? Thomas is like that character in the novel Little Bee who says in one of my favorite quotes: “A scar is never ugly. That is what the scar makers want us to think. But you and I, we must make an agreement to defy them. We must see all scars as beauty…. Because take it from me, a scar does not form on the dying. A scar means, I survived.”1  While many Christians remember Thomas as the loser who doubted Jesus’ post-resurrection appearance, outlaw Christians remember Thomas instead as the bold friend who, because he refused to believe scars were stigmas, cared enough to ask Jesus about His scars that He survived. Inspired by Thomas, let’s go and do likewise with our friends.

Are you hiding your scars? Do you feel ashamed of them? Today, let’s take one brave step into authentic Christlikeness and say what is true, show what is true, and live what is true just as He did! Come share your thoughts with us on our blog! We want to hear from you. ~ Devotionals Daily