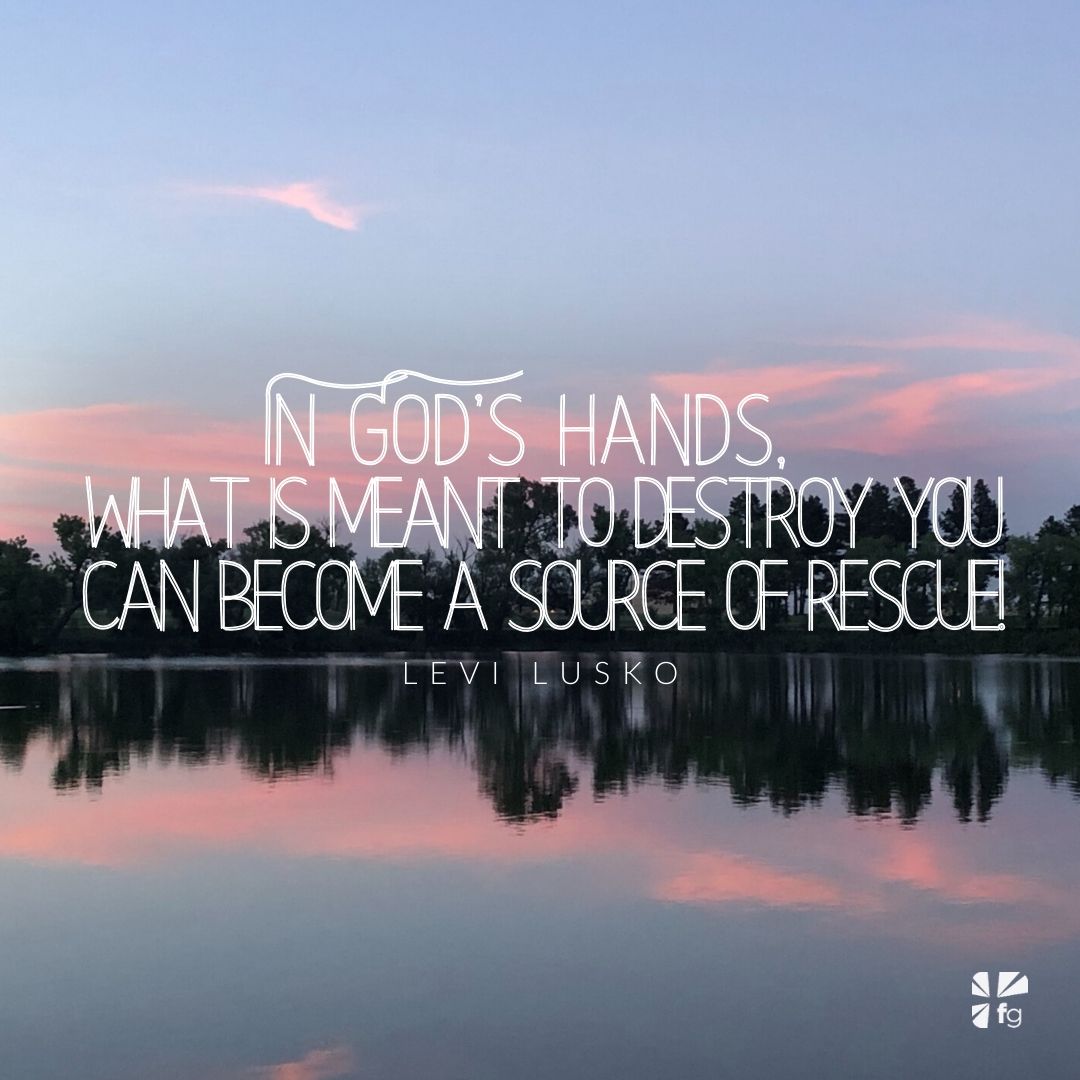 The mustached man grabbed my arm roughly and said, “Come with me.” Anger flashed in his eyes. As he led me forcefully to the front of the store, he explained that he was part of the undercover security team, and he had witnessed me shoplifting.

This was a revelation to me. I was shopping for a few last-minute items before leaving for a mission trip to Nepal, and besides the few toiletries in my basket, I hadn’t touched anything else in the store. However, his aggression was so convincing that I almost doubted my own innocence. This guy had clearly missed his calling as a DEA task force assassin ninja warlord commander. (Why is there always an inverse correlation between someone’s level of authority and how seriously they take themselves?)

He took me to an office, where he thoroughly inspected the few items I had in the basket and made me empty my pockets before concluding that I had not been shoplifting after all. With a sheepish look and a perfunctory apology, he reluctantly released me into the general population.

The impact that experience had on me was immediate and twofold: First, I was cured of the desire to ever return to that particular store and will go out of my way to find an alternative. On the rare occasions I have had no choice but to return, I’ve done so begrudgingly, and subsequent visits have done little to unsully the brand for me. The second and more interesting effect has been the greater awareness of the fact that I am always being watched, and not just by closed-circuit security cameras. I never knew that there were plainclothes “civilians” involved in loss prevention. It both makes sense and is creepy, and it’s led to a distrust of other shoppers when I am in retail spaces. I’ll see someone picking out jeans at Costco or acting interested in a blender at Williams-Sonoma and think, That’s so fake. Then I pretend like I am going to shove a waffle maker into my jacket, just to see if they’ll twitch.

Throw the Baby in the River

There was a day when one of the most significant figures in all of history thought he was in the clear, but in fact he was being watched. It’s our main man Moses. Any larger-than-life character’s origin story is compelling, and Moses’ does not disappoint. He was an Israelite born in Egypt when they were slaves under the reign of Pharaoh. The descendants of Jacob had originally sought sanctuary in Egypt when Joseph, one of their own, was the second in command. But Joseph had long since died, and the Israelites had become enslaved. Now several million strong, they were seen as a threat to the Egyptians. So Pharaoh hatched a plan to wipe them out.

Since they were reproducing so quickly, Pharaoh instructed the midwives, who were all in his employ, to kill every Israelite boy at birth. When the midwives chose to ignore those orders, he issued an edict that all newborn males must be thrown into the Nile River alive. The result of this horrible decision would be that only Israelite women would remain, and they would be forced to intermarry with the Egyptians. Soon there would be no children of Israel left at all.

Many, many baby boys died barbaric deaths as they were torn from their screaming, tearful parents’ arms and thrown into the crocodile-infested waters. Today in America one out of five pregnancies ends in abortion.1 So many lives are senselessly cut short before ever getting to experience life outside of the womb.

We experienced firsthand the nonchalant nature in which abortions are routinely and clinically suggested when Jennie was pregnant with our first daughter. We planned to wait five years before having kids, but we’d been married less than a year when Jennie found out we were expecting. This was in the days before Pinterest and a proliferation of cute ways to break the news — she simply called me and told me on the phone. (I would not recommend that. I was in between meetings at work and almost fell over.)

We made an appointment with our physician to confirm the pregnancy. After Jennie’s blood was drawn, the doctor finally came in. He was a weaselly little dude, with glasses on the bridge of his nose and a big mustache. (I honestly have nothing against [mustaches]. If you have one, I’m totally cool with that. I’m just saying, his was pretty outrageous.) He came into the room, looked at the papers in his hand, and without even really looking at us said, “Yup. Yup. You’re pregnant.”

We were totally stunned, just sitting there absorbing this news, and he continued, “What do you want to do about it?” We looked at each other, having no clue how to respond. I was thinking, I guess we need to get a crib. Diapers. A Baby Bjorn. I have no idea how to install a car seat. My head is spinning. We’re not prepared for this.

When our response indicated how out of our depth we felt taking the plunge of parenthood, he interjected, his voice full of surprise, “Wait. You’re going to keep it?”

It was kind of like when you are at a restaurant, and you have only a tiny bit left on your plate, and you haven’t touched it for a while, and the waitress comes over to say, “Are you done with that, hon? Do you want me to get that out of your way, sugar?”

If you are done eating, you’d be like, “Oh, yeah. Just get that out of the way.”

That’s how easy in that moment it would have been to say, “Yeah, just get rid of it. It wasn’t a part of our plan, so no, we don’t want to keep it.” He made it so easy and nonchalant with his question.

I spoke up, “Uh, yeah. We’ll definitely be keeping it.”

At that point, he looked at us for the first time. Taking off his glasses, he said, “You know what? I think you two are going to make really great parents.”

Apparently the bar is really, really low. All you have to do is not kill your baby when you find out about it, and you are in the running for mother and father of the year.

I realize not every parent is ready to have a kid, and not every single woman who gets pregnant is in a place in life where it would be the best thing for her to raise a child, but there are tons of people all over the place who would love to raise your baby, even if you can’t. So if you ever find yourself pregnant but not wanting to keep it yourself, please don’t throw it into the river. There are people champing at the bit to have a child in their lives.

I’m not a guy who pickets Planned Parenthood facilities. But when I think about the statistics on abortion, all I can think about is what the world would be like without my daughter Alivia, who, while I write this chapter, is playing in the sand on the beach in Waikiki while with me on a preaching trip to Honolulu. We got up at 5:30 a.m. to get a jumpstart on the day and watched the sunrise together on a bench. Yesterday we rented boards and paddled out into the world-famous surf. She is ten years old and so strong and mature and wise beyond her years.

Moses’ parents weren’t willing to part with him either. They didn’t see just a baby when they looked at him. The Bible says that when Amram and Jochebed looked into his face, they saw that he was no ordinary child (Hebrews 11:23). The truth is that there is no such thing as an ordinary child. Every single person has value and a calling on his or her life. Guided by this conviction, by faith, they disobeyed Pharaoh’s command and hid Moses rather than tossing him into the river. Eventually his crying got too loud and so they resorted to floating him down the river in a little ark. Pharaoh’s daughter found him and adopted him as her son.

I find it fascinating that Moses’ life was spared through the river, because that same river was supposed to kill him.

The worst thing you endured should have killed you, but now God is going to use that pain to release power in your life. The devil might have meant it for evil, but God will use it for good. And not just for you but for those who are blessed through you.

Jesus’ life shows the same thing. The devil thought he had won as Jesus hung on the Cross. But little did Satan know that the Cross was actually an offensive weapon and would be his undoing. In God’s hands, what is meant to destroy you can become a source of rescue!

The best part of Moses’ story is that right after Pharaoh’s daughter claimed him, his older sister, Miriam, who had been trailing the basket as a spotter, jumped out of the bushes and offered to find a wet nurse for him. Pharaoh’s daughter loved the idea, and, of course, Miriam knew just the person. So Moses’ mom, Jochebed, ended up getting paid to raise her son until he was kindergarten-age by the man who wanted Moses dead in the first place. Don’t tell me God doesn’t have a sense of humor!

During those few precious years with her son, it is clear that Moses’ mother whispered his true identity to him and made it her aim to tuck promises into her son’s heart. Eventually these truths took hold and bloomed inside his spirit. Though he was raised in the palace and slept on Egyptian cotton, he couldn’t shake the thought that he was meant to live for more.

You know who is always watching? God. He sees the good and the bad. He sees every action we take and what we don’t do. His plan is loving and redemptive even through the most painful of circumstances! You are meant to live for more, too! Share your comments with us on our blog!